Relationship with Cemeteries, and Morbid Curiosity Cures the Blues: True Tales of the Unsavory, Unwise, Unorthodox, and Unusual. Her short stories have appeared in the books Best New Horror #27, Strange California, Sins of the Sirens: Fourteen Tales of Dark Desire, Fright Mare: Women Write Horror, and most recently in the magazines Weirdbook, Occult Detective Quarterly, and Space & Time.

Loren is an imaginative and skilled writer. We spoke of inspiration, editing, and cemeteries.

NTK: Welcome to Chilling Chat, Loren! Thank you for joining me today.

LR: My pleasure! I am really looking forward to chatting.

NTK: How old were you when you first discovered horror?

LR: I remember catching a glimpse of Barnabas Collins climbing out of his coffin when I was four. I didn’t know what I was seeing at the time, but the music was so deliciously creepy! I was definitely marked for life.

LR: Wow, it’s hard to choose a favorite. I loved Dark Shadows, Kolchak, and the monster of the week episodes of The X Files. Now I’m loving Legion, which might not seem like horror, because the main character/villain is presented to be so charming. He’s really quite terrifying.

NTK: Do you prefer villains or heroes?

LR: I prefer characters who wander from one side of the equation to the other.

NTK: What do you think makes a character believable?

NTK: When you write characters, do they have free will? Or are their actions predetermined?

LR: They definitely have minds of their own. I generally write to find out what I think, rather than the other way around, so I just wind my characters up and watch them go.

NTK:  Lily is a fascinating character in “Still Life with Shattered Glass.” What inspired that story?

LR: I was working at the University of Michigan as the Secretary of the Undergraduate English program. One of the perks was that I got to sit in on any English class I wanted, so I took all the creative writing classes. Students were strongly encouraged to “write what you know” so we read an awful lot of shitty roommate stories. I wanted to write a story where the reader wasn’t sure which roommate was worse. And I wanted to mock all the artistic pretensions that the undergrads were spouting.

NTK: “Still Life” is part of the anthology, Tales for the Camp Fire. Could you tell us what that anthology is about and what inspired it?

LR: Last November, there was a terrible wildfire in Northern California. Some of the power company’s equipment failed in a windstorm and threw sparks that burned for three weeks. The town of Paradise, California was leveled. The smoke from the fire was so bad that it could be seen from space. It drifted 200 miles from Butte County in the Sierra Nevada Mountains to settle in the Bay Area, where I live. For a week, we had the worst air quality in the world. So even if we didn’t lose anything directly in the fire, we were still affected by it.

The local chapter of the Horror Writers Association decided to help the survivors. Ben Monroe suggested we put together an anthology that we could use to raise money for survivors. I volunteered to edit. Tomes & Coffee volunteered to publish it. All the stories—even the one by Clark Ashton Smith—are donations. The cover art was donated by Petersen Games. Even the cover designer donated her time.

All of the book’s profits are going to the North Valley Community Foundation, which is a clearinghouse in Butte County that applies funds to the greatest needs.

NTK:  Horror writers are great people. What did you look for in a story, when you edited that anthology?

LR: Because it wasn’t a themed anthology, I wanted to include as wide a spectrum of horror stories as possible: creepy, gross, funny, disturbing, thought-provoking, nightmarish. I wanted something about the story to stick in your mind after you read it, a splinter that would work away at you.

NTK: What is your favorite horror novel?

LR: The one I’ve read the most is Dracula. I find something new in it every time I read it. Other than that, my second favorite changes from day to day.

NTK: You spoke of your inspiration for “Still Life,” what inspires you in general? What gets the creative juices flowing?

LR: I’m just trying to make sense of life on earth. It can be so beautiful and yet so tragic. We don’t seem to make it easy for each other, even though we’re all trapped here. I write to get to the heart of that.

NTK: Do you have a favorite horror film?

LR: Alien. The first one. I still find it scary.

NTK: Is it the fear factor, or the fact that people are pulling together to fight a greater evil that attracts you to the story?

LR: I like watching Ripley, who is marginalized and ignored, turn out to be right. She knows what the protocol is supposed to be, but the more-emotional men overrule her and get killed for it. Watching Ripley, who has discounted herself, realize that she’s resourceful enough to survive it is amazing. And the monster still haunts my nightmares all these years later.

NTK: You are a well-known cemetery aficionado and I have been dying to ask you this question, have you ever been to Colma, CA?

LR: Oh so many times!

LR: The absolute best. There are 17 cemeteries in town, one right beside the next. They range from Japanese to Chinese to Italian (full of sculpture) to Jewish to Catholic to a former Masonic cemetery to a former potter’s field. There’s even a pet cemetery!

They say 1 million people are buried in Colma but there are only 1,000 live ones.

Wyatt Earp is buried there, and Levi Strauss, and Emperor Norton (the only Emperor of North America and Protector of Mexico). It’s lovely and sad and full of treasures.

I don’t know if you know the history of the graveyards of San Francisco, but in the early 20th century, all of them were dug up and the bodies hauled to Colma. There are several huge mass graves down there. Even so, people keep finding bodies that were missed somehow and weren’t moved.

Several years ago, a woman doing yard work found an iron coffin with a little girl in it, still perfectly preserved, and visible through a glass window into the coffin.

NTK: Do you have any stories set in Colma?

LR: Not yet. I’ve written about it on Cemetery Travel (my cemetery blog) and in 199 Cemeteries to See Before You Die, but I haven’t set a story there yet.

LR: I’m finishing up a novel that I hope to have out in October, so I can sell it at the 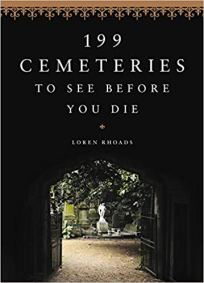 NTK: Thank you so much for chatting with me, Loren. You’re a terrific guest.

LR: Thank you so much for doing this, Naching! You asked some great questions. It was really fun.

You can purchase Tales for the Camp Fire: A Charity Anthology on Amazon.