Have you ever wondered what it’s like to be a teenager in a world overrun by zombies? What would you do to survive? Would you act as bait to lure zombies into a trap? Would 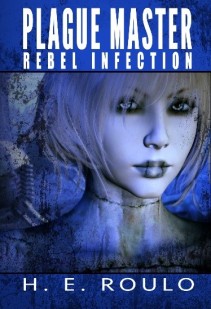 you create a weapon to combat the hoards? What if you became infected with the plague? What would you do if you lived in the Plague Master Universe?

H.E. Roulo’s Plague Master: Rebel Infection follows the journey of teenager, Trevor Seth, as he returns to his homeworld with a vaccine to cure the zombie infection. Trevor’s celebrity also makes him a dangerous threat to the powerful Founders and revolution is in the air. Trevor is caught in the middle and despite his homeworld’s troubles, a message from a Plague Master forces him to seek reinforcements on other worlds. He hunts for the woman he left behind, and an answer as to why the vaccine is failing.

Trevor and his friends must fight in space stations and worlds overtaken with the infected to discover the terrible truth about his cure.

Tune in to H.E. Roulo’s YouTube channel and get a sneak peek into the life of a typical teenager living in the Plague Master Universe. And be sure to check out Plague Master: Rebel Infection. Available now!