This is the first book I’ve read, by Collings, and if it’s any indication of his talent and skill as a storyteller, I’m definitely coming back for more.  Predators grabbed my attention from the opening scene and kept me hooked until the climax.

Collings’ story is peopled with an incredible cast of well-rounded and believable men and women.  I feel and sympathize with Evie Childs terrified, broken and shamed specter of a woman.  Craig Jensen’s pain is evident in his eyes and voice.  Bill Childs and Barney Eberhardt are vile, despicable men, yet still human and believable.  I’ve met some like them in my own life, and Collings’ portrayal of them is spot on.  There are several other characters, good and bad, that leap off the page, each of them compelling in their own way.  My favorite of them all, though, is Grams Jensen. 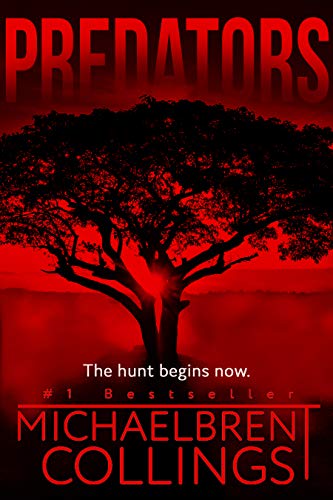 Grams is one hell of a tough, old broad; good-natured and friendly, yes, but all too willing and ready to flip you the finger and deliver a snappy comeback to a cheeky comment tossed her way.  I loved her from the get-go; she reminded me strongly of my own great-grandmother, a ninety-year-old Irish force of nature who I had the fortune of knowing in my childhood.  And that’s the mark of a true storyteller: characters you love or hate because they remind you so strongly of family and friends and enemies you know in real life.  Fictional men and women who make you laugh and cry, move you to tears and also spark anger in your soul because you know them.  You’ve seen them, met them, fought with them, loved them, hated them, mourned their loss and spit on their graves when they died.  Love them or hate them, they are real and powerful and reading about them stirs your very soul.

Now take those characters, throw them into the African wilderness, and put them all into a fight for their very survival.  Collings does this with the skill and pacing of a master storyteller.  He gets you to care about his characters; he gets you invested in them, and when he hits you with the knowledge, as they head out from their safari camp into the wilds of Africa, that the first of them will die in four hours, you find yourself fervently hoping that it won’t be Grams or Evie or Gunnar Helix or any of the other characters with whom you feel a connection.  You hope it will be Bill or Barney or one of the other more despicable people on the tour, but you know, you know in the depths of your soul, that when death comes, it will prey on good and evil alike.  And that knowledge keeps you turning the pages in feverish anticipation of what’s coming next.

Another element of the novel I greatly enjoyed was the mythic, folkloric feel of the tale.  It begins with a tale of a traditional hunt, the men of a tribe engaging in a ritual hunting of lions that quickly turns savagely tragic for the hunters.  The story then flows into what feels like a fairy tale, complete with the obligatory “once upon a time.”  Evie Childs, one of the main characters, further takes us down this path.  She is a writer, or at least used to be, and looks at the world around her and the people she encounters as characters in a grand story.  Evie assigns roles to the various people she meets while on safari in Africa; this one is a princess, that one is a demon “summoned from the Nether Kingdoms for a nefarious purpose.”  Evie’s story, and the way she sees those around her add another dimension to an already epic tale.

Predators, hands down, is one of the best books I’ve read in the last few years.  It’s going on my permanent bookshelf.  This is a tale I’ll be revisiting.