As we’re all going a little stir crazy (Cabin Fever marathon anyone?), more and more museums and exhibits are moving online. For Horror Addicts, there are some great options. It may not be the same as visiting it for yourself, but it’s the next best thing.

Just try not to get your computer haunted in the process.

In the 18th century, Paris ran out of room in their cemeteries and undertook the monumental project to move over 6 million corpses into the abandoned mines under the city. The result was the largest human grave in the world and a massive, mesmerizing piece of macabre artwork. I wrote about my experience in the Catacombs for the HorrorAddicts.net Next Great Horror Writer Contest (you can read it here!).

You can take a free virtual tour here.

The Winchester House is a winding, confusing mess of stairways and rooms with doors to nowhere and ghost traps strewn within. Built by Sarah Winchester between 1884 and 1922, it is said that construction continued around the clock in order to confuse the ghosts of those killed by Winchester rifles. Whether Sarah Winchester was genuinely haunted or actually mentally disturbed, we call all agree that her house is truly terrifying.

You can purchase the virtual tour here. 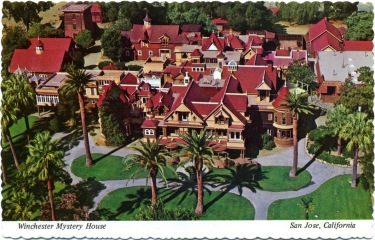 It might be safer than going in person anyway—less chance of getting lost.

The Queen Mary is an ocean liner that is now permanently docked in Long Beach California. More importantly, it is considered one of the most haunted places in America. Over 60 deaths have occurred on the ship including a supposed murder in one of the staterooms.

You can watch the tour (the same one given in person!) here.

If you’re a fan of the Conjuring movies (and all their many, many spinoffs), you may be interested to know more about the real-life house that the original movie was based on. Supposedly haunted by the ghost of Bathsheba Sherman, the house was investigated by Ed and Lorraine Warren in the 1970’s.

You watch some explorers walk through the house here.

This house in Fall River, Massachusetts is the site of one of the most famous murders in American history. Though Lizzie Borden was acquitted for the brutal ax murders of her parents, popular culture has remained fascinated by the story, producing dozens of books, movies, and tv series dedicated to the alleged murderess.

You can watch an (unofficial) tour here.

6 thoughts on “Daphne’s Den of Darkness: 5 Spooky Places You Can Visit Virtually”