Before deciding to take writing seriously Paul Lubaczewski had done many things–printer, caving, the SCA, Brew-master, punk singer, music critic etc. Since then he has appeared in 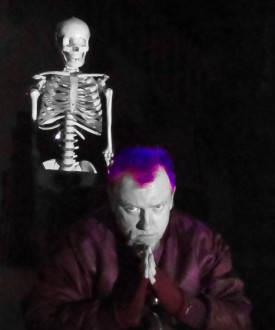 numerous science fiction, and horror magazines and anthologies. Born in Philadelphia, Pennsylvania, he moved to Appalachia in his 30s. He has three children, two who live in his native Pennsylvania, and one at home. Married to his lovely wife Leslie for twenty years, they live in a fairy tale town nestled in a valley by a river. Author of over 50 published stories, his Amazon Best Seller debut novel, I Never Eat…Cheesesteak, is available from Barnes and Noble, Amazon, and fine stores everywhere.

Paul is a man of wit and imagination. We spoke of horror, writing, and the fine art of Kaiju comedy.
NTK: Welcome to Chilling Chat, Paul! Thank you for joining me tonight.

PL: Thanks for having me.

NTK: How old were you when you discovered horror?

PL: Very young. When I was a little kid, for Halloween every year, my Mom would read the original Washington Irving “Legend of Sleepy Hollow” and we’d watch the Lugosi version of Dracula.

NTK:  Did this inspire you to write?

PL: I’ve read like a sponge, more or less, all my life. So, creating my own worlds was only a matter of time I suppose.

NTK: Do you have a favorite horror novel? Or short story?

PL: As of this exact moment, right now, today, I really loved Jeff Strand’s Pressure. Short will probably always be a tie between Lovecraft’s “The Rats in The Wall” and Poe’s “The Tell-Tale Heart.”

NTK: Who is your favorite horror writer?

PL: I think Horror is such a many faceted thing, it’s hard to pick one. Right now, I’m on a McCammon tear, all time would probably still be Poe. I had a copy of Tales of Mystery and Imagination when I was a kid. My next tattoo is going to be Arthur Rackham’s illustration for “Metzengerstein.”

NTK: Do you have many horror inspired tattoos?

PL: That’s the first piece I’ve gotten that’s directly tied to something, but I’ve wanted it for a very long time.

NTK: Do you enjoy comedy and horror?

PL: I’d better, I write it. Horror-Comedy is probably one of the most popular but most poorly served by the industry. Maybe it’s because it’s hard to write, and it is, but it seems to sell well, so people enjoy reading it. I tend to think it’s lack of enthusiasm on the industries part, they don’t know where to pigeon hole it, and that makes bean counters nervous.

NTK: You said it’s hard to write. Which is more difficult? Scaring people or making them laugh?

PL: Knowing when to turn on one fountain and when to turn on the other. You have to have some horror, but if you turn it on too hard, well nothing seems particularly funny now. And if you play everything for yucks, it makes it hard to slide back in to scary. It’s a balancing act. I find that generally it’s better to stay towards funny but have your scenes where you crack the coffin open wide.

NTK: What did you think of the old Roger Corman movies, particularly the ones with Vincent Price and Peter Lorre? Did they tread that fine line between horror and comedy for you?

PL: Well it helped that he had some absolute hams working for him and gave them a ton of free reign. Price was really a master of playing for yucks in the middle of a horror movie. The end scenes in House of Long Shadows are classic funny. I think my favorite from that era was Fearless Vampire Killers, I even have one of the original theater posters, which is huge.

PL: Witches is just a “where you live” book. Granny Witches are popular lore here.

NTK: Can you tell us a little about Cult of the Gator God? And what is Kaiju comedy? Are we talking about Kong and Godzilla here?

PL: Cult of the Gator God is a fish out of water comedy mixed with giant creatures who are also worshipped as gods by the locals. But yes, full-blown, old school kaiju in America, with jokes. I lived in Florida for a year, so, being from the North East, I could readily empathize with my main character Bob.

NTK:  Do you outline your plots or fly by the seat of your pants?

PL: Total pantser. It’s like the line from the Dark Tower books where King is yelled at by a fan for killing off a character and he says something along the lines of, “Lady, you found out it was going to happen right after I did.”

NTK: Do your characters have free will, then? Do they often take over your story?

PL: Let me put it this way, I have an upcoming collection, there’s a novelette in there called “The Lost Saga” It was supposed to be a gag piece at around 3000 words, after I had been worked over by the characters it was an eleven-thousand word, proper Norse Saga, with a full blown horror ending because…hey what do I know, I’m only the writer here.

NTK: Do you have a favorite horror movie?

PL: You’d have to narrow that down to genre. I was the kid in school who took out all the tabletop books about horror movies out from the school library and the town library. I can go anything from silent, Caligari, to Hammer, Dracula Prince of Darkness, to slasher, currently Terrifier. Horror gets a bad rap, but it has WAY more range and depth as a film genre than anyone gives it credit for.

NTK: Let’s narrow it down to scariest.

PL: I rarely get officially scared. I think the last one that made me really freaked out, like “We have to watch something really light so I can sleep tonight.” was probably Henry Portrait of a Serial Killer. The director knew all the rules of a movie, how things are supposed to go, and played them all against the audience.

NTK: Do you have a favorite horror TV show?

PL: If you’re including the Kolchak movies, them hands down. Night Gallery is something I’ve seen creep in to my short story writing though. That whole, “Your main character is scum, and he/she is going to get theirs all right” vibe. At this point I’m still watching the Walking Dead out of obstinance to see how it ends.

PL: Well my least favorite is definitely “May you live in interesting times” since we seem to be doing it, and it’s no fun. But let’s go back to The Wolf Man and it being treated like a curse, with it’s own cool couplet and everything, “Even a man whose pure of heart…”

PL: The f-bomb is the most versatile, you can use it from adjective to noun in any way shape and form. But gosh, I sure do say prick a LOT

NTK: (Laughs.) Paul, what does the future hold for you? Do we have more Kaiju to look forward to? What’s next on the book release agenda?

PL: Next off will be a collection with Dreaming Big Publications called A Spoonful of Sugar. After that, I’ll probably have something short again with St. Rooster. Wild Witches of West Bygod is all written and just waiting to be put into a release schedule so probably next year. There’s more after that, but a lot of it I’m still writing and editing.

NTK: Thank you for chatting with me, Paul! It’s been fun!

PL: Thank you, and it has been fun, thanks for that!