Night of the Sasquatch by Keith Luethke is a horror story about a family’s encounter with a clan of Bigfoot. The interesting wrinkle in this entry into cryptid fiction is Luethke tells the story from the points of view of the family and the Bigfoot. 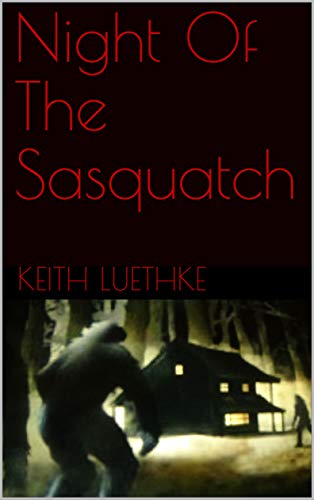 Night of the Sasquatch begins as the typical cabin-in-the-woods trope with newly married couple Wein and Stacy traveling to a mountain cabin for a honeymoon weekend with their five-month-old daughter Valery. During a grocery stop on the way, a stranger appears just long enough to warn Stacy to “stay out of the woods.”

The story soon shifts to the clan of Bigfoot alarmed by the arrival of humans. Living in a nearby cave, the Bigfoot characters have names and distinct personalities, and the males are engaged in a power struggle for leadership of the clan.

Members of the Bigfoot clan watch the human family in the cabin and try to warn them off with rocks. Their action prompts a call to police and a detective’s decision to watch the cabin for the remainder of the night.

The Bigfoot clan members argue over what to do about the humans. Should they leave or attack? Their decision fuels the action-packed climax, ending with acts of self-preservation and humanity in the pulse-pounding finale.

Night of the Sasquatch is an entertaining break for Bigfoot fans and takes less than an hour to read.

NEXT UP: Chapter Sixteen: Something in the Woods. I review the 2015 film directed by Tony Gibson and David D. Ford.

2 thoughts on “THE BIGFOOT FILES | Chapter Fifteen: Night of the Sasquatch”