Seance on a Wet Afternoon – Oscar nominated medium Kim Stanley (The Right Stuff) and her husband Richard Attenborough (The Great Escape) star in this moody black and white 1964 British two hours based on the Mark McShane novel. Shadows, candles, weeping ladies in pearls, and whispering circles set the tone immediately alongside classy contemporary touches such as driving goggles, sidecars, phonographs, and old fashioned, cluttered interiors – it’s sixties, but with a faux Victorian mysticism. The lady of the house is domineering, claiming her plans have the blessing to do what needs to be done, yet she wishes she were normal instead of channeling sorrow and makes her weak, complacent husband do the dirty work. Is she crazy or is something paranormal at work? Talk of a mysterious, maybe ghostly, maybe imagined “Arthur,” peepholes, boarded up windows, school bells, and gaslighting actions make the audience take notice. There is a lot of talking set in the few rooms of a creepy, oppressive house, however, the unreliable mindset hooks the audience without insulting us. Dangerous drives, escalating music, and camera zooms accent any slip-up and or the chance for things go wrong while the editing of a ransom note is almost humorous in its casual word choices and disturbing calculations on this “borrowing” plan. Viewers both understand and like these perpetrators – they are at one strong enough to pull this off yet incredibly vulnerable and taking tremendous risks. However, we are also disgusted by their hospital ruses and psychic ploys even if we feel sorry for the villains, victims, and agree with a rightfully skeptical father and suspicious law enforcement. Tensions escalate along with the crimes – what was once such a perfect plan orchestrated by an unstable wife is now we, we, we intense and ready to snap with the heat showing as sweat on everyone’s brow. Layered tours and intercut chases up the nail-biting twists as one séance too many might unravel this chance to be famous by solving your own crime. Well acted intensity and warped grief make this taut little thriller perfect for a rainy day.

Triangle– Black Death director Christopher Smith creates a great mind-bending and smartly head-scratching ride in this watery 2009 Bermuda triangle thriller.  There are a few scares, but the within-storytelling and multi-level camera work develop more of a thinking viewer’s Twilight Zone heavy before full-on gore or modern slasher horror.  A decrepit and sinister ship, carefully placed mirrors, dual appearances and deceptions, and altered audience perceptions layer the plotting and paths for desperate mother Melissa George (Turistas). Though it boy Liam Hemsworth (The Hunger Games) is iffy, his role is relatively small. Hefty concepts, time twists, and intelligent debate outshine any small scale productions here, too.  I’d like to say more, but I don’t want to spoil anything! 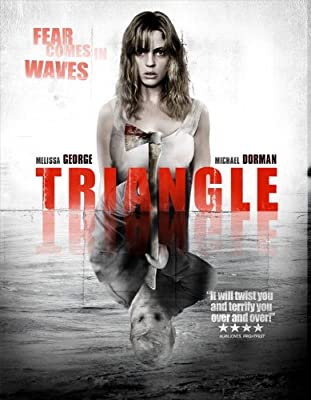 Writers Retreat – Novelists face their fears in more ways than one at this 2015 island workshop with high tide isolation and no internet or cell phones. Awkward book signings, contract deadlines, angry agents, dead vermin, and highway mishaps assure this meeting is off on the wrong foot for our introverted strangers. There’s one emergency landline, and the ice breaker exercises, manuscript focus, and writing discussions are more like therapy for this diverse group. Writers are weird by nature, however some are more pretentious than others, rolling their eyes and creating tension over what they consider hack manuscripts if the wounded amateur is upset by their critique. Staring at the blank laptop screen, long hand journaling, inspirational photography, and subjects going off by themselves provide withdrawn writing routines but the notebooks, clicking keys, and angelic, panning montages make it seem like we’re witnessing something mystical in action when writing is a lot more complicated than that. Brief sentences read aloud reveal much about these characters in need of validation, for a few aren’t even writing at all before sudden disappearances, red herrings, and inside/outside, voyeuristic camera framing to match the lurking men, misogynistic threats, and gory evidence. Private moments away from the workshop make the viewer pay attention to the individual prejudices, flirtations, preferences, drinking, history, and self-harm. Everyone has their issues, but is anyone willing to kill for the ‘write what you know’ experience? Mysteries and relative truths escalate into horror with hammers to the head, stabbings, and rap tap tapping on the windows let in for some slicing and dicing. Vomiting, blood, pointing fingers, and power outages accent the writing angles and slasher styles as deliberate reveals, torture instruments laid out in the kitchen, eyeballs on the platter, and a glass of wine provide scene-chewing villainy. Unfortunately, the intriguing, sophisticated start does devolve in one fell swoop with haphazard running around, dead body shocks, and knockouts or tie-ups that happen too easy. There’s no one by one crafty kill or time for our intelligent writers to piece the crimes together – or not reveal what they know because that nugget would be a great piece for their manuscript. Creative corkscrew uses, torture porn, and one on one gruesome go on too long, unraveling with loud boo crescendos for every hit, stab, and plunge making an injury seem so severe before the victim inexplicably comes back for more. Although the final act and the predictable bookends deserved more polish, this is worth the late-night look for both writers and horror fans.

And Some More Terribly Wet Fun

Creature from the Haunted Sea – Oh, Roger Corman, you’re killing me with this 1961 horror comedy remake of Beast from Haunted Cave! The black and white Beatnik opening chase looks like the Beastie Boys “Sabotage” music video.  The sound, music, bad narration, iffy Spanish, and worse dialogue are very poorly mixed. The poor acting, over the top spy and noir spoof vibes come off all wrong, and the animated credits are downright corny.  I think I get what Corman was trying to do, but the confusing Cuban plot with Beetles and Winnebagos on the chase is too low budget college-kids-with-a-camera. Who’s in charge on this boating escapade- military Cubans? Gold digging Americans? Monsters? Murderers? The singing, crappy spies, a guy who speaks in animal sounds- this is just a really surprising mess. I mean, somebody gets hit with a fish!

Phantom from 10,000 Leagues – Yes, the titular beasty from this 1955 proto-AIP science fiction feature looks completely hokey. It’s tough to tell who is who at the start, and slow talking scenes with poor acting and wooden romances damage the entertaining pace and humor from the action sequences. The weak, simplistic science is also laughable today, and they even pronounce it Mu-tant with a long A! Nighttime footage is tough to see, and the hour and twenty here seems too long. How many times can the same guy go diving for this monster? Fortunately, the drowning scenes and underwater photography look decent with good music and suspense pacing to match.  One can enjoy both the period expectation and/or guffaw over the corny at the same time. This one feels good for a fun night in theme with other sea creature features, but perhaps it is just too flawed to completely enjoy on its own.