Released in 2014, Sasquatch by K.T. Tomb is Book 1 in her five-book Sasquatch Series. It’s a throwback adventure story about a motley crew of investigators hired by a wealthy cryptozoologist to find the legendary creature. 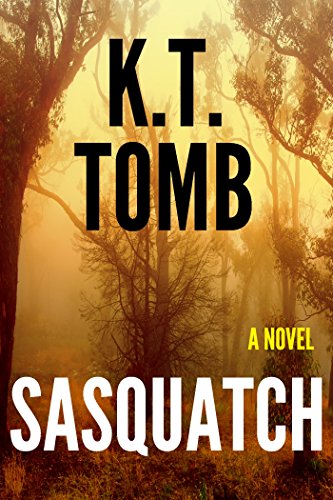 The team is led by a conflicted but strong female character named Lux Branson. Lux is a professional tracker who’s talented but broke and needs the money offered for the job. Her task is to guide a group of four people, including an anthropologist and a biologist, deep into the Piney Woods of Texas and return with proof of Sasquatch.

Lux is not a believer in cryptids, but once in the forest, she starts to see proof of something lurking in the woods. However, she can’t shake the feeling the trip may be a hoax even as the evidence piles up.

When the team’s anthropologist commits an overzealous act in the name of science, Lux must face the shocking truth and rely on her instincts to survive.

Lux is the heart of the story, and I liked her. She was tough but not invincible, and she showed the fear of a normal human. Lux reminded me of a less tech version of Sanaa Lathan’s guide character Alexa Woods in the 2004 film Alien Vs. Predator.

With a couple of surprising encounters in the second half, including a stunner near the end, Sasquatch is a memorable series opener sure to please readers of Bigfoot fiction.

NEXT UP: Chapter Twenty: Track: Search for Australia’s Bigfoot. I review the 2020 documentary.

OTHER BOOK REVIEWS FROM THE BIGFOOT FILES

THE BIGFOOT FILES | Chapter Fifteen: Night of the Sasquatch

THE BIGFOOT FILES | Chapter Four: ‘The Road Best Not Taken’