I was going to wait and do this project as a morose February Valentine, but after my His and Hers Three Dimensional Skeleton Frames, I was too excited about this Love is Love Skeleton Wreath!

Despite dollar store skeletons in hand, part of the delay here was originally seeking an oval frame – two skeletons, a few roses, an ornate black surround, goth splendor, fin. However, new thrift frames went to the latest additions in the Lenticular Gallery, and the large wreath frame dismissed from the Mini Skeleton Wreath now took center stage. The floral stash provided red flowers, purple pop, and black leaves, but when I came upon my feathers drawer, I knew this was destined for rainbow flair! The black elements were ditched in favor of green leaves and green feathers stolen from a St. Patrick’s Day boa to go with the abundant orange, yellow, blue, and light purple feathers. Wrapping the frame in red tulle also found in the craft stash provided a solid base for hot gluing the red flowers and green leaves around the top half of the frame. Next came the skeleton couple, who were surprisingly cumbersome folks! The legs were removed, but an arm on either one was also displaced so their rib cages and skulls could be glued together. Without so much surface area on their little bones, it took a lot of hot glue pressed and held in place until the skeletons set. Rather than distinct hair or hat, this hugging, universal, eternal couple was glued as is to the bottom of the wreath with their arms bent and glued in place for more love and support. 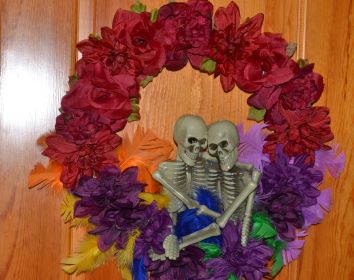 The rainbow spread was arraigned and laid out before the purple flowers were glued along the bottom to finish the frame coverage and hide the skeletal ends. Working from their center across helped keep the assorted blooms semi-symmetrical before the orange, yellow, blue, green, and light purple feathers filled in the gaps. The red flowers already stood out with goth glam, leaving no need for red feathers, but the two different purplish shades became the requisite indigo and violet. Being one who prefers black or dark aesthetics, I didn’t have more colorful rainbow motifs, but that’s okay. Using what was in the craft stash required more outside the box thinking, and by eliminating black accents that would scream Halloween, this colorful goth décor can be hung up for fall, February, or Pride. At $3 for the frame and skeletons and maybe $7 worth counting flowers and feathers cost, this done in a day whimsical wreath is affordable, unique, sentimental, and fabulous!

One thought on “Kbatz Krafts: Love is Love Skeleton Wreath”