Content warning, there will be a non-graphic discussion of sexual assault and rape in this review. 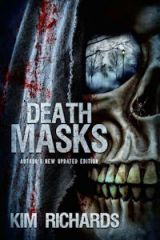 I finished Death Masks by Kim Richards a few days ago and I’ve been rolling it around in my head, trying to decide what I thought about it.

After some thought, my take is that Death Masks has two stories, one I enjoyed quite a bit and one I didn’t care for very much at all.

Both stories revolve around Bill. On the surface, Bill is a fairly stereotypical character if you asked for a standard model “IT professional”: out of shape, overweight, plays video games on his lunch break, not much for physical activity, or being outwardly social. If that was all there was to him, he’d be a fairly boring, one-dimensional character, one we have seen in countless other books and media featuring awkward, doughy men who have grown up and managed to make their adolescent computer nerdery their profession. However, what saves Bill from being a caricature is the emotional realism that Kim Richards uses when writing him, in particular regarding his relationship with his girlfriend Dixie, and that is the story, their relationship, that I enjoyed most in this book.

Dixie is the opposite of Bill in pretty much every way. Smaller where Bill is large, conventionally attractive for a woman while Bill is kind of a slob, Dixie is a nurse at the local hospital, a profession that works with people while her boyfriend works with machines. She’s an artist, primarily working with sculpture and plaster casts, and athletic in that she works out, goes jogging, and enjoys social dancing, particularly salsa, while Bill would rather drink a six pack, eat some pizza, and shoot pixel zombies. If Bill was true to the stereotype, he might try to passive-aggressively keep Dixie from the things that she enjoys that he doesn’t care about, particularly if they could threaten his relationship with her (like the dancing), but instead Richards writes him in a mature fashion, that even if he isn’t into the things Dixie enjoys, he supports her love of them because they bring her happiness and feed her soul. Early in the book, in chapter three, we have a great example of this as they go “dancing”, or Dixie goes dancing and Bill watches her. While he does acknowledge the occasional pang of jealousy, the focus is more on enjoying Dixie’s happiness and wanting to support her (it doesn’t hurt that she’s gorgeous and it’s a turn on for him to watch her dance). The same goes for her art; she has her own space in the basement that he remarks could make a good home office for him so he could do work from home more easily, but that would mean impacting her personal artistic space and he’d rather not. Seeing the consideration he pays her in regards to the things she enjoys (and the fact that she never gives him crap about his own interests that she doesn’t share) was a nice change of pace and a nice break from an otherwise stereotypical character.

The other aspect of their relationship that made me enjoy this part of the book was how Bill tries to support Dixie’s mental illness. Dixie suffers from depression and anxiety, primarily linked to particular times of the year such as fall and winter as well as Christmas specifically. This illness impacts how she interacts with Bill, at times being snappish or making things more difficult as he tries to navigate the complexities of her illness, and impacts her life in all of the myriad ways that depression and anxiety can. Not once does Bill treat her with anything less than respect and understanding and while he does worry about her, he doesn’t make his concern her problem so that she has to manage him managing her illness. He speaks with her counselor to strategize on ways he might be able to help her and he tries to be thoughtful about her condition. As someone who has had people close to him deal with such illnesses, watching Bill do his best to be helpful and take care of Dixie felt familiar and very real in a personal way.

While those were the main aspects of Death Masks that I enjoyed, the rest of the plot wasn’t to my tastes.

The main conflict of the other plotline of Death Masks is Bill’s interactions with an unknown assailant. Early in the book, Bill has what might be a very minor heart attack and it scares him into action to try to better his health. In order to do this, he decides to take up walking (with the intent to move up to running when he’s in better condition to) and goes to the nearby park. While on his first foray into fitness, he comes across a scene on one of the paths: a thin figure hunched over the fallen body of a young man, another jogger. Thinking the man on the ground is being robbed, Bill tries to intercede but despite the size difference, the attacker being much smaller, Bill is quickly overcome and rendered unconscious. Before he is clubbed over the head with a rock, he looks up into the face of his attacker and sees a skeletal visage looking back at him.

We as the reader are given glimpses into the attacker’s mind, a serial killer who uses a syringe full of some unnamed drug that almost instantaneously paralyzes those injected with it. We later learn that the killer targets men of a particular standard of physical attractiveness, stalking them from the bushes of the park’s jogging trails before ambushing them and taking them away to be buried alive while still paralyzed. Throughout the book we come to learn the attacker’s motivations, that they are seeking revenge for childhood wrongs perpetrated on them by their brother and his friends, a gang of drug-using thugs and criminals who sexually assault the attacker, first as what they were told was a gang initiation and later on just because they could.

Can I just say that I am extremely tired of this use of sexual violence in fiction? Need to have a woman with a traumatic backstory? Have her be raped. Got to give a killer a reason for revenge? They were sexually assaulted. Have to put the female main character in a situation where they are in harm’s way? Have the threat be the explicit potential of them being raped. The use of something so serious feels lazy and, to me, disrespectful. With how traumatic real-life sexual violence can be, using it as the defining moment for why the villain is evil feels like it cheapens the reality of it for me and, depending on your reading, might not speak kindly to victims of such experiences.

That said, the parts of the book that involve the park stalker struck me as unrealistic. A drug that works the same on people of various body types, regardless of how much they are given, without some suffering side-effects from the drug and nearly instantaneously? The police, when they are involved, are needlessly antagonistic and almost painfully disinterested at times. Despite the fact that the killer racks up a nine-victim body count, there is no rising consciousness of people of a particular gender going missing after visiting the park until very late in the book and, even then, the police are almost entirely dismissive of anything Bill has to say. Finally, in the end, Bill realizes the true identity of the killer when he hears their voice, recognizing it, but somehow fails to do so in their first encounter when he hears the killer speak. The twist of the reveal of the killer’s identity wasn’t really much of a twist and despite the killer’s earlier martial prowess, sweeping Bill off his feet, pinning him to the ground, and clubbing him unconscious, none of that was apparent in the final confrontation.

My other criticism of the book is that the ending felt rushed, the final showdown only a few pages long.

While I feel like Death Masks started out strong, with Bill and Dixie being complex and well-rounded characters, the killer felt flat and disinteresting in comparison. With the rushed ending and some plot details that seemed inserted only to provide ineffective blinds for the killer’s true identity, the unfortunate impression I’m left with is one of a missed opportunity.