For the first Nightmare Fuel of the season, I want to visit a legend from my old hometown of Pittsburgh, PA. Allow me to tell you the tale of the Congelier House, often referred to as “The Most Haunted House in America” and “The House the Devil Built.”

The house was built in the 1860s in the Manchester neighborhood on Pittsburgh’s North Side by Charles Congelier, a gentleman who made a fortune in the South. He lived there with his wife, Lyda, and their maid, Essie. According to the legend, in 1871, Lyda discovered her husband in bed with the maid and snapped in true horror fashion. Grabbing a knife and a meat cleaver, she ended the affair by brutally stabbing Charles and decapitating Essie. Lyda was discovered by a family friend several days later in her rocking chair, gently stroking Essie’s severed head. 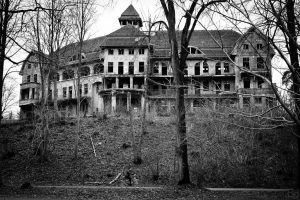 After that, the home remained empty for almost twenty years before being purchased by a local railroad company in 1892. The company converted the house into several living quarters for their workers, but shortly after, stories circulated about strange sounds and other activities, including ghostly figures. By the turn of the century, the home sold again, and the legend only gets stranger.

In 1900, an immigrant by the name of Dr. Adolph C Brunrichter purchased the Congelier House. True to a serial killer profile, Dr. Brunrichter was a quiet man who kept to himself in a reclusive manner. Then, on August 12, 1901, a woman’s scream and the bright explosion of light from the house prompted neighbors to call the police. They discovered a woman’s decapitated corpse and a secret laboratory in the basement containing five heads. According to his notes, the good doctor was experimenting on methods to keep the heads alive after their removal. Unfortunately, Dr. Brunrichter vanished without a trace. In 1927, a drunken man claiming to be him was arrested and later released when police could not corroborate his story.

The Equitable Gas Company purchased the house, intending to convert it back into apartments for their immigrant workers to live. Not long after, stories of demonic voices began circulating among the tenants. It was only after two of their own were found murdered in the basement that the workers refused to live there. They blamed it on whatever spirits inhabited the home since there was no way for the killer to have escaped. In 1927, a natural gas explosion destroyed much of the neighborhood, leaving the Congelier House a smoldering crater. Locals believed that the house was transported back to Hell.

As with many other legends, there is more fiction to the story than fact. There are no records of a Charles Congelier having lived in Pittsburgh at the time, nor of the double homicide. There is also no evidence of Dr. Adolph C Brunrichter even existing. At one time, Mary Congelier owned the home, but that ended with the explosion in 1927. While it didn’t destroy the house, broken glass severed an artery in her leg, causing her death. The home was later torn down, along with the other damaged buildings in the area after the explosion. Even without facts to back it up, the Congelier House legend continues to this day.

Until next time, Addicts…

One thought on “Nightmare Fuel: The Congelier House”