“The Asian Myths and Monsters of Tortured Willows” 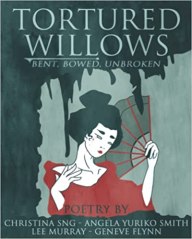 Southeast Asian mythology is much less familiar territory for many horror fans. While vampires, werewolves, and zombies are well-known, creatures such as the tiyanak, the penanggalan, the pontianak, and the nukekubi are less so. Does that make them scarier? Let’s dive in and see.

Tortured Willows is a newly released collaborative collection of sixty horror poems by four of the authors from the Bram Stoker and Shirley Jackson award-winning anthology Black Cranes: Tales of Unquiet Women. Angela Yuriko Smith, Lee Murray, Christina Sng, and Geneve Flynn showcase some of these creepy critters in their poetry. In this blog series, we chat to each of the contributors about their monsters.

LM: Please tell us a little more about the themes you explore in this collection.

GF: There were a few things happening in the cultural and political spaces in Australia when I was writing my poems. There had been allegations of rife sexism, sexual misconduct, and assault within our parliament, and there has been growing fury at how gendered violence has been handled by the press, the justice system, and the government. Tortured Willows offered a place for me to express some of my own anger and frustration at our very “blokey” culture. I also wrote about my experience of racism as part of the Chinese-Malaysian diaspora. They were the some of the same themes I touched on in my stories in Black Cranes; but, in Tortured Willows, using poetry, I was able to explore these themes from different angles and in a more targeted way.

LM: Your poem “Penanggalan’s Lament”, a favourite of mine, features one of the most gruesome creatures from Southeast Asian mythology. Please tell us more about her and what she symbolises in your work.

“penanggalanfullj.jpg” by Kurt Komoda is licensed under CC BY-NC-ND 2.0

GF: The penanggalan is a Malay vampiric creature that is thought to be a woman who accidentally curses herself with black magic in the pursuit of beauty. She is supposed to soak in a vat of vinegar and eat no meat for forty days. However, she breaks her fast early and becomes monstrous. At night, she detaches her head from her body, trailing organs as she seeks out newborns and pregnant women to feed on.

I immigrated to Australia only a decade or so after the White Australia Policy was abolished. I was often one of the only Asian kids in school, so I faced racism and abuse. I spent a lot of my childhood and teen years wishing I had blue eyes and blond hair. The idea that you could damn yourself in order to look a certain way resonated with me. Here is an excerpt from my poem:

“All you have to do: soak in vinegar,

hide in a vat; no meat for forty days.

The girl agrees, wakes up, still in a haze.

She’s one of them, not chink: so white, all ways.

But she forgets: each deal you buy, you pay

your life, if you want to have that body.

LM: Hungry ghosts feature in your poem “Inheritance”, a text which I found both evocative and insightful. What are hungry ghosts, and how did you showcase them in your work? 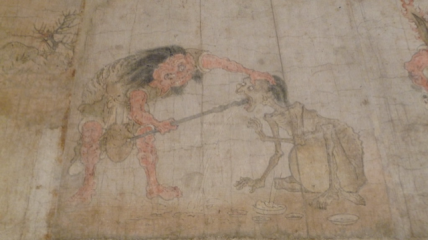 “The Realm of the Hungry Ghosts, Photo 6” by feministjulie is licensed under CC BY-NC-ND 2.0

GF: Hungry ghosts are said to arise when a person commits an evil deed or suffers a terrible death. When they die, they are tormented by insatiable desire for the one thing they sought most in life. The hungry ghost has a swollen belly and a tiny mouth, and can never be fulfilled. I wanted to write about the opportunities denied to Chinese girls and women, simply because they are often viewed as only fit for filial duty. What does it do to a person to be continually told, no matter your potential, you are only good for one thing? Would it turn you into a wraith, forever chasing validation? Here’s an excerpt from my poem:

Was that when you first

began to swell? Your stomach

the burden, the second-hands,

Did your mouth begin to draw

when you were left behind,

your splendid mind with

only hunger and no choice

but to turn upon itself?

LM: Thanks so much for introducing us to some of the mythology that features in your poetry. If you’d like to read the poems mentioned in this blog series, Tortured Willows is available from Yuriko Publishing.

“It’s clear Murray, Flynn, Sng, and Yuriko Smith are nowhere close to finished sharing all of the poems within them, but this is a fine rare gathering you’ll want to revisit time and

“Women live with spectres gifted to us by our experiences. Tortured Willows breathes life into these shadows, reminding us that what has shaped us has not broken us.”—Piper Mejia, author of The Better Sister & Other Stories

“A haunting, harrowing exploration of obligation, expectation, and sacrifice, poetry as unquiet fury and a lens on both past and present. Told in four unique voices yet speaking for countless silent generations of Asian women, Tortured Willows grips you by the throat and screams into the night, demanding to be heard.”—Dan Rabarts, award-winning author of the Children of Bane series

“This collection of poetry, without a doubt, will forever remain one of my all-time favorites. No matter how hard I pulled at the reins, I could not stop until every last poem was inside of me.” —Cindy O’Quinn, two-time Bram Stoker Award®-nominated author

The willow is femininity, desire, death. Rebirth. With its ability to grow from a single broken branch, it is the living embodiment of immortality. It is the yin that wards off malevolent spirits. It is both revered and shunned.

With exquisite poetry, Christina Sng, Angela Yuriko Smith, Lee Murray, and Geneve Flynn invite you to sit beneath the tortured willow’s gravid branches and listen to the uneasy shiver of its leaves.

Geneve Flynn is an award-winning speculative fiction editor and author. She has two psychology degrees and only uses them for nefarious purposes.

Geneve was assistant editor for Relics, Wrecks, and Ruins, a speculative fiction anthology which features authors such as Neil Gaiman, Ken Liu, Robert Silverberg, James (SA) Corey, Lee Murray, Mark Lawrence, Mary Robinette Kowal, and Angela Slatter. The anthology is the legacy of Australian fantasy author Aiki Flinthart, and is in support of the Flinthart Writing Residency with the Queensland Writers Centre.

Geneve’s short stories have been published in various markets, including Flame Tree Publishing, Things in the Well, and PseudoPod. Her latest short story, “They Call Me Mother,” will appear in Classic Monsters Unleashed with some of the biggest names in horror, including Joe Lansdale, Jonathan Maberry, and Ramsey Campbell.

Geneve loves tales that unsettle, all things writerly, and B-grade action movies. If that sounds like you, check out her website at www.geneveflynn.com.au.