I always wondered why I couldn’t think straight.

Then, when I hit sixty, I got myself a patient with ADHD. He described his affliction as being akin to watching two TV channels at once and trying to keep up with the plots and that struck a profound chord. The body of this article is simply a personal history which leads you back to this point, so why not skip to the Conclusion?

At primary school, my teachers had always called me a “dreamer” and I received many a scolding for simply not paying attention. But I was, as far as I could. My mind was on many other things at the same time.

Academically, I was always near the top of the class even though the effort it took to study was indescribably superhuman. I did this for my parents, who were pretty much my world. And that’s another thing; I was raised an only child and more or less a shut-in. Mummy and Daddy didn’t believe in letting their little darling rub shoulders with the hoi-polloi, so I had no one with whom to compare my feelings and experiences.

Crucially, it also meant that the normal process of socialization did not take place in my brain and that’s like language; if it hasn’t happened by a certain age, it never will. That part of the brain never develops.

I made it through high school by means of an effort I would struggle to find words to describe while being the “weird kid” who was bullied until he grew big enough to kick the sand right back in their faces.

University life was qualitatively easier although focussing enough to study was still a near impossibility. Having obtained my first degree (psychology!), I dropped out of the mainstream and bummed around France and Italy for a couple of years, then settled in the country, doing physical labour for a wage. I had hoped that the solitude would calm my raging mind. It didn’t.

My second degree was in medicine and I got used to the pain of 120-hour weeks trying to keep my mind on what it was supposed to be studying. I went on to run three clinical practices, teach in college, supervise in the teaching-clinics and act as an expert witness in court.

With the subject of this article in mind, it should have been a big, red hint when I grew bored with this life and decided to move to the Isle of Skye, where I bought myself a restaurant and applied the culinary skills I had learned in France and Italy.

Thanks mainly to my wife, Ann, it was a success but here’s the point:

During this whole time, ever since I began studying for my first degree, I was self-medicating with alcohol. Vast amounts of alcohol. Every day. Looking back, I see that I was what is now termed a high-functioning alcoholic. For decades. It was the only thing that gave my churning mind some respite.

I got on top of that in my fifties by a simple act of will and, as I sobered up over the following decade, a number of things became clear;

1) I was mildly dyslexic.

In my school years, dyslexic people didn’t have a problem; they were just “stupid.”

2) I had never achieved socialisation.

This meant that I responded just like a sociopath; by mimicking others.

3) I had an “artistic temperament.”

Whether or not one has any degree of talent, “artistic” individuals feel things far more profoundly than the average and are therefore prone to depression. I was raised in a society where depression didn’t exist. You simply “pulled yourself together” and got on with it.

4) There was still something wrong with my thinking.

My ADHD patient was the trigger for a revelation.

Naturally, when I was younger, ADHD didn’t exist. Certain individuals were merely “disruptive” or “dreamers” and frequently wound up in the prison system and I could certainly understand why. From my own experience, it wasn’t like watching two TV channels at once; it was like watching four, while someone was playing loud and intriguing music next door.

My mind would thrash itself to pieces on the myriad tiny details of some problem and have them all lined up and standing to attention in seconds, while completely ignoring a major and obvious flaw in the solution.

There are also major elements of imperative instant gratification, as well as an obsessive-compulsive component.

Following our conversation, I decided to do some research and it took no more than thirty minutes to make a self-diagnosis of ADHD. Diagnosing or treating oneself or one’s family is never a good idea however, even if the solution seems obvious; it is quite simply far too subjective in ways that are completely invisible. I was therefore a good boy and consulted a psychiatrist in order to have my diagnosis confirmed. It was. And, to my almost-homicidal irritation, she asked me two questions;

“Why didn’t you see someone earlier?” And;

“There is some effective medication for ADHD these days. Would you like me to prescribe some?”

So, at the age of sixty, with life-long ADHD, dyslexia, depression, alcohol problems and loss of social skills, having been a successful medical consultant and a well-known chef and restaurateur, as well as an author and broadcaster, I was now faced with a young and fashionable head-shrinker criticizing my lack of awareness and offering me some Ritalin!

I sometimes wonder, if you are “artistic” in any mode, are you almost bound to have had some kind of mental health issue? In fact, I often wonder if “being a horror writer” could be classed as an issue in itself.

My advice from sixty-three years of unnecessary but rewarding struggle is simple and threefold:

2) See a professional sooner, rather than later.

3) In my personal experience, which is not unique, I have found that writing fiction of any kind is an even more effective way than alcohol, to calm the churning tumult of a disturbed mind and don’t let anyone tell you different! It requires a combination of linear and creative thinking as well as a kind of meditative concentration that excludes distraction.

I am calmer and healthier (both mentally and physically) for it.

Of course, “Why horror?” is a different question altogether. Perhaps we’re all just a bunch of “weirdos”! 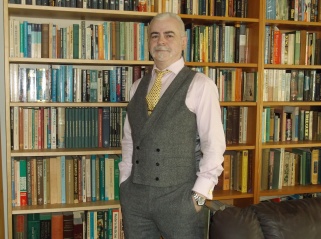 DP Wilson is a Scottish author and broadcaster who has been, at various times in his life, a food bum, a medical consultant, a lecturer, and a well-known chef and restaurateur. He has written for many years, primarily for his own psychiatric self-defence. His short stories have been longlisted as well as shortlisted for the Crowvus Scottish Horror Prize, published in the anthology; “Seasonal Spectres,” and are broadcast regularly on radio. He has also been published in the prestigious; The Horror Zine magazine.

He lives on the mystical Isle of Skye with his wife Ann and son Finn. Send wine.

One thought on “HWA Mental Health Initiative BEING A “WEIRDO” by D.P. Wilson”