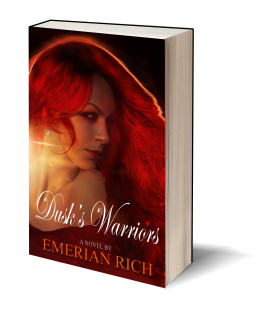 Heaven has opened up and welcomed the vampires of Night’s Knights into a new reality. As they struggle to find their place in their new world, trouble brews on Earth.

Demon servant, Ridge, is causing havoc by gathering up all the souls on Earth that have been touched by immortality. When he injures one of the Night’s Knights crew, he launches a war between the vampires of Heaven, the Big Bad in Hell, and a mortal street gang of vigilante misfits.

Will Julien, Markham, and Reidar be able to defeat the evil that’s returned, or will they once again need Jespa’s help?

“A world of horror with realistic characters in a fast paced thriller you won’t be able to put down.” ~David Watson, The All Night Library

“Emerian brought the Vampire Novel back from the dead.” ~C. E. Dorsett, Shine Like Thunder

Available now at Amazon.com in print and eBook

Emerian Rich is an artist, horror host, and author of the vampire series, Night’s Knights. She is the hostess of the internationally acclaimed podcast, HorrorAddicts.net. Under the name Emmy Z. Madrigal, she writes the musical romance series, Sweet Dreams and she’s the Editorial Director for the Bay Area magazine, SEARCH. She lives in the San Francisco Bay Area with her husband and son.