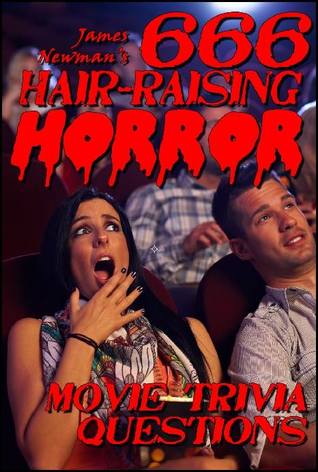 James Newman writes horror novels and lives in North Carolina. For Horror Addicts Guide To Life  he wrote an article called More To Offer Than Blood And Boobs. The article gets into what horror movies you should watch with people who are not into horror films. This is a great article to try to get your horror hating friends to love horror as much as you do.. To read James’s article along with several other articles on living the horror lifestyle, pick up a copy of Horror Addicts Guide To Life. Recently James was nice enough to tell us what he likes about horror:

I’ve loved this stuff since as far back as I can remember. I don’t really know why, but I’ve just always been into it. Growing up, I always had a book in my hand with monsters on the cover. My parents are to blame, I guess, as they got me into it at a very early age — I’ve told the story so many times about my dad taking me to see THE INCREDIBLE MELTING MAN, I’m sure my readers are sick of hearing about it by now.
It’s weird, though . . . looking back, I do recall that they were more worried about me glimpsing a naked breast in a movie than someone getting ripped apart. It’s that old Southern Baptist upbringing, I suppose. I can very vividly recall being told to cover my eyes during Johnny and Sarah’s long-overdue sex scene in THE DEAD ZONE, but Mom and Dad were perfectly OK with me seeing poor Johnny get ripped apart by bullets during his attempt on Stillson’s life. I saw RETURN OF THE LIVING DEAD with my parents and two of their friends during its theatrical release (which was awesome, by the way; RETURN is my favorite zombie film to this day), and while they didn’t have a problem at all with zombies chowing down on brains I was again told to look away the moment Trash began her famous graveyard strip-tease.
So odd. But I was just happy they let me watch that stuff, when I was barely old enough to know what it was I was (supposed to be) shielding my eyes from.

Got a while? As if you couldn’t tell, I love talking about this stuff. You don’t write a book called 666 HAIR-RAISING HORROR MOVIE TRIVIA QUESTIONS without having a pretty good idea what you’re talking about. 😉
Favorite films: The original TEXAS CHAINSAW MASSACRE, Carpenter’s THE THING, Cronenberg’s THE FLY, THE EXORCIST and THE EXORCIST III: LEGION, INVASION OF THE BODY SNATCHERS 1978, RETURN OF THE LIVING DEAD (as I mentioned earlier), the original PSYCHO, ROSEMARY’S BABY, SE7EN, LET THE RIGHT ONE IN, THE MIST, INSIDE, AUDITION, UZUMAKI, BUBBA HO-TEP, and THE LOVED ONES.
Books: LIGHTNING by Dean Koontz, BOY’S LIFE by Robert McCammon, CAGE OF NIGHT by Ed Gorman, THE GIRL NEXT DOOR by Jack Ketchum, just about any collection by Joe Lansdale, THE SHINING and CHRISTINE by Stephen King, FEAR by Ronald Kelly, THE CHILDREN’S HOUR by Douglas Clegg, UNIVERSITY and THE STORE by Bentley Little, and SHARP OBJECTS by Gillian Flynn. I also enjoy the occasional horror comic. Oh, yeah . . . and speaking of comics, I’m a huge Batman nerd too.
TV shows: Believe it or not, there have been very few horror shows on the small screen — at least modern ones — that have won me over. DEXTER was pretty cool, although I didn’t love it as much toward the end as I did early on. I love to watch FACE-OFF with the family. I’m a big fan of dark dramas with a streak of twisted humor . . . stuff like SIX FEET UNDER and BREAKING BAD. So far I’m really impressed with this new DAREDEVIL series on Netflix, but I’ve only watched three or four of those, so we’ll see . . . .

I tend to wear horror T-shirts a lot. A few favorites in my collection: the “hand-with-eyes” cover of Stephen King’s NIGHT SHIFT, a shirt with Cemetery Dance Publications’ (one of my publishers) logo on it, and assorted PHANTASM, THE FLY, and DONNIE DARKO shirts (love that creepy rabbit!).
Oh, yeah . . . and just this week I attached to the front of my new Jeep a license plate featuring the iconic image of Frankenstein’s Monster and the Bride meeting for the first time.

A few short stories here and there, some movie reviews, and I’m hard at work on a new novella tentatively titled ODD MAN OUT (which might be the most intense horror story I’ve ever written, so much that I’ve found some of it very difficult to write because of the terrible things that are happening to characters I love). I’ve also started a follow-up to my “white-trash noir” novel UGLY AS SIN, called UGLY TO THE BONE.

My official website is www.james-newman.com I also love to chat with readers one-on-one via my Facebook page. It’s really easy to find me on there. I’d invite anyone who’s interested in checking out my work to go to my website. There’s a tab at the top of the page that says “BUY MY BOOKS”, where you’ll find links to every edition of every book I’ve written. I’ve supplied links to reputable booksellers where collectors can find even the editions that are currently Out of Print.