I recently read two books that take a very different look at what vampires are like. There are a lot of vampire books and movies out there and each one has a different idea on what vampires should be like. The fact that you can have so many different takes on these mythical creatures is probably why people never get tired of them. We’ve had stories about vampires dating back to 1819 and vampires are just as popular today as they were in the 1800’s.

The first book I want to take a look at is from Nancy Collins who has written quite a few vampire novels including the Vamps series of novels and the Sonja Blue series. The book that I’m talking about here is the fourth book in the Sonja Blue series called  A Dozen Black Roses. This book was originally released in 1996, the version that I read was a revised edition published by Biting Dog Press last year.

A Dozen Black Roses takes place in part of a large U.S. city called Deadtown. The citizens of Deadtown are made up of drug addicts, alcoholics, gang members and vampires. There are two vampires that are fighting for control of Deadtown. One is Lord Esher who was good friends with a certain horror author from the 1800’s. The other is Lord Sinjon who founded Deadtown and is a much older vampire then Esher.

Everyone in Deadtown lives in fear of Esher and Sinjon but things change when Living vampire and monster hunter Sonja Blue comes to town to put an end to both vampires. Sonja soon discovers that destroying the vampires may not be as easy as she thinks when she meets a boy named Ryan whose mother is being brainwashed into marrying Lord Esher. Sonja promises to save Ryan’s mother but Esher practices black magic and has power that may be to much for Sonja to handle.

A Dozen Black Roses is a bloody good time. There are some great characters in this book, including an alcoholic priest with a troubled past and an aging hippie that doesn’t take crap from anyone. I really enjoyed the backstory on Esher and Sinjon. Both vampires even when they were human only cared about having power over others but their personalities are very different.  Also the way they gained their power is  different as well as how they conduct themselves. Esher has plans on expanding outside of Deadtown and through black magic has a more loyal following then Sinjon. Sinjon on the other hand is satisfied being the drug lord over Deadtown and still dresses and acts as he did in the 1700’s. Nancy Collin’s vampires have very unique peronalities but all have the same motivations which to me makes them more interesting.

My favorite part of the book was how Eddie and Sonja became surrogate parents for Ryan.  These two characters don’t have any experience with children but when Eddie finds Ryan eating out of a dumpster he does what he feels he has to do by taking Ryan in. Sonja on the other hand makes the promise to get Ryan’s mother back and shows a different side to herself when Ryan shows his feelings for her.

I also enjoyed the action scenes in this book. One scene I didn’t see coming was when the townspeople have decided they’ve had enough of hiding in fear and go through “changes” as they decide to rid Deadtown of  lowlifes. Another good one was when two gang members are forced to fight to the death naked, while suspended in a cage above an audience of bloodthirsty vampires. This scene will hurt to read if you are a guy. I also liked the suspense that buils towards the end as Sonja prepares to take on Esher.  A Dozen Black Roses is definitly worth your time. 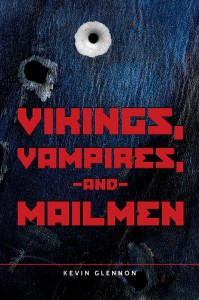 In A Dozen Black Roses the vampires are after power. This is quite a bit different from the vampires in Vikings, Vampires and Mailmen by  Kevin Glennon. In Kevin’s book the vampires just want to eat humans, not just suck their blood, no thats to easy, these vampires want to eat you.

Vampires, Vikings and Mailmen is about the few brave men that make up the United States Vampire Service, a secret government contractor that is dedicated to exterminating vampires. The USVS is busy trying to stop a vampire outbreak in Alabama when they discover a strange hidden chamber that is drawing vampires to the south like a magnet. Can the five man team stop the horde of vampires that are moving into Alabama? It’s going to take a lot of firepower to stop them, but this crew has the weapons and the knowledge to kick some vampire butt.

This book has a lot of action in it but my favorite part was actually a non action scene. There’s a point where the  feds that fund the USVS is giving their theories on how they think vampires came to America. The people in the USVS laugh at them and tell them they’re wrong. Once they get away from the feds they complain that the feds have just figured out what the USVS already knows and now the feds are going to take credit for it. This to me represented the us/them attitude between management and workers which exsists on all jobs. I thought it was funny to see that it exsists with government funded vampire killers as well.

Another item I liked was how the book tells where the vampires came from and the history of the people whose job it is to stop them. I also liked how the USVS work together as a team in classifying vampires and on their battle plan to fight them. A lot of detail is given on vampire fighting procedures and I think people that have a military background will appreciate how the weapons and vehicles they use are described. The only thing I would like more information on, was how the secret chamber that attracts the vampires works.

Vampires, Vikings and Mailmen is more of a military action type novel then a horror novel but I think this book is still something that horror fans will enjoy. I noticed that in a lot of the reviews people say it would make a great action movie, I would definitly have to agree. If you want to read Knightmist’s take on Vampires, Vikings and Mailmen click here. To find out more about the book  go to the official website at usvs.info.