Midnight Syndicate has been a favorite of dark instrumental music fans for over 18 years, and now the Cleveland-based duo of Edward Douglas and Gavin Goszka have wrought their monsterpiece.

Christmas: A Ghostly Gathering revisits those aspects of the Yuletide season familiar to Charles Dickens buffs, specifically the spooky and ooky parts. “A Christmas Overture” by Douglas sets the stage for the Syndicate’s magical ride, and you can practically see Jack Skellington whipping on the horses of his pumpkin carriage as they wind through the streets of a sleeping New England village, spreading the gift of grim.

Next up is a version of Tchaikovsky’s “The Sugar Plum Fairy” from the Nutcracker as one might imagine Italo-horror soundtrack greats Goblin playing it. Goosebumps galore ensue. This is followed by “Carol of the Bells,” composed by Mykola Leontovych, a holiday favorite haunted by choirs of lost angels.

Now we descend into “Night of the Krampus” courtesy of an original composition by Douglas. You’d better not shout, you’d better not cry, although you might want to scream and run for your life if this creature of German folklore, a sort of anti-Claus, spies you being naughty. This tune would make a fine accompaniment to a reboot of the old Hammer Films franchise–big breasted maidens hollering in terror, menaced by the Krampus, who is easily scarier than Frankenstein, Dracula, the Golem and the Wolf Man all stitched together in Peter Cushing’s laboratory.

And just when you think Christmas has become too genuinely frightening to serve as a context for hearthside cheer, “Angels We Have Heard on High” sing gently o’er the plains. But with the suspense built up from the previous songs, you might be wary of something dreadful hidden beneath their wings. Which is probably not “Greensleeves,” beautifully rendered here. Which is definitely “Up on the Housetop,” and whatever that might be, it means no good.

Fortunately, this chilling episode is succeeded by “God Rest Ye Merry Gentlemen,” although with the Danny Elfman treatment given this Christmas standard, they sound more like the League of Distinguished Gentlemen, gathered in a safe house somewhere in Victorian London as they work against time to foil a dastardly plot that threatens Western Civilization. 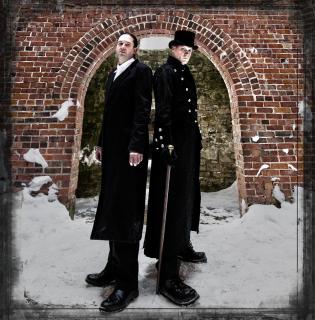 What’s this “Coventry Carol?” A thing to make the hairs on the back of your neck stand to attention. A song that could easily be titled “O Little Town of Deathlehem,” with none the wiser. Whatever is being born this day, it’s probably awful and best avoided for one’s mental health.

Similarly, “Little Helpers,” in another Douglas original, sound like nasty sprites with sharp claws and glowing red eyes, hopping up and down like psychedelic toads with deadly intent. They should be held at arm’s length if you can’t find a steel mesh net and some holy water. Seriously.

Ah, “Sing We Now of Christmas.” Nothing sinister here, right? A sweet, dark and somber rendition of the 15th Century French carol. So far, so not Satan’s coming round the bend. Yet. Suddenly we find ourselves swept into the heart of a “Winter Storm” (a Goszka original this time), and from there “Into the Stillness,” just shy of peaceful, a bit ominous actually…ok, something’s coming to turn the stillness into an abattoir. Could it be “The Parade of the Tin Soldiers?” For sweet little toys, they sound awfully like Stormtroopers from Hell. When, oh when, will it be “Everywhere, Everywhere, Christmas Tonight?”

At last, it’s “Christmas at Midnight.” The chimney has been stoppered up to keep out the Krampus, with pots of boiling oil handy just in case he breaks through the barbed wire and armed guards. The children are shivering in their beds, wracked by nightmares, visions of big black spiders and rotting zombies dancing in their heads. Mom and Dad are with a therapist. And yet, despite all the horror and fear and creeping flesh, it seems we have all survived.

Just in time for the New Year’s Evil.