Start your spooky viewing from the beloved horror author off right at the beginning of the alphabet! 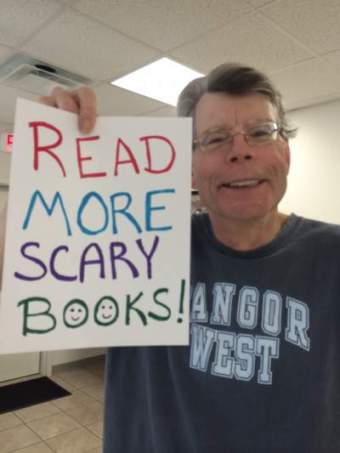 Biography: Stephen King – This 2000 television hour chronicling the best selling horror author details his quiet, poor early life in Maine, the abandonment of his father, awkward school years, and his initial love of reading, making primitive newsletters, and adoring horror movies. Although fans of the man himself probably feel this profile could have been longer – heck, just a full forty-five minutes of talking to King would be delightful – anyone who has delusions of grandeur about being an author can learn something here. Interviews with King, his wife Tabitha, and other family and friends keep the presentation from getting into the entertainment hyperbole style that so many of the more recent Biography episodes unfortunately offer – however some of the New England accents might be amusing or tough to distinguish for broader viewers. Thankfully, the natural, honest conversations and smooth narration focus on King’s efforts as a struggling young writer and family man, and it’s refreshing to see these behind the scenes difficulties discussed so candidly by the man we so often raise as the twisted and macabre industry standard. Newer King readers can have a thoughtful, pensive introduction here along with longtime horror audiences interested in the spooky King craft.

Cat’s Eye – I used to love this 1985 spooky and bizarre Stephen King trilogy as a kid. James Woods

(Once Upon A Time in America, John Carpenter’s Vampires), Drew Barrymore (Never Been Kissed, Charlie’s Angels), Robert Hays (Airplane!) and that cute but pesky cat capture the story and suspense wonderfully. However, some of the effects here are a little too dated, silly, and small scale. What used to be so scary then is now merely ironic and just a little too unintentionally comical. Then again, the troll can still seriously scare the youngins, so if you’re into that, go for it!

Creepshow – Terror titans George A. Romero (Night of the Living Dead) and Stephen King (Carrie) present this 1982 anthology featuring a spooky fun cast including Ted Danson (Cheers), Ed Harris (Apollo 13), Leslie Nielson (The Naked Gun), Adrienne Barbeau (Maude), and Hal Holbrook (The Senator). The expected anthology frame blessedly remains as only opening and closing bookends with a few scary winks, letting the animated transitions, red and blue lighting, and comic book styled backgrounds or cell frame designs accent the scary and carry the pulp homage. While some nods are too obviously placed or too humorous for some, the lighthearted, almost camp and endearing at times tone is in keeping with the creators’ nostalgic Tales from the Crypt creepy of yore feeling. The first “Father’s Day” tale is a little short but has a now dated kitsch and gruesomely bemusing result. “The

Lonesome Death of Jordy Verrill,” however, is kind of dead end. It’s surprising that Stephen King can act as the stupid hick so well, but a vegetation meteor run rampant doesn’t have that much impact – no pun intended. Fortunately, the lengthy “Something to Tide You Over” provides pretty but deadly beachy with vengeful tides and a quality, watery comeuppance. “The Crate” has some obnoxiously fun performances to match its hokey, inexplicable monster, and the final “They’re Creeping Up on You” is surely not for people who dislike bugs, namely cockroaches. Lots of cockroaches – many, many cockroaches everywhere! Certainly this can be uneven in scares and brevity as anthologies often are, but all in all, there’s a good, macabre ride here.

Creepshow 2 – The lengthy animated opening and frame story for this 1987 anthology sequel feels somewhat out of place and dampens the suspense of George Romero’s writing polish on these Stephen King tales, yet the beginning fifties-esque pleasantries of the “Old Chief Wood’nhead” first tale make for a fine down on its luck, eerie western. George Kennedy (Cool Hand Luke) and Dorothy Lamour (Road to Bali) add a delightful charm to this tense blend of Navajo mysticism, hooligans, and quality revenge. While the ending feels a little rushed and the dated backwoods styles might be amusing or annoying to some, the mannequin effects are surprisingly well done. Story Two “The Raft” also offers plenty of dated eighties pot and college motifs with a hint of nudity and stupidity for good measure. People in horror movies never get away when they have the chance! Despite the unexplained killer oil slick and weak globular effects, there’s plenty of suspense here. The final tale “The Hitchhiker” starts with some saucy but leads to crazy, never say die, car chases and pursuits with a touch of humor and an ironic end. Again, the stories and the framing plot don’t exactly tie together, but there’s enough eerie entertainment here to marathon with the original Creepshow.

You Make the Call

Bag of Bones – I want to like this 2011 ghostly family tale for the fine cast, including Pierce Brosnan

(GoldenEye), Annabeth Gish (The X-Files), and Melissa George (Triangle). The performances are enjoyable along with the rural, upstate setting, water scenery, and cool cabins. Some of the obligatory writing aspects are fun, too. However, even having not read the Stephen King source, one can tell this is poorly adapted, borrowed material that confusingly tries to endear whilst also using scary dreams for shockers, confusion, and audience mistrust. Despite the King of Horror pedigree, the slow pace often takes too long to get to the ghostly shenanigans, and though atmospheric, none of it is horrific. This didn’t need to be two parts, and every scene feels like it has its own unnecessary establishing scene before it. Other films have done this same type of paranormal resolution in a taught ninety minutes, and the plot here is surprisingly similar to the 1981Ghost Story adaptation – a Jazz era indiscretion, a familial curse, a female haunting, and an attempt at bodily appeasement. Prophetic connections aren’t fully explained, and too many questions are left unanswered – did he do the final revisions for his book or not? A few spiritual confrontations are downright laughable, too, like ghosts tossing records to deter people back up the stairs. Hit 007, you possessed tree, smack him with your leafy branches! These action missteps become hokey wastes of time in what should be a straightforward town mystery. King references may be fun for some viewers but too on the nose obvious or annoyingly pointless for others. This is entertaining to watch, even bemusing, but it’s also yelling at the TV frustrating thanks to convenient technological uses and contrived clues. All in all, I remember the bad more than the good, and that’s not the best way to do a memorable adaptation.