Recently, HorrorAddicts.net had an opportunity to interview Lacrymosa Aeterna and this is what we found out!

1. HA- Who are all the members? What instrument do they play? Who writes your lyrics?

Lacrymosa Aeterna is a dark classical crossover duet project from Thessaloniki,Greece. George Palousis is the composer and producer and Vamptessa Debbie is the vocalist and lyricist. Occasionally, we also collaborate with Daniela Paleohorinou,who is a talented upcoming poet/writer.

2. What singers or bands inspired you growing up? Who are your favorite artists today?

Debbie: As a teenager, I was mainly inspired by old Tristania, Draconian, Myriads, Epica, Nightwish, Lethian Dreams, Dark Sanctuary, Artesia, Elend, The Sins of thy Beloved, Nox Arcana and Midnight Syndicate.  I used to listen to atmospheric/melodic/symphonic/doom gothic metal & dark neoclassical music at that time. And of course, Disney! I still love Disney movies and I really hope to give my voice to a Disney princess some day. I think it’s about time they made a Gothic romantic princess! 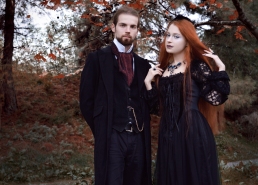 George: In my early years, I was inspired by various metal bands such as Nightwish, Epica, Within Temptation, Tool. Slowly, I turned to film/symphonic music and my favorite artists are: Howard Shore, John Williams, Hans Zimmer, Danny Elfman, Abel Korzeniowski, Yanni  and several classics.3.  When did you first know you wanted to be a musician and how did you start out?

Debbie: At the age of 16, when I took up my first singing lessons, I decided that I wanted to make a living by being a vocalist. My beliefs were and still are that life is short and everyone should follow their heart’s desire by choosing to pursue their careers according to their dreams and what they love doing the most and not by only being dependent on the amount of money they will earn. The first step that I took towards my dreams, was to join a gothic metal band at the age of 17. It was more of a school project and it only lasted about a year.

George:  At the age of 19, I quit university, so that I would have time and energy for music and it was at this age  I started composing and producing my own music. I began learning to play the piano by myself and I slowly discovered the whole symphonic orchestra and the music production.4. What non-musical things inspire your music? Is there a place where you go to be inspired?

Debbie: My inspiration lies in anything magical-derived from fairy tales. Also, I get motivated by dreams I had, favorite movie scenes, soundtracks, paranormal romance literature, life experiences and silence… I find great inspiration in dead silence, that’s when my imagination runs wild. I love taking long walks in the woods during twilight hours and when there’s a full moon. The atmosphere is so eerie and darkly enchanting during these times,that my mind always drifts away and I feel like the figments of my imagination can become real.

George: Anything could inspire me. There isn’t anything in particular worth mentioning,except long walks in nature,which are utterly rejuvenating and inspiring.

5. What’s been the greatest achievement of your band? Or, where was the coolest place to play? Where did you enjoy yourselves the most?

We feel that our greatest achievement so far is that we got discovered by a movie producer based in Hollywood a year ago and we had the privilege of writing the whole score of the Gothic Horror film “Pale Horse” which will be released soon this year or next. It should be noted that this work is unrelated to our Lacrymosa Aeterna music. We worked on this score as individual artists.

6.What are your favorite horror movies?

George & Debbie: Our list is huge since this is one of our favorite genres,so we’re gonna name the first ones  that come to mind right now. Insidious movies, The Ring movies, Mama, The Conjuring I,II , The Orphanage ,Silent Hill I, Haunter, Whispering Corridors 3:Wishing Stairs, Whispering Corridors 4: Voice, Cello, The Uninvited, Mirrors I, Dead Silence, Case 39, The Dark and the list goes on…!

7. What was the scariest night of your life?

We really can’t recall any night that would be described as a scary one. Maybe it’s because we love the night!

8. What is available now that the listeners can download or buy? What is the website they can find it on? What is the best social media site for listeners to connect with you on? Twitter? Facebook? Instagram? Other? Bandcamp? What are your web addresses?

We have released an EP called “Fables”, which contains all of our 5 songs,not including our yet unreleased 6th installment “Shrine of Eternal Elegy”. It can be purchased directly from us by sending a personal message to our facebook page or sending an email to: lacrymosaaeterna@hotmail.com or by contacting us through our website: http://lacrymosaaeterna.wixsite.com/lacrymosaaeterna

You can also find our songs  on Bandcamp,Soundcloud , and our YouTube channel.9. If you could play anywhere in the world, where would it be and who would be your opening band?

We would love to perform live in a large venue in Prague. We admire everything about this city and we’d really like to share the stage with  our talented dear friend, Destini Beard.

10. What are you working on now for a future release? Are you on tour? Where can they see you?

We are currently working on the video clip that will accompany  our song “Shrine of Eternal Elegy” and they will both be released hopefully by the end of fall 2016. We are also working on a new song that will feature Destini Beard’s vocals. For the time being, we don’t do live performances.