The 2011 feature Letters from the Big Man is the most bemusing Bigfoot film I have ever watched. At times more meditation than movie, it’s like a love letter featuring an enigmatic Sasquatch and a woman ready to surrender to nature.

Directed by Christopher Munch, Letters from the Big Man feels like a passion project. After viewing it on Amazon Prime Video, I still don’t know what to think of it. But it did make me think. I checked the critically acclaimed film’s rating on the review site Rotten Tomatoes, and the audience score of 52% confirmed my suspicions. It’s not an easy movie to categorize. Film critic Roger Ebert wrote at the time, “‘Letters from the Big Man’ will mystify some, please others with its serenity, and be unlike any Bigfoot movie you have ever imagined.” That sums up the reaction I had.

Darrin Jones, a talented blacksmith in Alabama, recommended the film to me. Darrin and his wife create and sell custom merchandise, including items stamped with the Bigfoot logo. I purchased a Bigfoot keyring and four Bigfoot coasters from them at a gun show last year. Their business is located on Facebook under “Jones Knives and Leatherworks.”

Letters from the Big Man revolves around a Forest Service employee named Sarah Smith played by an excellent Lily Rabe. In the aftermath of a recently ended relationship, Sarah copes by accepting a solo job to study rainwater run-off in a remote forest impacted by fires.

What follows is a slow burn tale as Sarah enjoys the isolation of nature while Bigfoot watches her from a distance. Sarah meets an environmental activist to break up her solitude. There’s a subplot involving a secret government plan to build an intelligence center to study Bigfoot for military reasons. Apparently, the CIA thinks the Big Man employs extrasensory abilities ripe for exploiting.

However, the focus of the film is more on feelings than plot, although it’s difficult to discern what Bigfoot feels. Sadness mixed with hopefulness, maybe? Sarah’s feelings are profoundly affected by her time in nature. She draws artwork of Bigfoot from her dreams, and she desires to live with the creatures in the same way Dian Fossey immersed herself with the gorillas.

Yes, Letters from the Big Man is a strangely serene film, but as a Bigfoot enthusiast, I enjoyed it. The makeup department’s dignified interpretation of Bigfoot and the subtle acting of Isaac C. Singleton Jr. reinforced my ideal version of Sasquatch as a patient and peaceful creature struggling to make sense of humanity’s self-destructive behavior.

At one point, a character says of Bigfoot, “It’s all about the heart with them.” Perhaps that’s the message of the movie. Maybe the filmmaker hopes Bigfoot can say the same about humanity one day.

NEXT UP: Chapter Thirty-Nine: Man vs. Bigfoot. I review the 2021 film directed by David D. Ford.

THE BIGFOOT FILES | Chapter Eighteen: The Man Who Killed Hitler and Then the Bigfoot

THE BIGFOOT FILES | Chapter Sixteen: Something in the Woods

Exists is the purest Bigfoot film I’ve ever watched. By purest, I mean if you looked up “Bigfoot movie” in the dictionary, a picture of this film’s poster should be there. Released in 2014, Exists is directed by Eduardo Sánchez, one-half of the duo who directed and wrote the groundbreaking 1999 found-footage horror film The Blair Witch Project.

Available free with ads on tubitv.com, Exists is basically a more action-packed Blair Witch-style creature feature as the plot follows five friends into the remote East Texas woods for a weekend camping getaway at a neglected hunting cabin. One of the campers, Brian, is the fifth wheel of the group, but he brings along a lot of video equipment to document the adventure.

The film opens with these foreboding words: “Since 1967, there have been over 3,000 Bigfoot encounters in the U.S. alone. Experts agree the creatures are only violent if provoked.”

Exists effectively uses almost all the Bigfoot clichés, including discovery of the hair and the footprint, the eerie vocalizations, and rock-throwing. The Sasquatch itself is one of the best to grace the big screen thanks to the costume design of Charlotte Harrigan and the creature acting of Brian Steele.

The movie starts fast when the group of friends hits something in the road with their SUV. Brian’s video camera catches a mysterious image of “something” walking in front of their vehicle. However, they never find whatever it is they hit.

Once at the cabin, the group spends the first day at a nearby watering hole. While Brian surreptitiously videos one of the couples making out, he hears a noise and sees something moving in the woods. During his search for the creature, Brian reveals that years ago his uncle (who owns the cabin) “saw something out here that freaked him out. Bad enough that he never came back to his beloved hunting cabin.”

What follows that night is a close encounter of the Bigfoot kind as the group is terrorized and left stranded in the woods by a raging Sasquatch. The next morning, Brian’s brother Matt hops on his mountain bike and heads for the highway to look for help and hopefully find cellphone reception.

The second attack on the cabin spooks the remaining four in the group enough to take a shortcut through the woods to try and reach the safety of the highway. The final half-hour is an intensely desperate trek through Bigfoot territory with an emotionally satisfying climax.

For the most part, movie critics and audiences did not like Exists when released in 2014. According to movie review website Rotten Tomatoes, only 33 percent of critics offered positive reviews of the film, but what surprised me was the audience score of 29 percent.

Yes, the human characters are paper-thin, and the plot is bare-bones basic, but the Bigfoot attacks are exceptionally staged and realistic. I think 15 years after The Blair Witch Project’s release that maybe audiences were tired of shaky-camera, found-footage films, especially in the era of slick comic-book, super-hero movies.

Whatever the case, I’m glad the movie “exists” for Bigfoot enthusiasts like me.

NEXT UP: Chapter Thirty-Five: The Darkness in the Pines. I review the 2021 novella by Harlan Graves.

Primal Rage is a B movie creature feature with an interesting take on the Bigfoot myth streaming free on Tubi. Released in 2018 by Blue Fox Entertainment, the horror film is directed by Patrick Magee who boasts an extensive background in special makeup effects. Magee’s talent is on display here as Primal Rage presents one of the most wickedly cool Bigfoots to hit the screen. 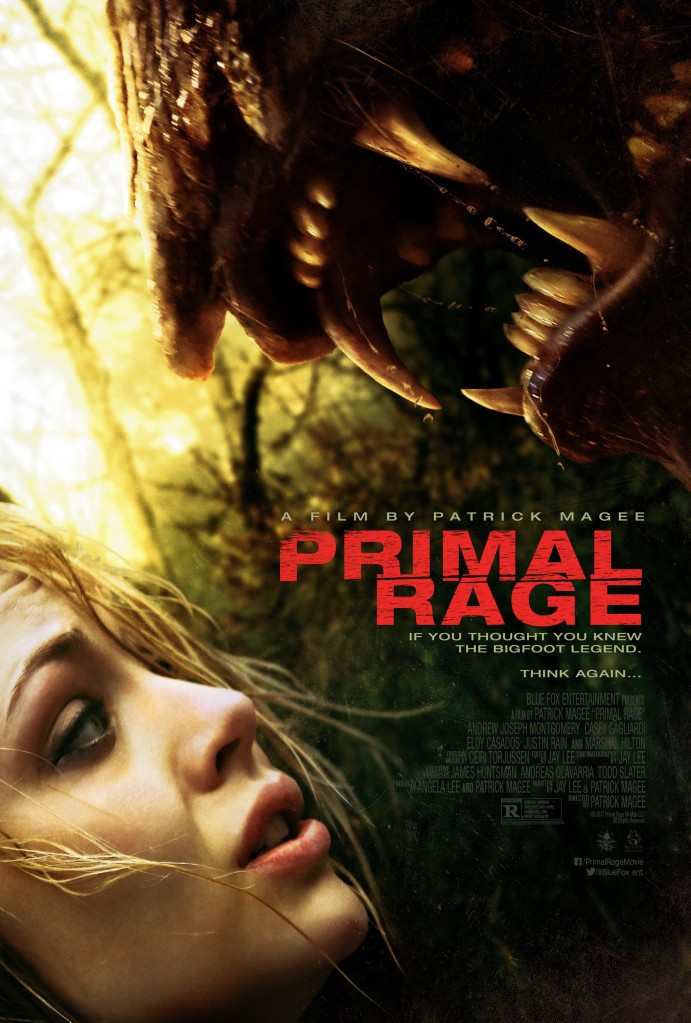 Reminiscent of the alien in the 1987 movie Predator, Magee’s Bigfoot is a warrior who wears bark armor, swings axes like Jason Voorhees, and uses a bow and arrow with deadly accuracy.

The storyline is basic. A married couple, Max and Ashley Carr face danger after a freak accident strands them in the forest. A former substance abuser, Max is fresh out of prison, and the film opens with Ashley picking him up. During their drive through the Pacific Northwest, the couple reveals the tension between them and the fact they have a child together.

Once lost in the woods, Max and Ashley encounter a group of local yokel hunters packing rifles and rape vibes for Ashley. However, Bigfoot is stalking the couple and is preparing to launch an attack on the humans.

About halfway through the one-hour and 45-minute film, the killings start in full force as Bigfoot’s arrows puncture throats and his axes decapitate heads. The practical special effects are top-notch.

Like the hunters, Bigfoot is focused on Ashley, and he snatches her up during his rampage and carries her to his cave. Meanwhile, a sheriff (played by the late Eloy Casados) is on the case, tapping into Native American myths about the Oh-Mah legend to develop a plan to rescue Ashley.

An act of redemption packs a bit of an emotional punch during the climax, but the fun of Primal Rage is watching Bigfoot fearlessly bound around the woods and wreak havoc. As a fan of Sasquatch and low-budget creature features, I enjoyed Primal Rage and applaud the director’s effort to try a new twist on an old legend.

NEXT UP: Chapter Thirty: Bigfoot Horror Stories. I review the 2021 book by Steven Armstrong.

The Bigfoot movie Something in the Woods is a low-budget, independent film produced by GodZone Ministry and Saving Oscar Productions. The movie is available on Amazon Prime with a respectable rating of 3.5 stars out of 5.

Based on true events, the 2015 film chronicles a blue-collar family’s encounters with Bigfoot in the 1960s. Starring David D. Ford (who also directed with Tony Gibson), Something in the Woods is old-fashioned filmmaking with a deliberate pace and no-nonsense style. None of the characters are flashy, but they are relatable. Ford plays John Hartman, a God-fearing husband and father of two sons, who faces an unknown threat to his family. 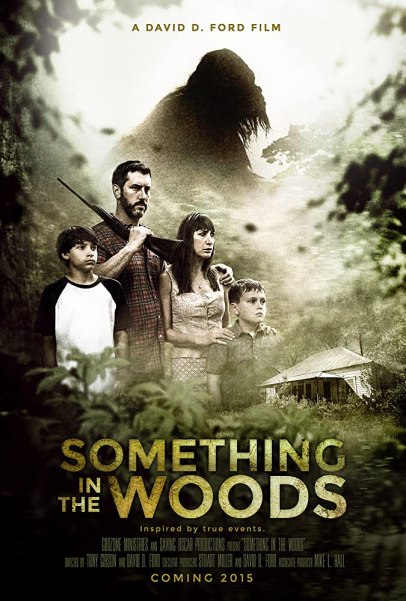 Something in the Woods foregoes any hint of mystery near the beginning and totally embraces the Bigfoot plot. For much of its runtime, the movie focuses more on the family’s fears and reactions to the threat rather than the Bigfoot itself. Still, it is a creature feature and delivers all the typical Bigfoot signs: strange hair caught in a barbed-wire fence, nasty odors, vocalizations, missing farm animals, and the footprints.

The Bigfoot in the film looks like a classic Bigfoot, and its motivations are unclear. John’s motivations are clear. He’s concerned about Bigfoot hurting his family and resolves to hunt and kill it.

The scenes I enjoyed most in the film all involved Bigfoot and all of them escalated the eeriness and suspense. In one scene, John is looking for Bigfoot in the woods with his oldest son. When he realizes Bigfoot is stalking them, John tells his son to run home. Then, Bigfoot runs toward the boy. Intense.

My favorite scene involves the youngest son and an unseen Bigfoot outside his bedroom window. It illustrates the contrast between how the innocence of youth reacts to Bigfoot versus the more aggressive response of adults.

Something in the Woods adds an interesting twist during the climax but earns the moment with its consistent, practical storytelling. I enjoyed the movie and recommend it to Bigfoot enthusiasts interested in a story based on real encounters.

NEXT UP: Chapter Seventeen: Bigfoot Trail. I review the 2019 novel by Eric S. Brown.