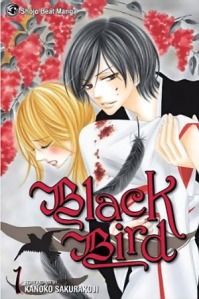 Black Bird by Kanoko Sakurakoji is the story of a young girl named Maiso who is tortured by demons from a very young age. When she was little, a neighborhood boy protected her, but when he moved away, the demons had free reign. Now, she’s sixteen and the demon attacks have increased. Just when the demon attacks are at their worst, the little boy moves back, only now he is a gorgeous man.
Tall, dark, and handsome, Kyo, is her knight in shining armor. What’s more, when he’s around, the demons don’t bother her. It seems like a dream come true, until he tells her he is the head of a demon clan and plans to make her his wife.

Unbeknownst to her, Maiso is the Bride of Prophecy. Kyo tells her that all demons search their lives for her and are after her for one of three reasons:

1. To drink her blood and be granted long life.

2. To devour her, which ensures eternal youth.

3. Or to bed her and make her their bride, which makes thier entire clan prosper.

There is a touch of fetish eroticism as Kyo can lick Maiso’s wounds to heal her. He poses as her teacher, so there are several scenes where she has fallen and he “tends” to her wounds by bringing her into the classroom and licking her under her plaid, schoolgirl skirt.

The series is a tale of courtship, demon attacks, and innuendo. You might ask where the title Black Bird comes from? When Kyo is in his demon form, his hair grows long and straight, he has black wings, and wears a mask that looks like a crow’s beak. At no time does he exhibit the “ugliness” of the other sorts of demons that attack Maiso daily. It was interesting to me that there seemed to be “classes” of demons. The kind that constantly flew around her are almost like spirits. They are transparent, can be tiny or huge, and usually bite at her neck or ankles. The other sort (like Kyo) look mostly like humans and are normally beautiful. When they change into their demon forms, they look more like dark angels rather than the scary, ugly, demons we’ve come to expect from Buffy the Vampire Slayer.

Horror Addicts might find the constant girly blushing of Maiso tiresome, but for those of you who enjoy a little innocent romance in your horror, you’ll love this. Sure, there are demon attacks, clan wars, and some sexy makeout sessions, but for the most part, this is a story about a young girl dealing with her ailment (demon attraction) and the fact that her boyfriend is a powerful demon.

The artwork in this manga is beautifully done and reminds me more of the Bride of the Water God in some places. It has a very traditional side, with men wearing long warrior robes and long hair tied in back, but it also shows these same males in modern street clothes.

Later in the series, Maiso grapples with the decision to become Kyo’s bride and sleep with him, even though it may cause her death. There is big drama in whether they should sleep together or not, and when they finally do, if they should do it again and if she gets pregnant will she die. In fact, every time she experiences a pleasurable event with Kyo, the next thing you know, her life is in danger. It begs the question, is the Bride of Prophecy ever allowed to be happy?

Although this manga series is more romance than horror, I still enjoyed it immensely and thought it might appeal to those of you with more classic macabre tastes.