Life wasn’t easy for Chaz. He died too young in a construction accident only to be brought back to life by the government as the world’s first smart zombie. The government decided that the experiment was a bad idea and destroyed the lab and tried to exterminate Chaz. Chaz escaped though and accidentally started the zombie apocalypse in New York City. Chaz didn’t ask for this to happen and he’s not sure how to stop it but Manhattan belongs to the zombies now.

Being a smart zombie has its advantages, the other zombies are now looking at Chaz as a leader and he may be the one to lead the zombies to a new way of life. Also a second smart zombie named Dolores has found Chaz and together the two will lead the zombies into battle against the humans in the Hunger Wars. Can two zombies in love lead a revolution and find a cure for death? How I started The Apocalypse Book 2: The Hunger Wars has your answers.

I loved how this book manages to include action, comedy and horror in the same story. The story starts with a bang as Chaz’s son Peter is running the city streets trying to get supplies for his father, while dodging zombies and trying to escape gun happy humans.The book goes along at a pretty brisk pace with the battle for New York and Dolores’s adventures going from Portland to New York.

What I liked most about the book was the humor in it. Like when Dolores and Chaz are sharing a bowl of toes and Chaz remarks that they are out of finger food. I also liked Dolores leading zombies into a bedroom to help some humans escape and commenting to the zombies: “Come and get it, yummy, yummy in your tummy.” Also just hearing Chaz trying to rally the zombies for their battle against humanity was funny and a little scary at the same time.

There are also some great moments of horror in this book such as towards the end when a boy spots a zombie in his yard after loosing his mother to one. This book also has a zombie sex scene that will be painful if you’re a guy. In the scene I loved how the guy realizes that even in his current state he is not immortal and while he is falling apart, he’s still not sure he likes the idea of death.

All in all I enjoyed this book with some minor exceptions. There was a couple of points where the dialog wasn’t very good. The scenes with Breck Palmer and Chaz’s son seemed unnecessary but I think that was meant to start a future storyline.  Also in the middle of the book the story changes directions as Chaz and Dolores try to rescue some humans. At this point I found myself feeling disappointed, I liked where the story was going but towards the end I did like where the author went with it.

During the last few pages of the book I found myself thinking it would look great to see this on a movie screen and it set up a third book in the series. I’m hoping the character of Lumpy gets a bigger role in the next book. How I started The Apocalypse Book 2: The Hunger Wars is a fun book with a lot of heart and I think zombie fiction fans will really love it. 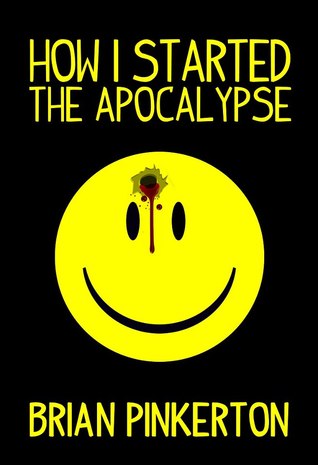 Chaz Singelton woke up from the longest sleep he ever had in what looked like a hospital room and he had no idea how he got there. His body felt numb and he had the worst headache ever, but that was the least of his problems. Chaz is the world’s first smart zombie and he is part of a government experiment to create an army of super soldiers who can’t be killed.

This is the story behind Brian Pinkerton’s How I Started The Apocalypse. Chaz is trapped in a secret underground lab, he wants to escape to see his family again but there is no way out, until the government decides to shut down the experiment by killing all the zombies along with the workers in the lab.  With the need to eat human flesh and the power to destroy mankind, Chaz escapes and goes on the run to find his wife and son.

How I Started The Apocalypse is an action packed zombie thriller from the point of view of the zombie. Chaz is a multi dimensional character that you can’t help but like. Chaz never wanted to be a zombie and he tries to fight his zombie nature, he just wants his life back, but he soon realizes that his wife has moved on and he can’t fight what he is.

To make matters worse he is being stalked by Breck Palmer, the man in charge of the super soldier experiment and the one who destroyed the secret lab.  My favorite part of this book was how there was a point where you feel sorry for Chaz and his hopeless situation and you hate Breck for what he has done.  As the story progresses and Chaz has more trouble controlling himself,  he starts to become the villan while  Breck becomes the sympathetic character and the only one that can put a stop to the zombie pandemic.

I did have some issues with How I Started The Zombie Apocalypse, some of the dialoge in places seemed a little cheesey and didn’t fit certain situations. Also there was a scene where Chaz finds his wife that I didn’t care for. Without giving any of the story away I felt that what happened with their relationship was too far fetched. Though the last scene with Chaz’s wife was hilarious and left a smile on my face. Another scene I had issues with was when Chaz tries to end his zombie problem. I felt he should have known it wouldn’t work but his attempts at doing it were very funny.

How I Started The Apocalypse is an original take on the zombie genre. The book is  fast paced with a lot of humor and gore thrown in for good measure.  There are a lot of great action scenes here, and a commentary about how humans act like zombies. I liked Chaz’s escape from the secret lab and there was a scene in Yankee Stadium that was very good. One of my favorite scenes is when Chaz makes a childhood bully suffer giving him his just desserts. There was also a scene towards the end with a goth girl who wants  to turn him into be a celebrity that was very good.  Best of all I liked the way the story ended. The storyline gets wrapped up but it hints at a sequel and I would love to see where Brian Pinkerton goes next with this idea.