Brimstone a Disturbing yet Must See Parable

I want to write an entire opus on the 2017 European co-production Brimstone, starring Guy Pearce as a hellbent minister and Dakota Fanning as Liz, the mute midwife afraid of him. The layered statements from writer and director Martin Koolhoven (Schnitzel Paradise) are heavy handed and uncomfortable – many may find Brimstone at best over long at two and a half hours plus and at worst, the picture will be trigger inducing to sensitive audiences. However, with those caveats said, I don’t really want to summarize much else nor especially spoil this western thriller, as it is best to go into this must see genre bending parable cold.

The bleak narration and biblically steeped onscreen chapter titles hit home the seasoned frontier, rough childbirth, and rustic farms. The white church and cross atop the steeple stand out as a sense of order amid the natural wilds, and sermons warn of false prophets, wolves among the sheep, and hellish retributions worse than one can imagine for those who stray into lawlessness. Breach births mean choosing between the mother or the child, creating an ostracizing, easy to manipulate divide. Is such a delivery up to God or the midwife’s fault? Whispers of evil doing can quickly sway a community to fear and violence. Fiery calls for retribution and paying for one’s sins add to the fear and grief of an unbaptized stillborn not finding salvation. Reverse persecution is disguised as divine, and the wolf in sheep’s clothing is almost the devil himself indeed. Why be afraid of a reverend and not welcome him into your home? The foul afoot need not be said, and Brimstone doesn’t underestimate the audience, letting the drama play out with gruesome animal paybacks, abductions, and torturous injuries. The simmering suspiciousness allows the audience a sense of stillness, time to focus on the characters while the iconography builds suspense. The man in black before the burning building or dragging a girl in white through the mud and calling her unclean are allowed to speak for themselves. Brimstone uses a western setting of creepy brothels, servitude, and no justice for working women to tell a medieval morality play – an already damned purgatory epic a la Justine’s virtues made vice with shootouts, dead horses, and all the abuses we can infer. Brimstone’s pursuits may be taking place in an abstract limbo, beyond time and space with different girls who are one and the same, perpetually chased by the same terror with precious few other devil or angel on the shoulder characters. The out of order segments change the settings as they advance the tale, behaving more like acts themselves where the audience is at first unsure if this is what happened before or what comes next. Brimstone keeps viewers interested enough to see how the vignettes tie together; we trust the unique constructs are part of the juxtaposition highlighting how the code of the brothel and the rules of the fanatical minister aren’t very different and both inescapable can even be one and the same. Obey the nastiness of the patriarchal for body and soul or you are guilty and will be punished. Whatever the origin of her sinful behavior, a girl should be ashamed – it’s her fault that menstruation makes her Little Red Riding Hood fair game. Once there is blood there is no innocence, and the vicious cycle continues with twisted irony, fateful orchestrations, and sins that cannot be out run. We’d like to think this was just how it was ye olde back then, but not much has changed has it? 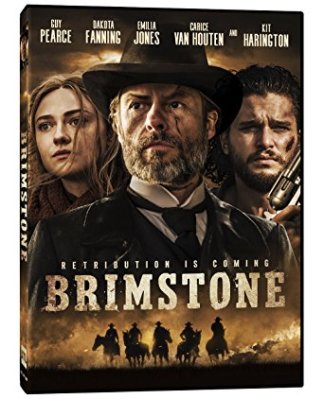 Many actors today simply would not take such a role, but Guy Pearce puts on an incredible presentation in Brimstone as this extremely unlikable manipulator. Our foreboding minister justifies his grooming righteousness with warped scripture, remaining nameless beyond his title or fatherly names – respected monikers advantageously misused along with creepy chapter and verse and touchy feely, uncomfortable familiarity. He knows when Liz is hiding near him and taunts her on how she as such a terrible murderess can sleep at night. This minister has come to punish her and will use her husband and daughter to do it. He immediately expresses a shuddering attachment to her little girl, and after initially claiming his actions are of God, this minister festers into an unstoppable, almost immortal embodiment of the sins made flesh carrying him. Hellbent and beyond salvation, this Big Bad Wolf howls and embraces his brutal scourge. I’m not often disappointed in Pearce’s work despite learning early on thanks to superior quality like The Adventures of Priscilla Queen of the Desert, L.A. Confidential, and Memento (For shame on those who discovered Memento and Christopher Nolan so late, and why is Snowy River: The McGregor Saga still not properly available in the U.S.?) However, this may be his darkest, finest performance, and it’s surprising no awards followed. Likewise, Dakota Fanning (The Secret Life of Bees) looks the pioneer part. She’s kind in an unforgiving landscape, mute and disliking guns, but strong and we immediately root for her survival at every struggle, be it a neighbor’s cold shoulder or a freezing last stand. There’s never a doubt that she’s in the right, doing what she has to do – her lack of a heard voice lets her actions speak louder than words. Emilia Jones (Utopia) as the younger Joanna is also a spirited girl who learns of her own strengths the hard way. Despite all the abuse and persecution in Brimstone, these ladies are not victims. The Minister believes a woman can’t out run what a man has in mind for her and she will pay the price for her resistance, but Joanna flees to the frontier for her freedom. She continues to outrun evil in all its disguises whether it is a losing battle or not, and Liz repeatedly take matters into her own hands, refusing to surrender regardless of all that’s taken from her.

The ensemble behind the leads in Brimstone really is a supporting cast helping or hindering, well-intentioned or misused, stepping stones and catalysts. Carice van Houten’s sorrowful mother and helpless wife Anna is completely relatable. The audience wants to protect her from her husband or see her stand up and do something for Joanna, but her weakling mother who can’t do anything contrasts the strong woman alone daughter we see later. This minister’s wife won’t do her wifely duty, thus she needs to be gagged in an iron mask for not holding her tongue and whipped until she can gain the Lord’s favor. Hers is a pathetic existence, and this bittersweet role is the complete opposite of Van Houten’s Game of Thrones ruthless. Fellow Thrones star Kit Harrington is also featured in Brimstone for Chapter Three – perhaps mostly for the financing incentives and audience appeal after several casting changes – for his accent is terrible and he looks a little too pretty boy modern rather than a gritty cowboy. Although we don’t doubt his anti-hero outlaw’s earnest or sincerity toward Joanna, his masculine intrusion is the first of many would be hopeful sparks used against her. Fortunately, Carla Juri (Wetlands, but more importantly, the gal plays ice hockey!) is a fun and feisty prostitute when it comes to the disagreeable male clientele. She’s tender with Joanna, and they plan to leave together as mail order brides after one too many pimp abuses. Viewers hope for their escape from the cathouse – even if we know better. The leaning toward lez be friends because of male hatred innuendo and sacrificial BFF turns may be slightly cliché, but the ladies are likable and charming with turn about twists right up to the end.

Brimstone is visually aware of its bleak tale, contrasting the gunfire, outhouses, hangings, and blood on snow with birds chirping, hymns, and the sunshine. Fine cinematography accents the international locations with overhead angles and camera work that knows when to move but also how to be still and let the action happen. The sign language, costuming, horses, and wagons add authenticity, and the color schemes don’t feel digital or over saturated. The natural outdoor palette and interior patinas reflect the chapters being told – a rustic harvest autumn, the hot summer and barren saloons, the budding fertile spring of a New World congregation, and a frigid, snowy twilight with cleansing water bookends. Ironically, Brimstone was shot in relatively chronological order with Three first, then Two, and later chapters One and Four, and the impressive looking blu-ray release includes lengthy behind the scenes interviews and detailed sit downs with numerous cast and crew members. Brimstone is recognizable as a western yet when and where it takes place isn’t definitive. There are no cowboys in white hats or other familiar archetypes, only a desolate mood and lawless atmosphere that doesn’t shy away from the period brutality. While not horror per se, Brimstone has many horrific scenes to match its warped attitudes, telling its difficult to watch tale in its own time with no genre limit to stop it from going too far – a refreshing lack of cinema restraint which again, for many audiences, will cross the line. Brimstone is difficult to watch, yet there’s little vulgarity, no unnecessary visuals, and no major nudity. Corsets and pantaloons invoke enough saucy, leaving the story and characters to tell the numbing brutality instead of today’s desensitizing flash in the pan in your face style. However, I must say I don’t think I’ve ever seen that kind of… um… creative… use of intestines in a movie, ever.

So many Hollywood movies go through the motions, and Brimstone’s negative stateside reviews may be because American audiences aren’t accustomed to this kind of hardcore storytelling. Period piece horror dramas transcending genre like Brimstone such as Bone Tomahawk and The Witch are being made, however, their statement-making frights inexplicably remain elusive festival finds outside mainstream release. Spoilers aside, I didn’t cover all the details here simply because I didn’t take many review notes. I was too busy paying attention to the not for the faint of heart as Brimstone strips the viewer mentally and emotionally with its offensive no holds barred. Maybe rather than shying away from the viewing conversation, we should be embracing a quality motion picture that wouldn’t be any good if it didn’t push us to our limits as Brimstone does.