The novel As Above, So Below (co-written with Brian Thomas) is the story of Lorelei, a succubus who sets her sights the angel Azaziel. She can see he’s been cast out of Heaven, but is not yet Fallen, and she vows to do whatever it takes to bring him down.

Aza has plans for Lorelei, too. Together on the streets of LA, they encounter Ashleigh Johnson, one of Azaziel’s mortal charges, who is dying of hepatitis in the street. The angel rescues Ashleigh’s soul from two harpies poised to devour it — then uses it to possess Lorelei.

Taking Ashleigh along for the ride, Lorelei flees. They encounter demons, tempters, fallen angels, and damned mortal boys, while Lorelei keeps trying to swing the angel into her corner. Up All Night Horror Fiction Review said, “As Above, So Below has a creative plot, vivid descriptive imagery, relentless temptation, graphic horror, and fiery, fun sex.”

So where did the character of Lorelei come from? She was inspired by a woman I met at university. Kimmy lived across the hall from me in East Quad. She was beautiful: large very dark eyes made bigger by mascara, long mahogany hair flipped back from her face just so, heart-shaped face. She wasn’t very tall, but she was seriously stacked. I wasn’t surprised to find she’d done catalog modeling in high school. 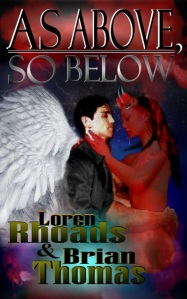 Mostly what I remember about her was her presence. Kimmy was a light. She had a huge laugh. Just by arriving, she made everything more fun. When she came into a room, every head turned toward her, but she wasn’t obnoxious about it. She didn’t seem to crave attention; she just accepted it as normal.

Kimmy had a way of singling out people and drawing them into her circle. During my second day in the dorm, she cornered me as I was about to skulk into my room. She and her roommate were going to play quarters with some other people on the hall so we could all get to know each other. Why didn’t I come?

Which is how I met my husband Mason, who’s been with me pretty much ever since. Kim drew him in, too.

Kimmy was always ready for anything. When Playboy came to town, looking to photograph Girls of the Big 10, she considered it. When she met another girl who had been contacted by a Greek millionaire who was looking for pretty girls to come lounge around on his yacht in their bikinis, she considered it. I think her curiosity about that lifestyle was matched by a small-town naivety that didn’t really guess what that kind of deal would demand in return. In consequence, I felt protective of Kimmy. I didn’t want her trusting nature to lead her into a situation she couldn’t charm her way out of.

Lorelei came directly out of that feeling. I wanted to explore the possibilities laid out in front of Kimmy, but know that Lorelei would survive them. I wanted to give Kimmy a happy ending and a boyfriend she wanted just as much as he wanted her. And I wanted to guarantee she’d never lose her fearlessness or sense of fun.

What inspires your characters? Do they derive from people you know or do you make them up completely out of your imagination?

Loren Rhoads is the author of The Dangerous Type trilogy, coming from Nightshade Books in 2015. She is the editor of The Haunted Mansion Project: Year Two and Morbid Curiosity Cures the Blues: True Tales of the Unsavory, Unwise, Unorthodox, and Unusual. Her stories about the succubus Lorelei have appeared in the books Sins of the Sirens and Demon Lovers. You can find out more about As Above, So Below at http://lorenrhoads.com/writing/as-above-so-below/.