With the topic of episode 113 of horror addicts being Bizarro fiction I’ve got a couple of works of literature that are not your average reads: 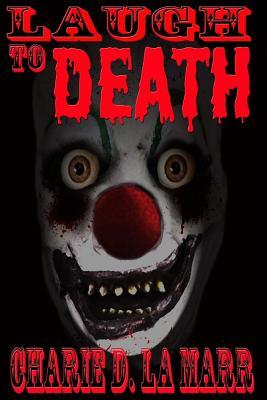 Salero was born into a family of circus performers. They were all acrobats but Salero decided to go against the family’s wishes and become a clown. Salero worked hard and he won the respect of his family and several awards for being a clown. He joined a traveling circus that’s on a tour of America and he is the star of the show, but he doesn’t fit in with the rest of the performers.

Salero is the only one in the circus that travels with his own Italian sports car along with having half a train car as his living quarters. Salero is clown royalty and he is also a serial killer. Not just any serial killer either, he targets young women who have a fear of clowns and he likes to sexually torture them before finishing them off. He makes kids laugh by day and women scream by night and as he travels from town to town he makes sure he covers his tracks. His killing spree may be coming to an end though as two detectives from New Orleans are on the case and closing in.

Laugh To Death by Charie D. La Marr is like no book I’ve read. After spending 9 years as a clown, Charie has started her own genre called Circus Punk and  Laugh To Death is as dark as Circus Punk can get. To say this book is disturbing is an understatement. I’ve never read sexual torture scenes that went on for so long. The Sex scenes are so descriptive and so unbelievable that even the most hard-core S and M fan may start squirming. Salero also  psychologically tortures his victims as he rapes them which makes this book even more shocking.

When I read a horror novel I usually don’t like it when it’s obvious that the author is going out of his or her way to shock me. In Laugh To Death it’s pretty clear that Charie D. La Marr is pushing the reader to the breaking point and trying to see how much the reader can handle. Though for me unlike other books I’ve read where the point is to shock, I wanted to keep reading this one even though I found myself feeling sick to my stomach. I can’t even describe the most disturbing scenes because I would be embarrassed to write about it, but the writing is so good in this book that I kept on reading.

The story may be pretty thin in Laugh To Death but the complex characters kept me wanting more. Salero may be a sadistic killer but there are some great scenes where the author makes him seem compassionate. It was also interesting finding out what his victims’ feelings are and how they question their own feelings. The two detectives in the story have a lot of great conversations with each other that made this book better.

Despite its flaws, Laugh To Death is a book that has its moments. In particular it gives a detailed glimpse at what a serial killer might be thinking and what the victims might be feeling. Beware though, this book is 436 pages and I would say 70 percent of it is describing brutal torture scenes. I think this book could have been better with a little less description and if it was a 100 pages shorter. That being said I would love to read more books by Charie D. La Marr in the future.

Next up I wanted to talk about a new comic magazine edited by Mark Slade and Gavin Chappell called Bizarre Fantasy. This is a new magazine available from Rogue Planet Press which is a division of Horrified Press. In the intro of the first issue of Bizarre Fantasy, Will Viharo talks about how the combination of comic books and pulp magazines have influenced pop culture. Bizarre Magazine combines both genres and shows that pulp fiction and comics are just as relevant today as they were in the past.

This magazine is a passion project started by several writers and artists that grew up with a love of comics and old pulp adventures. There are seven stories here that range from shocking to humorous and there is some great artwork to go along with it. One of the stories that I loved in this magazine is Remnant written by LA Sykes and illustrated by Steve Wenta. The story is about a dying man who is writing about a demon that has laid waste to the world he lives in. Though as you read you find that things may not have happened as the one writing the story suggests. This story was a great example of how you don’t need a lot of words to tell a good story.

Some of the other stories here include one about a man who is turned into a snake after sex. This was a funny story that gets into the guilt that goes along with sex. The other ones in this collection include a kid who is having nightmares about outer space and runs away to join a circus, a mystical female warrior, a strange creature who gets control of a giant robot that changes his life, an alien’s worst nightmare and a strange vampire tale. I can’t say enough good things about Bizarre Fantasy Volume 1. The art is great, the stories are well written and the magazine was simply a lot of fun to read. If you consider yourself an indie comic geek, this is a magazine that you don’t want to miss out on.