So you want something different? This week we have a band so alternative they aren’t a band! Well, OK sort of, but I’ll let them explain. This week we’re featuring “Cracks In The Walls” by HORRORFALL, which is the studio project of Colin C. Allrich and John Girgus from Los Angeles, CA. 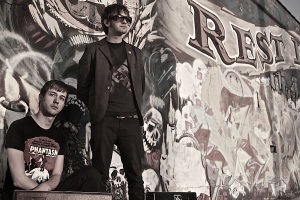 John explained, “The band started as a collaboration between the two of us aiming to create music more strictly for a licensing capacity as we were both fairly well established in our own projects. Over the year, it evolved into an idea Colin had for a looser musical collective involving some of his more recent collaborators.”

Colin added, “At first it was just us programming, playing guitars and trading vocals. As things started to grow, we invited some of our musical friends to contribute in various ways to the project. Cora Ripatti who I’ve worked with as a vocalist for some years now has come on to sing and song write for us, as well as Tammy Tomahawk (Cinderella Motel). I also invited Danny Fluck to do our live drums and Zac Venne to add his guitar skills.”

The song which the guys sent our way is a bewitchingly dark yet smooth track entitled “Cracks In The Walls”. Colin told me, “I think I can speak for John and say that we are quite fond of it. I started the initial programming and building these synth arps (sic) and he took to writing some melancholy vocals to it that we ended up seriously vocoding (sic) into something kind of haunting. It’s definitely our darkest track on the EP and it was the first one to spring to mind”.

The song itself was born from the title which Colin came up with and John took over from there. He said, “I like to elaborate off the existing titles. It gives me a launchpad and direction and usually surprising. It all comes down to relationships as it relates to drywall and plaster. You will eventually see the flaws in everything. It’s a simple matter of disillusionment. It was a time in my life when I was experiencing a great deal of that. Dreams were ending. Shines were fading. It’s got a defeated glow to it. I recorded the vocals on a hotel holiday while the inspiration for the content slept away unwittingly into a portable setup and a handheld mic. We turned it into a robot. An android with what little emotion left or developed shown as regret. It felt creepy and faded to do, and I think that was just perfect, but like I said… it’s not something I’d really like to have to go through again, but it was a bit cathartic. I do remember it fondly.”

Since HORRORFALL is a free form collective of artists it would be unfair to try to classify their music, but in their current incarnation, Colin has dubbed their sound as “Deadwave” and I dig that. I also loved it when John described it as “a punishing storm at sea with the odd melodic lighthouse.” You know, that touches me somewhere deep inside, man.

As for the name of the project, that was Colin’s idea. “I’ve always been fond of the written word, and especially plays on words. Karl Hyde (Underworld) has been a huge influence on me and how I write, as I literally grew up salivating at his every word. So it started from a simple stream of consciousness session in one of my notebooks as I scribbled it out. I had the intention of starting a project with it, and it just happened that John and I were talking about a real collaborative effort between us that I finally suggested it. Unfortunately that’s the real boring story of how it came about.”

Both John and Colin are transplants to Los Angeles and admit that the City of Angels is more than just a home. John said, “I grew up a few hours east. I do consider it my hometown now as I have been here over 12 years. I am an Angeleno. It seeps into everything I do. The city’s influence is immeasurable.” Colin traveled even farther, “I found my way out here for art school from Boston, Massachusetts. I would have to say that there is a lot of L.A. in my process of writing for the project. There’s some strangely broken yet idyllic atmosphere to L.A. thats very compelling to me. I love the urban decay of the street art, something I focus on in my art & photography on my blog.”

Another way that L.A. has helped the project is by shining a spotlight on them. Their single “Necroplasm Fix” was featured in the season three premiere episode of HBO’s hit vampire TV series, True Blood. John confided, “It’s garnered a great deal of YouTube hits, I’ll tell ya that. As uncool as it is to admit connections, the music supervisors are friends of mine and I work with them closely and often on various projects. In an effort to maintain cred however, it must be said that music can only be used if it’s right for the show. They’re very strict. Alan Ball has to like it, and I’ve never met the man. End of story. It’s true what they say about a connection getting a foot in the door, but that’s where it ends. The rest is up to you.”

In addition to other activities away from the project, both guys shared with me that they are fans of podcasts. John listens to Moheak radio, Buzzbands.la and dublab. Colin listens to Adam Freeland’s podcast and Warren Ellis’ 4am Podcast. For a laugh he also recommends Matt Berry’s podcast if you’re a fan of British humor.

Finally, they had some wicked great advice for new bands. John’s words of wisdom? “Quit. Get a job.” Colin on the other hand elaborates, “You’ve got the two sides going at it, for example the guy from Cake recently said that ‘music will be nothing more than a hobby to people in the next 10 years.’ Which I can see from his standpoint why he would want to say that. He’s part of the ‘old machine’ that generates record deals, and brick and mortar CD sales that really don’t exist anymore. Then you got guys like Trent Reznor who have some interesting ideas on how this new model of music can work. I guess I’d say just fucking do it, make music, put it on SoundCloud, give it away for free, and have fun. Because if you aren’t and you are looking for more than self entertainment at this point, you’re in for an uphill battle.”

Besides their website at Horrorfall.com, you can find their music on iTunes, Amazon, etc. You can also stalk them at twitter.com/horrorfall, and watch their videos on youtube.com/horrorfall, including the video for “Cracks In The Walls”.