Get to know the contestants of the Next Great Horror Writer Contest!

What do you love about horror? 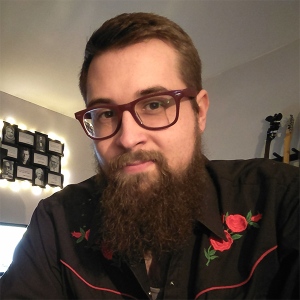 I’ve always been fascinated with what frightens me, in any form that happens to take, real or supernatural. My love of horror is simply an extension of that fascination and I’m constantly seeking books, movies, TV shows, documentaries, anything that causes my hair to stand up on end. I’m just chasing that dragon like everyone else at Horroraddicts.net.

What was the first horror movie/story/book/show that you fell in love with?

It was a movie that I now find hilarious because it’s so terrible. An adaptation of The Worst Witch that features the always wonderful Tim Curry, who even does a cheesy musical number that I still remember the lyrics to. I was terrified of the two ‘bad’ witches as a four year old and religiously rented the VHS from our local library. I think that movie formed the basis for my love of horror.

Can you describe the sort of horror stories you write?

I try to write stories that are subtle in terror and creep into half-conscious thoughts while falling asleep. There’s always humor and often a touch of the bizarre but they’re mostly about people. It’s my aim to write characters so human that when awful things happen, you suffer alongside them.

Do you listen to music while you write? If so, what?

I can’t listen to anything with lyrics because I get too drawn in by them and it scrambles my thought process. I do occasionally put on something atmospheric and dark. Horror soundtracks, classical music compilations, something creepy to get me in the mood.

Do you have any hobbies besides writing?

I adore music across all genres and spend a lot of time listening to it, as well as writing and recording songs. I play instruments to relax. The banjo has been highly therapeutic for me recently. I’m a guitar man at heart though and there’s little else that brings me peace like improvising over some twelve-bar blues.

What is your favorite part about writing?

There’s not much I don’t enjoy about the whole process. From spilling my guts onto the page initially to the editing process where I refine my words into something more coherent. That said, if I had to pick a favorite part it would definitely be the first draft because it’s just raw creativity and I get so excited with what I’m doing.

What is your favorite word?

Currently, gadzookery (thanks to Merriam-Webster for their Word of the Day feature), which refers to the overuse of archaic language.

What is your least favourite word?

I’m not a big fan of the word necessary.

What turns you on in a book?

In horror, I want to be scared out of my skin. Otherwise I like believable characters, gripping plots and a writer whose style is distinctive but doesn’t take themselves too seriously. The usual stuff.

Why should people be on team Harry?

I’m not sure. I’m barely on team Harry myself. If someone was to read what I have to offer though and deem me worth following that would be a dream come true in itself.

Get to know the contestants of the Next Great Horror Writer Contest!

What do you love about horror? 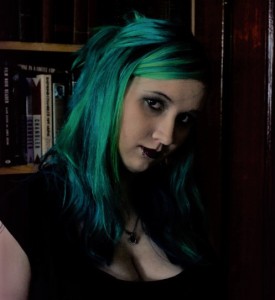 I love nearly everything about horror, but I think a lot of what it comes down to is the characters. As a genre, it explores the best and worst of humanity. I believe the most interesting actions come from the most extreme situations – which is a lot of what horror offers.

What was the first horror movie/story/book/show that you fell in love with?

That one’s a little tricky because I was already so invested in the horror genre before I really understood what it was. I do remember what made me realize I’d been into horror, and that was the movie Cube. I got so obsessed with it the first time I watched it, and I knew that I wanted to see more awesome, gruesome, paranoia-inducing things like that. That’s when I was able to piece together that a lot of the books and movies I had grown up with that were just normal stories to me, were actually supposed to be that same kind of scary for kids in my age group.

Can you describe the sort of horror stories you write?

I try not to limit my stories in terms of length, content or subgenre – especially when working with horror fiction. Describing my horror stories as a whole can be really tricky because of that, but one thing that most of them have in common is that they’re disturbing explanations I’ve concocted for real world situations I’ve actually found myself in.

Do you listen to music while you write? If so, what?

I listen to music when I do just about anything. I’m partial to punk and alternative. I’ve found metal is great for days I’m having trouble focusing because I’m less inclined to drop what I’m doing and sing along. Lately I’ve been listening to Pink Floyd’s The Wall a lot while writing horror, because it’s both very dark and very inspirational.

Do you have any hobbies besides writing?

I am very into gaming – that eats up a lot of my free time. I play guitar (badly) and bass (even worse.) I also spend a lot of time learning how to communicate in fictional languages. I can write in Draconic, Elvish script, Circular Galifreyan and can speak in both Klingon and Dothraki.

What is your favorite part about writing?

My favorite part about writing is that it makes anything possible. When I have my pen on paper, my freedom knows no bounds. I can be anyone and do anything, and when I come back home I have something to show for it.

What is your favorite word?

I have a lot of favorite words in a wide variety of languages. I love words, I think that’s why I’m a writer. Off the top of my head, I’d probably pick “Cacophony” because it’s so beautiful in comparison to its meaning, and it also happens to be the title of one of my favorite songs.

What is your least favourite word?

“Voyeur” is my least favorite word. I associate it with anger and embarrassment because it’s the word that my autocorrect always changes my last name to. It is however, also the title of one of my other favorite songs, by the same band.

What turns you on in a book?

Why should people be on team Cat?

I would really like to say people should choose me because I promise I’ll do my best to scare them if they do, but the truth is I’ll be doing my best to scare everyone anyway. That is what I’m here for. I sincerely hope that if people are choosing to be on team Cat it’s because they like my work – but I’m competing with fourteen very talented writers and I don’t believe there’s a wrong team to be on.