July 12th-15th / Vampire Film Festival’s Midsummer Nightmare / New Orleans La /Festival includes an appearance by Steve Unger author of In The Footsteps Of Dracula on Friday July 13th. There will also be several presentations on vampires in movies, a film festival and several vampire authors will be there. For more information go to: http://nolamidsummernightmare.com/home.

August 4th / Malfaktor at the OC Fair / Costa Mesa, Ca. / The OC Fair presents Malfaktor. Malfaktor is an experimental industrial metal band and has been called one of best up and coming electo goth industrial artists by several metal magazines. For more information go to: ocfair.com.

August 24th – 26th / Crypticon / Kansas City, Mo. / Included will be a tattoo show, a film festival including showings of Pan’s Labyrinth and Pumpkinhead, a Night of the Creeps reunion, a costume contest and a live performance from Devil Sex. For more information go to crypticonkansascity.com

May 25th-27th / Beyond Ghost’s Para-Horror Weekend / Buffalo, New York / Events include a zombie walk, ghost hunts, a film festival with a viewing of  Poultrygeist Night of the Dead Chicken and Slime City Massacre including a Q and A with Lloyd Kaufman along with appearances by Tyler Mane, Leah Gibson, James Winburn and several ghost hunting organizations will also be there. For more information go to: http://beyondghosts.com/paracon.shtml

June 1st / Club Sin:Burlesque / Montreal, Canada / An evening of feathers, latex, uniforms, boas and all fantasies you can think of, brought to you by the Montreal Fetish weekend. Tickets are $10 and includes live music, an appearance by D.J. Kommandandt and a performance from Cabaret Cleo. For more info go to: clubsin.ca

June 1st-3rd / Great Lakes Fright Fest / Petersburg, Michigan /  This is an event for home and professional haunters. Activities include a haunters against hunger haunted house, a werewolf wedding, haunt seminars, a vendor’s area, a movie night, children’s activities and a campfire social. For more information go to: http://greatlakesfrightfest.com/index.html

August 5th / EKLECTIK / New York NY / Lady Nyx and Lady Zombie throw down the red carpet for the premiere of EKLECTIK which is a fusion of Rock and Roll, performance art and the underground cultures. Goth/fetish/Vamp attire is encouraged and there will be a costume contest with the winner getting a custom pair of fangs. For more information go to http://www.facebook.com/home.php#!/event.php?eid=103946999701174.

August 20th / Unnameable Blood Bath Film Festival /Dallas Texas / Featuring independent short and feature films based on the works of H.P. Lovecraft. This is taking place on Lovecraft’s birthday at the historic  Texas theater in Dallas. For more information go to doabloodbath.com.

August 25-28th / Rue Morgue Festival of Fear / Toronto Canada / Special guests at this convention include John Waters, Robert Englund, Elvira, Doug Bradley and many more.  Some of the activities include a masquerade ball, a costume show, Q and A’s, movie screenings and special effect and make up seminars. For more information go to http://rue-morgue.com/rmp_fof.php 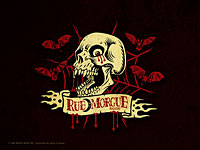 August 25th-28th / Horrific Film Fest / San Antonio Texas / This is an independent horror film festival which will include such movies as An Evening With My Comatose Mother, Psycho Killer Blood Bath, Get Off My Porch and others. There will also be a zombie walk and a goth queen beauty contest. For more information go to http://www.horrificfilmfest.com/

June 16-19 / Stoker Weekend / Long Island New York /Stoker Weekend is a Dark Fiction convention which includes panels, workshops, publishers, authors, a dealer’s room and a zombie prom . Some of the authors that will be there include Peter Straub, Douglas Clegg, Gillian Flynn, David Morrell  and many more for more information go to stokerweekend2011.org . 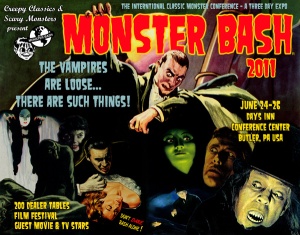 movies from the silent era through the 1950’s. Some of the events include viewings of Dracula meets Frankenstein, Return of the Creature,  Nosferatu and several other movies. There will also be a live theatric performance of Dracula’s Guest and Q and A’s with actors including Caroline Munro and John Stanley. For more information go to monsterbashnews.com/bash.html.

May 20 -22 / Cult Fiction Drive In / Jacksonville Florida / This is a convention that celebrates the classics of cult and drive-in cinema. Some of the guests include Sid Haig, Pam Grier, Dee Wallace and many more. For more info go to www.cultfictiondrive-in.com.

May 27- 29 / Crypticon / Seattle Washington / This is the largest horror convention in the pacific northwest and will include a writing contest, art contest, movie viewings and zombie apocalypse training. For more information go to crypticonseattle.com.

June 3rd -5th / Midwest Haunters Convention / Columbus Ohio / This is an event for haunt attraction, producers, actors and home haunters. It will include haunted house tours, an art show, make up demonstration and fashion show. There will also be a Ms Midwest Scary Pageant. For more information go to midwesthauntersconvention.com.