Something in the Woods is an old-school creature feature that ramps up the woodsy horror and delivers a satisfying climax to The Beast of Fallow Pines trilogy. While the first two books in the series featured solemn adults dealing with their grief alone, Something in the Woods lets loose with young adults drinking beer, smoking pot, and having sex.

If you haven’t read the first two books in the series, here are my reviews of Book 1 (The Darkness in the Pines) and Book 2 (The Beast of Fallow Pines). Click on the book titles for the links.

Written by Harlan Graves, Something in the Woods instills the vibe of a Friday the 13th film as four campers battle for their lives against a force of nature hellbent on horrific violence.

The story opens with two couples, Will and Laney and Bryce and Brittany, pumping gas at one of those rundown stations you see in most hillbilly cannibal movies. They encounter a strange, old man (wearing ragged flannel and patched jeans, of course) who warns the group to stay away from Fallow Pines.

“There’s something in the woods,” he says. “Sometimes hikers go up into those pines and never come back down again.”

Naturally, the campers go up into those pines, and we’ll get to see if any of them ever come back down again. Why are dire warnings from old-timers always ignored by young adults in horror fiction? Nobody likes a party pooper, I guess.

By page 6 of the 35-page story, the author Graves rewards readers of the first two books with a familiar sight that leads to more clues and eventually another intense battle with the Beast of Fallow Pines. As I stated in my previous review, Graves masterfully writes riveting fight scenes between humans and the Beast, which is the strength of all three tales.

Like Book 2, Something in the Woods finishes on an ominous note. The final sentence blends doom with a shred of hope, signaling the end of a trilogy worth reading for fans of cryptid horror.

NEXT UP: Chapter Thirty-Eight: Letters from the Big Man. I review the 2011 film directed by Christopher Munch.

The Beast of Fallow Pines is Book 2 in a cryptid trilogy written by Harlan Graves. The story follows a recently divorced man named David who relocates to his late father’s abandoned cabin in the remote wilderness to escape the painful memories of his past. His only companion is his dog, the Great Pyrenees named Argus.

The Darkness in the Pines and The Beast of Fallow Pines not only share a bloodline, but they also share plots, styles, and tones. Both feature troubled men in the same isolated location stalked by a creature in the woods. Even the warning signs are similar – a decapitated deer instead of a bear, for example.

Before the inevitable encounter, David senses the dark presence of the Beast. Sounds wake him up in the middle of the night. He sees glowing eyes in the darkness. Basically, The Beast of Fallow Pines is the same creature-feature storyline as Book 1 but adds a dog to the mix.

As a fan of cryptid horror, I’m not looking for razzle-dazzle or originality. Just make the Sasquatch encounters interesting, which is what Graves is able to do, and I’m hooked.

The Beast of Fallow Pines gains steam when Argus disappears into the woods. When David returns from his unsuccessful dog search, he finds his cabin ransacked .. and you can guess who the culprit is.

Like his father before him, David must face the Beast in another well-orchestrated fight scene. The author Graves knows how to pack the action and suspense in a gritty man-versus-beast battle. Unfortunately, the book ends with a cliffhanger of sorts, which may leave some readers without a satisfying resolution.

However, there are three parts to a trilogy — not two, and I’m sure Graves will address any loose ends in his third book titled Something in the Woods.

NEXT UP: Chapter Thirty-Seven: Something in the Woods. I review Book 3 of The Beast of Fallow Pines trilogy.

Bigfoot in the Bronx is another rip-roaring creature feature by the king of cryptid fiction, Hunter Shea. Released in March by Severed Press, Bigfoot in the Bronx takes the concept of the 1987 film Harry and the Hendersons to the next manic level, although the story has a closer kinship with King Kong.

Friends since childhood, Shay and Vito head to the Catskills for their annual deer hunt. The men are struggling financially and feel the pressure of bagging a deer to help feed their families.

When they witness a Bigfoot kill a deer and then drop to the ground apparently dead, Shay’s financial desperation overtakes his common sense. “We have proof of Bigfoot right in front of us. We’re going to be rich!”

The men load the Bigfoot’s body in their truck and store it in a shed in Shay’s backyard. Of course, Bigfoot isn’t dead; it was merely incapacitated by tranquilizer darts from a hidden shooter.

Bigfoot wakes up inside Shay’s shed and goes on a rampage that starts in a cemetery and spills over onto playgrounds, golf courses, subway cars, and the Bronx streets. Add in the day of the year – it’s Halloween – and the confusion escalates as Bigfoot is often mistaken for a man in a costume.

Shay and Vito feel responsible for introducing the monster into civilization, and their deer hunt transforms into a Bigfoot hunt. At one point, the men dress up as Elmer Fudd and Bugs Bunny to justify carrying guns in public. Yeah, it that’s kind of crazy adventure.

Amidst the chaos and destruction, Shea includes some unexpectedly heartfelt scenes, much like Peter Jackson did in his 2005 film adaptation of King Kong. I felt Shea was rooting for his Bigfoot from the get-go.

While Shay and Vito are not the most likable duo to headline a creature feature, they grew on me by the end because of their empathy and familial motivation. Ultimately, though, Bigfoot in the Bronx is pure madness and mayhem that would make a perfect Saturday night movie on Syfy.

NEXT UP: Chapter Twenty-Eight: The Kiamichi Beast Expedition. I review the 2021 documentary.

Bigfoot Trail is a horror novel by Eric S. Brown released in 2019 by Severed Press. Brown is an author who loves writing about Sasquatch, and Bigfoot Trail is another entry into his lengthy catalog of cryptid fiction. 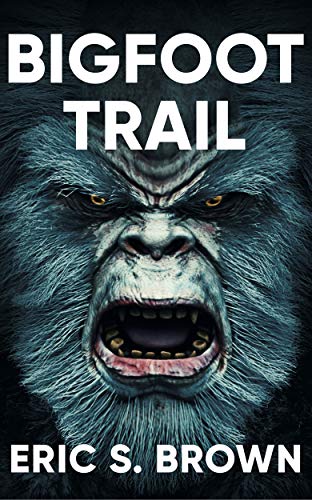 Bigfoot Trail is a grisly tale about campers, hikers, and forest rangers who are slaughtered in the woods by a group of Sasquatch. The only wrinkle in the story is caused by one of the hikers, a Wiccan named Jade. She convinces the other hikers to participate in a summoning ritual to call forth the “spirit of the trail.”

Flames shoot up from the campfire during the ritual, but Jade is not sure what she summoned. The Sasquatch and the hikers find out soon enough as another mythic creature from Cherokee folklore joins the fray.

Bigfoot Trail is basically a B-movie creature feature, heavy on gore and action and light on exposition and character development. The book gave me a Friday the 13th vibe with the Sasquatch attacks reminiscent of a Jason Voorhees killing spree. Like Friday the 13th, the only question left to answer in Bigfoot Trail is who, if anyone, will survive the night?

NEXT UP: Chapter Eighteen: The Man Who Killed Hitler and Then the Bigfoot. I review the 2018 film directed by Robert D. Krzykowski.

THE BIGFOOT FILES | Chapter Fifteen: Night of the Sasquatch

THE BIGFOOT FILES | Chapter Four: ‘The Road Best Not Taken’