Hey Addicts, Mimielle here. On May 1st, I will attend the premiere of quite a unique event. Takashi Murakami is one of the world’s most influential and acclaimed contemporary artists and a self-proclaimed Japanese pop culture connoisseur. An almost Otaku King.

I will be at the US screening of his first feature-length film, Jellyfish Eyes (Mememe no Kurage) at the Dallas Museum of Art on May 1st with a Q & A afterwards. The film will then make 8 more stops on a cross-country museum tour of the United States afterwards. Tickets vanished at astonishing speed everywhere.

You can see the trailer here. 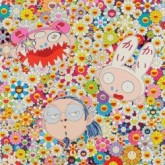 The film, released in Japan in 2013, has fanciful monsters of course…as compelling as some of his familiar Superflat  art canvas characters shown above – Mr. Dob and the playfully menacing mascots of his same-named art production company KaiKai and KiKi…but children are the focus (and the stars) of his first long film. When asked why, Mr Murakami replied:

“I want to highlight Japan’s complicated social issues in a way that children can appreciate so perhaps when they become adults, they will be better equipped to deal or even improve these issues. Children are very smart, therefore it is imperative for them to know the world we live in is full of traps, dangers and unpleasantness. I am not a pessimist, I am a realist.”

He concludes with his opinion that telling children the harsh truths will prepare and allow them to create and persevere in spite of hardship.

It is no small wonder, with his dedication to promoting and supporting young artists, that the 52-year old Mr. Murakami would want to reach out to them as young as possible with a wake up call to question things and the message to continue to create despite adversity. My photos and a report will follow here on the blog after the event but I am definitely wearing my best waterproof mascara for this, you can bet on it!

August 5th / EKLECTIK / New York NY / Lady Nyx and Lady Zombie throw down the red carpet for the premiere of EKLECTIK which is a fusion of Rock and Roll, performance art and the underground cultures. Goth/fetish/Vamp attire is encouraged and there will be a costume contest with the winner getting a custom pair of fangs. For more information go to http://www.facebook.com/home.php#!/event.php?eid=103946999701174.

August 20th / Unnameable Blood Bath Film Festival /Dallas Texas / Featuring independent short and feature films based on the works of H.P. Lovecraft. This is taking place on Lovecraft’s birthday at the historic  Texas theater in Dallas. For more information go to doabloodbath.com.

August 25-28th / Rue Morgue Festival of Fear / Toronto Canada / Special guests at this convention include John Waters, Robert Englund, Elvira, Doug Bradley and many more.  Some of the activities include a masquerade ball, a costume show, Q and A’s, movie screenings and special effect and make up seminars. For more information go to http://rue-morgue.com/rmp_fof.php

August 25th-28th / Horrific Film Fest / San Antonio Texas / This is an independent horror film festival which will include such movies as An Evening With My Comatose Mother, Psycho Killer Blood Bath, Get Off My Porch and others. There will also be a zombie walk and a goth queen beauty contest. For more information go to http://www.horrificfilmfest.com/