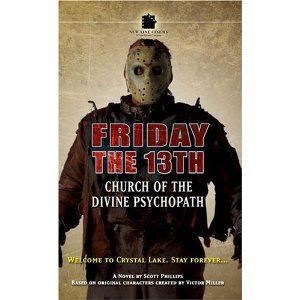 While looking for slasher horror novels I found a book right away that really shocked me. It was Friday the 13th Church of the Divine Psychopath by Scott Phillips. The reason this book shocked me is because it’s actually a novel based on Jason from the Friday the 13th movies. I’m not a fan of the Friday the 13th films and I wouldn’t think that Jason would be a good subject to base a novel on, but this book looks pretty good.

This is actually the first book in a series based on Friday the 13th’s Jason. The story is about a religious cult who goes to Camp Crystal Lake so they can revive Jason. They think he will become an angel and do gods work. Needless to say things go badly, Jason starts killing everyone and a secret government agency comes in to take down Jason and the cult.

There is also a series of novels based on A Nightmare on Elm Street. The first book in the series is called Suffer the Children by David Bishop. Six teenagers have volunteered to be in a sleep study where they will test a new anti-insomnia drug, little do they know that by taking the drug they have now become the plaything of Freddy Kruger.

Another book I found was They Never Die Quietly by D.M. Annechino. Detective Sami Rizzo is in charge of a task

force investigating serial killings in San Diego. The killer on the loose believes that god has given him absolute authority to purify his unholy victims. Sami finds the serial killer but is captured and must outsmart the killer to escape.

Staying with the theme of serial killers is I Am Not A Serial Killer by Dan Wells. This book kind of has the same story as Showtime’s Dexter. The lead character is a high school student named John who happens to be a sociopath and is obsessed with serial killers and dead bodies. John follows a set of rules that keeps him from giving in to his dark side. He also helps out in the local mortuary where his mother and aunt work. One day while inspecting bodies that have been slashed open in the exact same way, John realizes that his town has a serial killer and decides to track him down so he can study him.

One of my favorite novels that fits in the slasher genre is The Island by Richard Laymon. The story is told from the diary of a teenager named Rupert. He had taken a yacht trip with his girlfriend’s family to a deserted island for a picnic. While enjoying the picnic they see their yacht explode and are stranded. To make things worse they soon find out that they are not alone on the island. Two members of their group get their throats slashed and the rest of the castaways have to find the killer and escape the island.

I’m a big fan of Laymon. This book is filled with several plot twists and non stop action. If you are willing to suspend your disbelief, overlook some ridiculous scenes, and you don’t offend easily, this is a good read. The only part I didn’t like was the ending, which was meant to be shocking but only seemed to make me mad. I don’t want to give it away, you’ll have to buy the book.

There are two other books that I wanted to mention, I didn’t have to much to say about these because I couldn’t find much of a description on either one but they did fit the genre so I thought they were worth bringing up. The first book is Endurance by Jack Kilborn which follows a killer who is hunting down and killing female athletes.

The second book is The Killing Kind by Bryan Smith which is about a group of college kids partying at a beach house. Little do they know that their party is about to be crashed by a pair of homicidal maniacs.

Know of any other slasher books? Please let us know.