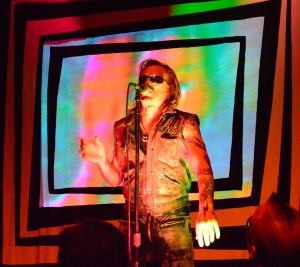 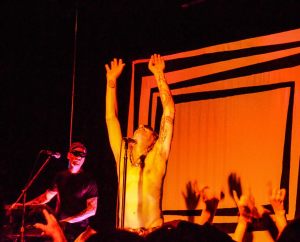 My Life with the Thrill Kill Kult’s long-awaited new release was unleashed in May 2014, followed by a steady 6 week tour of the United States. I was fortunate to catch their show in Philadelphia and my band opened for them in Seattle. The last Thrill Kill show I caught was in Seattle in 2012 and this new tour was a bit scaled down, lighter and warmly funky. Their support tour opener, DJ Toxic Rainbow, sets the mood for a dancier version of TKK. (DJ Toxic Rainbow won the Beatport.com THRILL KILL KULT “Kooler Than Jesus” remix contest, and has since done various remix work for the band and Groovie’s side-project DARLING KANDIE.) Amongst old TKK favorites: a remixed version of “Swine and Roses”, a fun call and response to “My Life with the Thrill Kill Kult” and my personal favorite “After the Flesh” from “The Crow” Soundtrack. 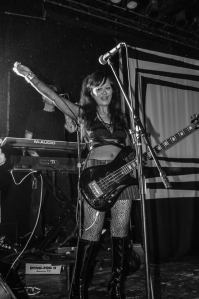 The new CD is the band’s 13th certainly versatile enough to be played at any club. The influence of 70’s electro music and some spaghetti western-esque guitars grace the collection of music. My personal favorites being: “Neon Diva”, “Hell Kat Klub” and “The Way We Live Now”. The current lineup of My Life with the Thrill Kill Kult is: Groovie Mann, Buzz McCoy, Mimi Star, Justin Thyme and Westin Halvorson. The band has progressed with an assortment of members over the past 25 years. Taken directly from the biography on the Official Thrill KillKult Website: 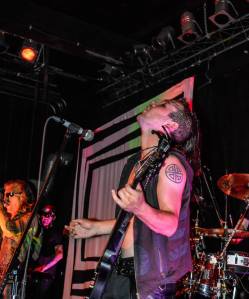 It was in the fall of 1987, in a neighborhood Chicago bar. Artist and performer Franke Nardiello met with newly transplanted Bostonian musician Marston Daley over drinks. They crafted a shocking and lurid film concept, MY LIFE WITH THE THRILL KILL KULT. Inspired by a shared love of tabloid tales of sex, kitschy horror and exploitation films in the style of Russ Myers, the concept came naturally. The name was ripped straight from a British headline Nardiello had noted while living in London. With limited experience and resources the film was scrapped, but work on its accompanying soundtrack continued. Legendary Chicago record label Wax Trax! Records were drawn by the hard beats, distorted vocals, rich instruments and bizarre film samples. They released a three song EP in 1988. The full–length album, I SEE GOOD SPIRITS AND I SEE BAD SPIRITS, followed the same year. People seemed to love it almost instantly, and so, their dreams of celluloid became a reality on vinyl.

In the spring of 1989, Nardiello and Daley took on the names Groovie Mann and Buzz McCoy (respectfully). They recruited band members from bar stools and created a back-up group of singers/dancers dubbed the BOMB GANG GIRLZ. They jammed the crew of nine into a van with musical and stage gear alike, and hit the road. The tour had a “Cabaret From Hell” vibe and it aroused the curiosity of the kids and media, establishing THRILL KILL KULT as one of America’s premier industrial/electro acts. 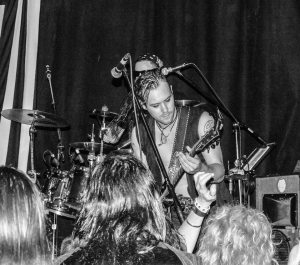 They continued to fuel the underground club dance floors with tracks like “The Days Of Swine And Roses”, “Kooler Than Jesus” and “A Daisy Chain 4 Satan”. The Parents Music Resource studio album entitled: “Spooky Tricks” It is fun, interesting and Center (PMRC) was appalled. It wasn’t long before Groovie and Buzz started experimenting, combining disco bass with wah-wah guitars and dabbling in big bad burlesque brass. The result was SEXPLOSION! (1991). It was lusty and dangerous, giving them their first taste of commercial success with “Sex On Wheelz” and attracting a whole new set of fans. 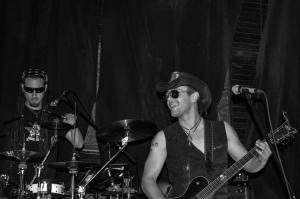 The explosion of popularity found TKK on Interscope and in 1993 they released 13 ABOVE THE NIGHT. Like all of their releases, it had an overpowering cinematic quality so it wasn’t surprising when Hollywood took notice. The duo found themselves writing for an assortment of soundtracks like Paul Verhoeven’s “Showgirls” and Ralph Bakshi’s “Cool World.” They even stepped in front of the camera for a cameo in the cult classic “The Crow” to perform the song “After The Flesh”. 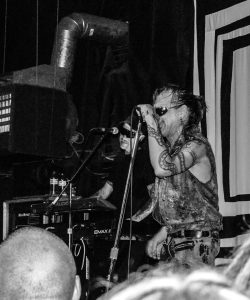 They have released 2 albums on their own label, SLEAZEBOX MUSIC, as well as a BOMB GANG GIRLZ cd titled A TASTE 4 TROUBLE, written and produced by Buzz McCoy. It features the formidable long time vocalist and dancer Jacky Blacque, with a guest appearance by Groovie Mann.

Still a favorite among directors who are looking for sexy sleaze, their music is frequently in both major and independent films and television, most recently in Sexy Evil Genius (Lionsgate) But it doesn’t end in with the studio, film and tv, Groovie and Buzz still take the KULT out on tour extensively along with a rotating cast of depraved characters. In 2010 they re-created their role in the “Sextacy Ball” tour along with Belgium’s outrageous Lords of Acid. In 2011 they performed at the “Wax Trax! Retrospectacle” show in Chicago, with old label mates Front 242 and Revolting Cocks. And the fall of 2012, the KULT celecrates their milestone 25th anniversary with a 7 week tour of the States.

MY LIFE WITH THE THRILL KILL KULT continue to morph and stretch the fabric of music as we know it, always remaining true to the KULT and true innovators.

My Life with the Thrill Kill Kult on the interwebz:

The new CD is a must have for your Thrill Kill collection:

Check them out on Soundcloud, where you will also find some amazing remixes:

All photos courtesy of Tony from Fierce Bad Rabbit