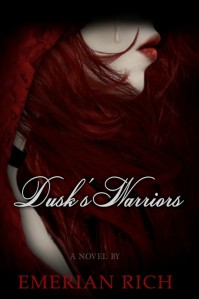 Hey Night’s Knights fans, the wait is over for the sequel to Emerian Rich’s story of vampires trying to create the perfect offspring is now being released. The first two episodes of Dusk’s Warriors is available on the iTunes feed for Night’s Knights or you can listen to them by going to emzbox.com.

Dusk’s Warriors will have music from Factory of Dreams. Some of the voice talent in the podcast besides Emerian Rich will be Ariel DaWintre, Camellia Rains,  H.E. Roulo author of Fractured Horizon, Mark Eller from the Hellhole Tavern and Mike Bennett author of Underwood and Flinch.

I’ve been looking forward to Dusk’s Warriors ever since I finished Night’s Knights. Some of the things I’m hoping for out of this podcast is more background information on Sandro and the coven of vampires he is with when he meets Severina. We do know Sandro’s origin but I wanted to know more about how he knows for sure he is serving god and what would happen if he decided to question god. I also wanted to know more about the events leading up to Artemisia’s death and I want to hear more about Timothy and why he thinks the way he does. I would like to hear more from Annabella as well.

over time that I didn’t need to read a new one. Then the little voice in the back of my head kept saying “you like the horror addicts podcast, you liked Emerian’s short stories so your going to like Night’s Knights, come on give it a shot.” So I finally gave it a shot and listened to the podcast.

I was hooked immediately, the story was good and it worked on so many levels. There is a tragic love story (actually I counted at least 5 tragic love stories in the book, Night’s Knights would have easily fit into the Dark Love episode of horror addicts that we just had), lots of action, blood, sex, romance and a little mystery. Everything you need for a good horror story. I also enjoyed the imagery in the book.  Some of the descriptions of San Francisco early in the book made me feel like I was there without ever being there and some of the other locations such as Julien’s castle and the crypt came to life as well.

The best part of Night’s Knights though is the characters. My favorite was Kristine, I looked at her as a very nice compassionate person who is just trying to find her place in this world and I really wanted to see her have a happy ending. I also like Markham because he has such a tragic story. He has a good life but it was taken away from him and then he is given a second life as a vampire that he is never really able to adjust to. Even though he doesn’t have a very big role I also liked the character of Danny, I kind of looked at him as a male version of Kristine. (By the way Emz if your reading this, if Danny is not in Dusk’s Warriors, is there any way you can make another sequel staring Danny and call it Danny Saves the World? I think so much more could have been done with him).

Good Character development is always what I like to see in a book. So my favorite scenes in Night’s Knights isn’t the action or the romance but the parts where the characters are deciding what they are going to do next. I loved it when Kristine is looking at the pros and cons of becoming a vampire and I also loved when she says how she feels after feeding on a homeless person. Another good part was near the beginning of the book when Jespa is feeling conflicted about sleeping with Craig. Early on Jespa comes across as a tough mean person but as the book progresses you see that she is much more than that. I also enjoyed when Jimmy has his last conversation with Markham about being a vampire, you end up feeling very sorry for Markham and really admiring Jimmy.