Creepy crawlies. Arachnophobia. Insectophobia. Entomophobia. All speak to the deep-seated fear or uneasiness that we may feel at the thought of insects. Logically it makes no sense. These are creatures that are a fraction of our size. Creatures who, for the most part, cannot cause any real damage. The problem? We focus on the weird, the gross, and the aggressive traits that they have. And we wonder what if? Our cinema has cashed in on these fears. Below are three movies of the horror genre that invoke the fear of bugs. 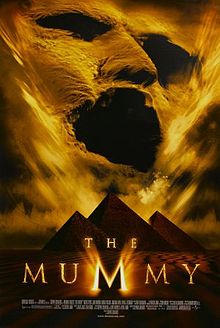 The Mummy, while not a true horror, uses bugs to incite horror and fear in the audience. Anyone who has seen the movie can remember what happens to the two grave robbers. The men chip fossilized scarabs from the wall and stash them to sell later. Unfortunately for them they pried off more than they could handle.

The innocent looking item becomes a deadly bug that manages to crawl through a grave robbers shoe, burrow under his skin. His death is painful and filled with agonized screams. This scene is relatively minor as far as hard-core horror addicts are concerned, but to people uninitiated with the horror genre, the portrayal is horrifying.

Why? It portrays a rare bug—something we already have an aversion to—with enough power to overpower a strong man. Even worse, the bug appears from a seemingly safe item. The movie hints that all it will take is that one bug. And you know what buddy? You won’t even know when it’s coming for you. You cannot win.” 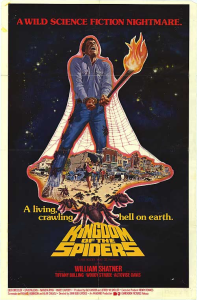 Nothing will tweak your inner arachnophobe faster than Kingdom of the Spiders. In this movie, swarms of tarantulas begin killing farm animals. Enter Rack Henson—a vet—who goes to investigate the deaths. Diane Ashley—an entomologist— exclaims their findings “spiders in this area have organized themselves into an aggressive army.” By that point it is far too late. The spiders are already in the midst of a massive attack on the unsuspecting populace of a nearby town. Hundreds of spiders attack panicking townspeople. The survivors are trapped in a hotel.

Why is this tactic so successful? The film takes an insect that looks threatening and has been known to cause harm to humans. (While tarantulas aren’t poisonous, many experience allergic reactions). They then create a swarm. While a few small insects may not be able to damage a human, an entire swarm can decimate the human advantage.

We’ve recently all been horrified by the Nationwide commercial with the giant baby. Arachnia digs into a time-tested horror motif: the giant bug. The movie won’t scare avid horror consumers today due to its horrible graphics, but it scared the bejesus out of viewers when it first came out. Today it gets its screams and cringes from the younger audience. Sit a seven-year-old in front of this flick and they’ll be invading your bed for weeks.

The movie features a sleazy college professor, his students, a heroic pilot, and a cranky old man stuck in the middle of nowhere in a desolate cabin. Not long into the movie the group is attacked by a group of giant spiders. Who will survive?

Why is this tactic successful? We don’t fear spiders because they are too small to do much damage. By increasing the size, you create an enemy that has a chance of winning.  As a sedentary people with minimal defense skills (for the most part), we lack the ability to defend ourselves against one highly poisonous, bulletproof, hungry spider that is the size of a small car. And that is terrifying on a psychological level.

Horror films cash in on the human minds ability to wonder what if. All types of insects are an easy niche to incite fear. After all, people are already horrified by the idea of insects. That feeling is only heightened when they are seen in swarms, increased in size, or given enhanced traits.

Erika Henrike–known as OddlyErika on Twitter–has been hooked on horror since she saw Signs. Now she and her friend have giggle fits at the shameful horrors Hollywood puts out. Curse of Chuckie–now that was hilarious. You can read more of Erika’s work here: http://www.preciousmonsters.com/2013/09/the-portrayal-of-hoodoo-and-other-magic.html