Plotline: A medieval warrior’s gruesome collection of heads is missing only one – the monster that killed his daughter years ago.

Who would like it: Fans of sword and sorcery, folklore, vengeance. monsters, mythology and movies about men setting off on quests.

High Points: The fight scenes. For all of them except the last one is shot in a way that invokes your imagination and unlike Conan the Barbarian or any other Knight in Shinning Armor that goes off to fight all the horrors after each battle he returns injured, making the next battle all the more perilous.

Complaints: Some of the personal choices he is making, giving the things that he is doing monster hunting, doesn’t make sense and could have prevented his ultimate peril. Another complaint I have is about the potions and elixirs, there is a scene in the movie where he seems surprised about what one of his own concoctions is capable of and with as much time he spends creating them and what he is using them for it just seems unlikely that he wouldn’t know what it would do.

Overall: I liked it and I think you will too

Where I watched it: VOD

When she’s not terrorizing her fans and racking up frequent flyer miles by gallivanting all over the country attending fan conventions and writer’s conferences she reviews indie horror and science fiction films for both her personal blog and HorrorAddicts.net

We’ve all seen horror on the big screen but have you ever seen a live Victorian Horror show?  I recently had a chance to interview  John DiDonna, the creator of Phantasmagoria Orlando who has been bringing live horror to audiences for seven years. 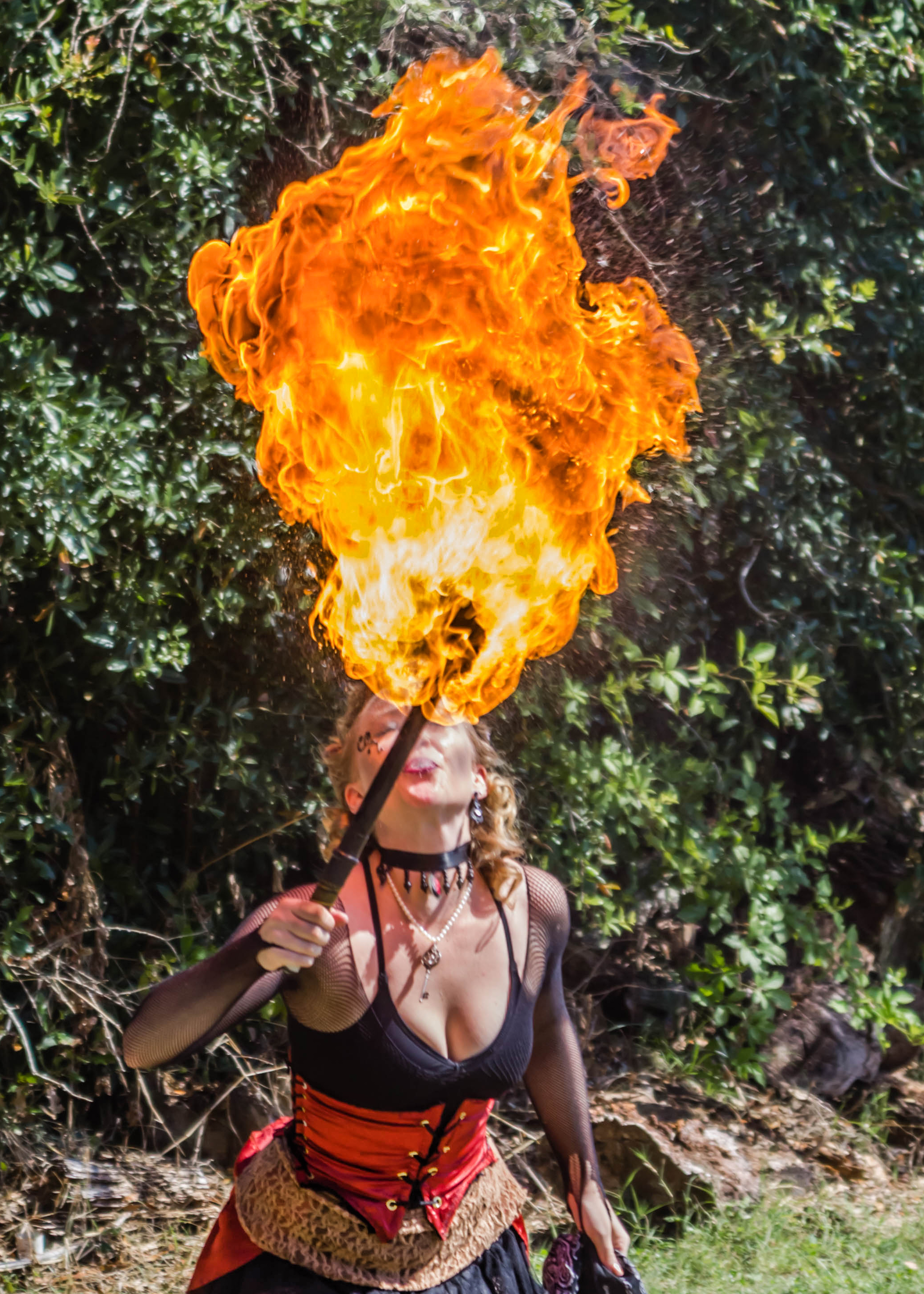 So many words to describe. . . it is a Whimsically Macabre Victorian Horror Circus!  We bring stories of horror to life in “Phantastical” dance, live music, explosive stage combat, large scale puppetry and enthralling storytelling!  It has also been described by many as a “Graphic Novel come to life!”

What is the legend behind Phantasmagoria?

The legend goes back to the ancient storytellers of Greece who wandered the countryside, . . never knowing that they were immortals born of the story. They wandered alone, till one day two came upon each other and they realized they were a race differing from mortal humans, and they travel through the centuries finding each other, and bringing the stories to horrific life!

When did Phantasmagoria start?

shows each year, and eventually to a 12 month a year ongoing theater troupe!

What was the inspiration behind it?

I have spent my entire life loving horror, but most especially literary horror. The dread of Edgar Allan Poe and gothic writers who brought these stories to feverous minds.

What were some of your past performances?

We have performed our large mainstage show for the entire month of October for the last seven years at the Lowndes Shakespeare Center.  Over that time we have performed close to 60 stories of the macabre, all culled from literary horror, mythology, legend and folklore (all adapted from the public domain into our own style of storytelling)  With that we also have two touring shows, and a myriad of special event style shows that we perform 12 months a year that range from fire performance, to dance, to storytelling to even children’s shows of the whimsically macabre. 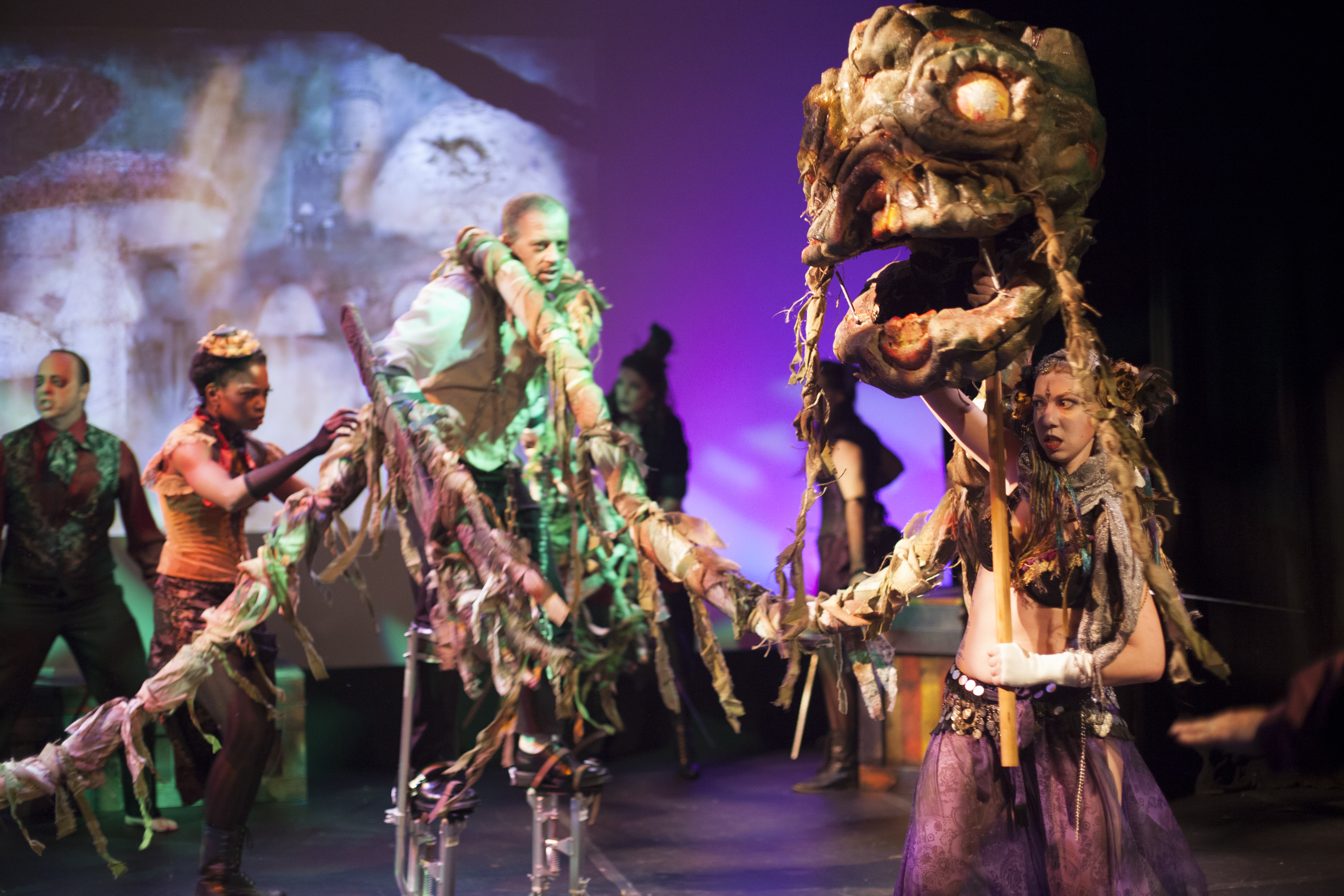 How long does it take to put a performance together, including set design, writing of the script and finding the right actors?

Oh my. . . for the script? About a year of research, story reading, inspiration, adaptation, edits, etc. Then for rehearsals about 2 – 3 months for developing a mainstage show. The puppets are the big design element, sometimes as large as 20’ long and 14’ high.

The troupe itself is ongoing so the actors are already here for the most part, though we add new people through our yearly auditions.

What do you look for when someone wants to be a part of your organization?

Ensemble. Collaboration. Energy. And a multitude of skill sets from movement to dance to stage combat

to acting to puppetry etc.

How many performances do you put on per year?

Between mainstage and special event/appearances probably topping 50 at this point in time!

When is your next performance?

Coming up we have our touring show “Wicked Little Tales” in Baltimore, Maryland from March 17 – 20th, then we perform a series of mini shows upon our return, and then our second touring show opens for the Orlando International Fringe

Theater Festival in May 2016. The summer is filled with appearances and children’s shows, and then this fall we premiere Phantasmagoria VII “The Cards They Are Dealt” for the month of October!

What can people expect at the show?

To be enchanted, to be frightened, to be overwhelmed with all the senses. . . to become PART of the show as the audience IS the show, they share in these adventures with us, trapped as we are in the same room with

these stories. We have heard many a scream, many a gasp, many a laugh. . . and even some loving tears throughout the years.

What does Phantasmagoria have planned for the future?

To keep touring and growing! We have mini troupes planned now for further performances and we want to bring the stories to as many people around the globe as we can! We are experimenting with some interesting technologies right now too to bring that to the world through this little computer screen.

Check in with us at:

It’s the Christmas season again and guess who will be coming to town? I’m not talking about Santa claus, I’m talking about Krampus. A lot of people out there still don’t know much about Krampus but kids in Germany and Austria fear him. In the last few years more people are finding out who he is. A movie about Krampus came out this year and he was featured on a musical episode of the cartoon series American Dad. So if you don’t know who Krampus is its high time you found out.

Austria had been celebrating the Saint Nicholas festival since the 11th century. During this festival on December 6th people celebrated Saint Nicholas by giving presents to good children and having a massive feast. In the 17th century The Saint Nicholas festival became a lot darker with the introduction of Krampus. While St. Nicholas rewarded good children with presents, Krampus became St. Nick’s polar opposite. Krampus accompanied St. Nick in his sleigh and punished the bad children by hitting them with a switch, tying them up in rusty chains and taking them to hell.

Krampus may not be as well-known in North America but in Austria and other parts of  Europe, Krampus has his own holiday the day before St. Nick’s day. On December 5th Krampusnacht is celebrated with people dressing up as demons and other evil creatures. There is usually a parade, bonfires, and Krampus shows up to give naughty children coal. There is also massive amounts of alcohol consumed at this celebration and it’s customary to offer Krampus schnapps because he needs it to take care of all the bad children.

cards became all the rage and several cards had artwork depicting Krampus and showing the dark side of Christmas. In North America Santa took on Krampus’s role as well as Santa Claus gave presents to good kids and coal to the bad. Krampus finally started to gain popularity in the U.S. in 2004 when artist and writer Monte Beauchamp released a book that contained reproductions of Krampus Christmas cards from the 1800’s. He also went on to write a book called Krampus: The Devil of Christmas.

Being a horror addict I love a the idea of what’s basically a supernatural monster associated with Christmas. I like to hear about Santa and his reindeer but it’s also nice to add a little terror to the holiday season and Krampus gives me the horror lift that I need. As if Black Friday and long lines at a cash register wasn’t scary enough. Also Krampus does the world a great service by taking care of all the bad kids for us.

To Find out more about Krampus check out these sites: