Mercy Hollow was born in Florida, where she was terrorized by alligators, fire ants, rabid raccoons, sharks, drunken college students, and 100% humidity. She lived on three continents (four if you count the foreign realm of her imagination) and planted her feet in San Francisco. She has a love of hockey, motorcycles, and anything deemed weird. She writes about gritty underworlds, twists, deception, strong men, stronger women, and a hidden part of Chicago you’ve never seen. She is a freelance editor and workshop facilitator.

Mercy is a woman of many talents with a fascinating past. We spoke of forensic psychology, writing, and her take on good and evil.

NTK: Welcome to Chilling Chat, Mercy. Thank you for chatting with me.

MH: Glad to be here. Thanks for having me on.

NTK: You have traveled the world and visited many continents. What’s the scariest thing that’s ever happened to you?

MH: While I’ve had some interesting, blood pumping, and challenging situations overseas, the scariest was in my home state of Florida. I was lost alone in the Everglades at night for hours with only a lighter.

NTK: Wow! How did that happen? And, how did you get out?

MH: I may have made a bad decision of who to hang out with for the evening. We had a disagreement and they left, taking the boat with them. I have a good sense of direction and a strong desire not to be eaten by alligators so I took my time, avoided the water, and eventually found a path.

NTK: Good job! Did this incident inspire you to become a horror writer? What got you interested in writing horror?

MH: With my previous career in forensic psychology, I got to delve into the darkest parts of people’s minds. See what people were capable of, both to cause ill and overcome tragedy and disaster. I love stories that capture these emotions and could get inside me. Characters that stuck with me, grabbed on, and wouldn’t let go. Writing fiction was a great escape from the real life hardships I saw every day in my job. But, I like dark things. Nighttime is my happy place, so my writing tends to flow to struggle and fight against it.

NTK: Did you solve any crimes during your time in forensic psychology?

MH: I worked with a lot of violent offenders and victims of violent crimes. I was involved in cases, prevention, and rehabilitation. I worked with all the agencies involved, from probation, parole, jails, and mental hospitals to court, police, schools, foster care, and emergency rooms. A team of people working together to make the streets and homes safer and help people that need it, including the offenders. I got to understand and see the other side of violent crime that many don’t. There are stories beneath every action and choice.

NTK: Did you draw on this experience when you wrote Scythe? Did it help you develop your villains as well as your heroes?

MH: Definitely. To me, villains aren’t evil. And, heroes aren’t good. They make the choice they make for a reason. What life throws at you and what shelters you from it is a huge influence on people. The three brothers that rule the Legion in Scythe have all been dealt a bad hand and each deals with it differently. All in their own special shade of darkness. The heroes in the Legion are trying to overcome that darkness but they struggle with the choices they made that got them Claimed in the first place. It also played a part in the Legion itself. When someone is Claimed, the antigen in their blood chooses their designation in the Legion that they will have for the rest of their life based on their personality. Who they truly are. So, they have to face and embrace this part of themselves or suffer the consequences.

NTK: This is an interesting view of good and evil. Less black and white. You’re dealing with shades of gray. Which brings me to the Paranormal Romance aspect. What makes your romance unique?

MH: It’s a blending of genres. Think paranormal romance meets Game of Thrones, in modern day Chicago with horror and suspense. Each book in the series is focused on two couples—a main and sub couple—whose storylines intertwine and influence the others. The world and plot of the Legion also impact the couples. It looks at struggles and hope in relationships, from couples to families, friends, and roles in society, as well as the society itself. 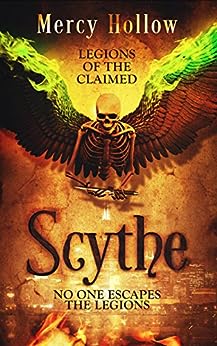 NTK: You’ve spoken of the choices which shape your characters. How much control do you have over them? Do you give your creations free will?

MH: Sometimes, I fool myself into thinking I have control over them. Then, they go and do something that ticks me off or they make a choice I want to yell at them for making. Or worse, I see their end coming for them and I can’t stop it. I spend a good amount of gray matter energy brainstorming and plotting, and finding character arcs but, at the end of the day, there are always surprises and places they take me. And, they always yell at me when I try to take them somewhere they wouldn’t go.

NTK: Do you enjoy psychological horror? What horror do you like to read?

MH: I do! From the classics like Frankenstein, Dracula, The Picture of Dorian Gray, to Misery, The Shining, The Handmaid’s Tale, Red Dragon, and Silence of the Lambs. I love reading about the fear of anticipation, the lengths people will go to or be pushed to, the tricks the mind plays, and how people adapt to or resist the extraordinary.

NTK: What horror films and TV shows do you enjoy?

MH: I liked the movies of the books I mentioned previously. I’m an Alfred Hitchcock fan. I liked the different take on characters in Penny Dreadful, Grimm, Game of Thrones, The Handmaid’s Tale series, The Leftovers, Black Mirror, Crazyhead. There are so many great ones. I love quirky and humorous horror as well.

NTK: Those are great shows and films. Which Hitchcock film is your favorite?

MH: Psycho, of course. But, I also really like The Birds, Rear Window, Rope, Vertigo, Strangers on a Train, To Catch a Thief. He had a great way with anticipation, getting the mind to react to things it didn’t see or fear things it projected it would see.

NTK: Do you think werewolves, vampires, and other monsters are psychological representations of the human psyche?

MH: I think we all have a little monster in us that could be drawn out in the right or wrong situation. Monsters represent our desires and fears. Our darkest moments. Our possibilities. They can be vulnerable and raw and passionate in ways people often don’t let themselves be.

NTK: Do you have a favorite monster?

MH: I have a soft spot for Frankenstein. He’s innocent yet brutal, lost but discovered. He’s weakness and strength. His life is complex, but he longs for the most basic human need—belonging and companionship.

MH: Cursing people to get exactly what they want and it bringing them great misfortune and ruin. I do like psychological torture.

NTK: Mercy, what does the future hold for you? What books or stories do we have to look forward to?

MH: Grim, the next book in the Legions of the Claimed series, comes out next month. I’m currently working on book three, entitled—Vegan. I’m also working on several young adult fantasy novels. I’m a freelance editor specializing in fantasy, paranormal, horror, sci-fi, and run workshops at conferences. I love getting to work with other writers and assisting them in getting their stories out for people to enjoy.

NTK: Thank you for chatting with me, Mercy. It’s been a pleasure.

MH: Thank you and HorrorAddicts.net for having me on and giving me the good fortune of being Cursed.