I’ve been taking life a little bit too seriously and I need to lighten up for sure. Last night my hubby and I laughed our fool heads off when he googled “Photoshop mistakes.”

Photoshop, in the hands of a careless/tired/overworked designer, can yield unimaginable horrors that would make even H.P. Lovecraft shudder. Whether it’s disembodied hands that appear out of other dimensions to grope unwitting victims or malproportioned or missing limbs, Photoshop can render chillingly innocuous images that, like a good horror story, reveal evil in its unabashed glory.

Analagous to horror stories, there is a moral. These weird aberrations make you acutely aware that nobody looks like a magazine in real life, and if they do maintain the visage of a covershot beyond that brief window of ten to fifteen years of youthful vibrancy, it is only achieved via the most brutal regimes of surgery, Botox, semi-starvation, and exercise.

Which brings us to Exhibit A.

HANDS FROM BEYOND THE GRAVE

She’s lovely, she’s nude, she’s blond, and SHE’S MISSING A FINGER!!! Was there a renegade piranha in the toxic florescent Popsicle blue sea so artlessly layered into the background?

I didnt’ know Thing from Addams Family and Jessica Simpson had any parts together, yet here he is! The plot: An innocent day of fun at the beach. She may have thought that itchy creepy feeling was sand in her hair . . . just think of the shock when she realizes that her dead ex-boyfriend’s amputated hand is getting ever closer to her neck!

This one is unbelievably scary. It’s not just the fact that she looks like an anorexic bondage queen who needs a veggie cheeseburger STAT before her tight hairstyle induces fainting, but there seems to be a deformed hand growing from her thighs!!! Rosemary’s Baby, year 2050. Aaaaagh!!! This one seriously gave me the dry heaves.

Proving that the evil fashion corporate marketing empire deliberately creates in all females (and males vicariously) a deliberate chronic infection of body dysmorphia, we have some horrific portrayals of the skeletal feminine “ideal” gone terribly wrong.

When Scarlet O’Hara bemoaned the loss of her 18 inch waist in Gone With the Wind, I don’t think her visions of nostalgia went this far. If the dark-haired lovechild of Gumby and a Raquel Welch recently escaped from a concentration camp and accidentally tripped over an electrical cord and landed belly up on the guitar amplifier, this is what you would get.

True confessions: I despise the Ralph Lauren brand. They openly perpetuate an anorexic, snobbish, unattainable, creepy, dated WASP stereotype. This model is not this emaciated in real life. This is what happens when you let a recent escapee from the binge/purge unit of the psych ward loose on Photoshop’s Liquify filter. I do NOT want to know what was going on in this Photoshopper’s sick, tortured head.

Speaking of tortured heads, let’s get to the grand finale, shall we?

EXHIBIT C: DUDE, WHAT HAPPENED TO YOUR FACE?

The only thing that’s scarier than Eminem is the fact that our society has made him into the successful bankroll he is. Kind of says something about how we really feel about racism and misogyny, don’t it? Yeah I’m getting too deep for this blog.

If the Incredible Hulk had too much coffee after getting his eyes dilated at the optometrist and then accidentally got trapped for several days under a radioactive tanning lamp, you’d get this picture: 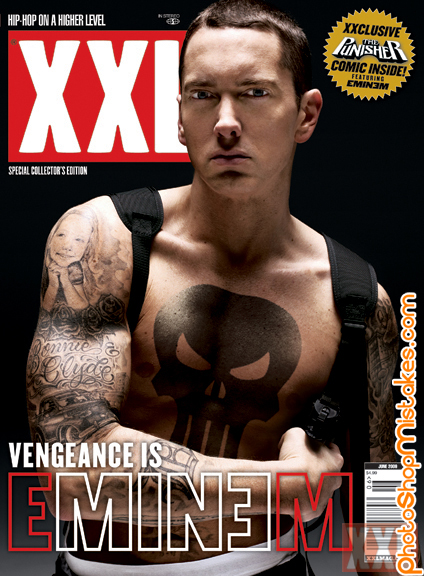 It has been said that you either love or hate Madonna. I think this designer hated her, even though he may not have known it at the time, as in subconsciously. Her forehead is so short that she appears to have suffered a terrible head-shrinking disease. I actually saw this mag cover in a Borders. It was nightmarishly scary.

Absolutely. Terrifying. When you see this image, first you will wish fervently that you hadn’t. The second thought you will have, if you are a kind-hearted person, is that you hope for the model’s sake that she does not look like this picture in any way. If Jim Carrey from the Grinch, Jack Nicholson from Batman, and Goldilocks were amalgamated in a scientific experiment gone horribly wrong . . .