Children of the Grave by Alex S. Johnson 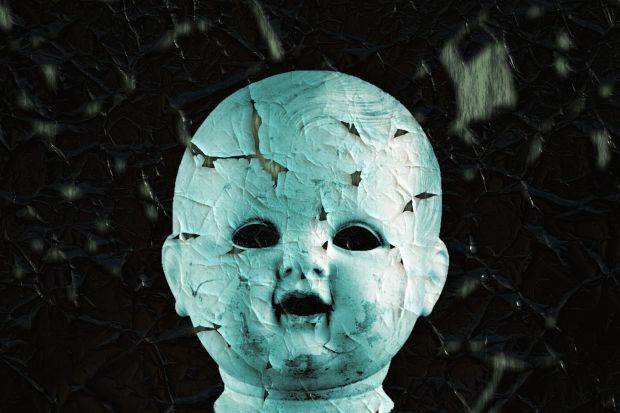 They tramped back from tomorrow into today, born aloft drops from a blinding sun, on rifle-cracks of wind, in the pits of black stars.

They came from cracked temples where sacrifice never slept, where green, mossy things little different from rocks formed long steps that writhed at night and died by day. They were the tomb-children, the beings of dark fancy evoked by witch-candle. Their eyes crawled with scorpion ghosts and they lived inside the cells of men, citizens of present time, flesh slowly unwound like a shroud.

By the churchyard they gathered, among the toppled granite crosses, faces stained with holy light. The priest who kept watch fingered his rosary and gazed up at the body of the Savior, who seemed powerless to do more than watch.

Once potential, hosts of golden wonders, deprived of air and succor, food and care, the bodies of the children faded away; but not their spirits. These took longer to disappear, to scorch emblems into walls and fences and even beneath the curious, quaint faces of the villagers, whom time had forgotten, who moved in a shrouded dream, scratched like the emulsion of black and white movies.

They drifted down from space in ships like glass coffins, wielding signs of peace in one hand and destruction in the other.

Deep in the earth, their shadows echoed with them, the bones waiting, quiescent, for a chance to hatch. And surfacing, ripening in the moist night air.

And they gave the bones blood. Not theirs, of course, since every final drop had been purged from their bodies; as they churned and chafed in shackles, crying out to no avail. Because their hurt went unheeded, crafted by the adults in whose power they remained locked.

The crimson nourishment they gave came from their hosts: the fiends of their fathers, the madcap jesters who amused themselves by crippling children. Those who had forged their death like pyramids, laying on brick upon another until the kids were lost, smashed under rock. Blind and dead, but their eyes still burned, and sometimes, late at night, the villagers saw them, peering out through the trees, or on the edge of the lake, or in subtler forms that flashed gently by as they tried to sleep. The bodies of the scorpions growing larger, until nothing could be seen of their once-innocent regard but cosmic blackness.

They left signs of their presence, diary entries of their wanderings discovered later in the crypts beneath the town, where shameful deeds had been done. Blood graffiti, cryptic feathers, semi-liquid offerings of flesh. They dropped hints, whispers in the ears of apple-cheeked old women, young, hearty men, hints of a coming nightmare. They wrote in curvilinear script, in hieroglyphs, in tongues of honeyed mist. Sometimes they chuckled from haybales as the harvest proceeded; sometimes they were only felt, as an absence, a sudden darkening, a sketch of terrible things that might yet be.

And the screams of the villagers rang among the hills, only to be stifled as the candles were snuffed, the mouths closed, the stitches lashed through the soft skin of eyelids. Their animals ran loose and free, especially the cats, who meowed in sympathy with the children. They understood the pain as only creatures with the wild in their veins could understand it. And they joined in the games, sometimes playful, sometimes cruel, the kids crafted from suffering and flesh and bodies and bone and hurt.

When they were done, giggling with glee that shaded into evil, they ascended once again, the tracks of the coffins etched briefly into the dark, as the wind shrieked and a storm gathered.

Only to be remembered as stories, legends, tales told by the fireside to the children of the grave.