What’s Your Jam? By Michael Fassbender

Recently, I was browsing on Stuart Conover’s site, The Horror Tree, and I saw an interview with a publisher who got his start with a Punk magazine. While he’s branched out to the realm of fiction, the punk sensibility has never left him. Indeed, “punk” is the second adjective in the list of qualities he’s looking for in prospective stories. For those who have been a part of that scene, the punk sensibility remains an enduring part of their character.

It’s a sensibility that resonates with many writers, as attested by the gamut of subgenres from Splatterpunk to Steampunk. It’s not one that resonates with me, however. I identify with a competing scene, Heavy Metal, and have done since I was in high school. Superficially, there are certain similarities: music that is played loud and features distorted guitars, and wardrobes that boast a lot of black T-shirts, but there aren’t too many common threads beyond these.

As art forms, Punk and Metal are created very differently. In Punk, the medium is secondary to the message, and Punk Rock songs tend to be fast, energetic, and haphazard. The band is reminding you that they don’t take anything seriously, including themselves and their music. Metal bands are quite different; they may take nothing else in the world seriously, but they are fiercely earnest in their dedication to their craft. They are perfectionists in their technique, and for those unfamiliar with the genre, surprisingly sophisticated in their composition. Much of the Metal scene has been converging with classical music at least since Randy Rhoads recorded “Blizzard of Ozz” with Ozzy Osbourne in the early eighties. Doubters are urged to listen to string quartet or piano arrangements of Metal songs, such as Apocalyptica’s first two albums.

Both genres relish horror imagery. It just manifests itself differently. Punk horror art takes on a pop culture veneer, almost an Andy Warhol approach. Metal horror art favors the look of medieval woodcuts, Hieronymous Bosch paintings and Grand Guignol-style performance stills. Contrast the imagery of The Misfits and Mercyful Fate, and you’ll see what I mean. Each of these bands exemplifies the horror aesthetics of its team.

We generally don’t hear about a Metal sensibility in horror fiction. We don’t have Occultmetal or Possessionmetal subgenres in the community, but upon examination of my own habits as a writer, I see common threads with the musicians I champion. I share their perfectionist tendencies in terms of technique. Typos and faulty grammar vex me, unless they’re meant to appear in the story as a function of characterization. I was mortified recently when I discovered a continuity error in a story that had reached the final proofing stage. For the most part, I like to think that my stories are in good editorial shape when I present them to editors. Whether or not they resonate with the editor is another matter entirely.

It’s not just about the technique, either. I do take myself and my art seriously. I’d rather give my readers the chills than make them laugh — or score points in an imaginary debate. In terms of horror styles, I have a marked preference for supernatural horror, although this encompasses a number of subcategories, such as Lovecraftian, occult and mythological themes. The same preoccupations reign among many Metal acts, from Scandinavian Black Metal through retro acts like Blood Ceremony and Brimstone Coven. And in execution, I prefer to write my stories in earnest, not with irony. One annoyance I’ve had with the Lovecraftian community is the prevalence of tongue-in-cheek content. Overtly jokey stories and poems only serve to lighten the mood.

Metal and Punk are not the only musical in-groups with substantial linkage to horror. Goth is a third, and it carries its own sensibility to the same literary well. Of the three groups, the Goths probably feel the greatest affection for classic tropes like vampires and ghosts. The differences with Metal are more in the realm of nuance: Metalheads are more likely to present monsters as menacing, and Goths more as misunderstood. Goths are more likely to bask in the melancholy side of the spectrum, and Metalheads incline more to the macabre side. Nor should these three musical genres feel that they control horror imagery in music; other bands have swum the same waters, either intermittently or chronically. Stephen King is famous for interjecting his classic rock obsessions into his fiction.

Herein lies the significance of the exercise. Readers in general, and writers in particular, are likely to discern common threads in the literature that drives them, the films that excite them, and the music that drives them. While the linkage between books and movies is obvious, given the number of stories that came to the screen after success on the page, the relevance of musical taste can be just as significant, at least if the musical interest is a strong one. Horror writers can learn a great deal about themselves and what drives them if they stop to consider their musical tastes and examine their parallels in the fiction they love and the stories they produce.

Michael Fassbender is a part-time writer in the Chicago area. His story “Inmate” appeared in Sanitarium Magazine in 2016; “The Cold Girl” appeared in Hypnos Magazine in 2016 and has resurfaced in October 2019 in a volume entitled Re-Haunts. “But Together We Are Strong” has appeared in the February 2020 issue of Horror Magazine, “Miroir de Vaugnac” found its place in Dark Divinations on May Day, and “Schattenlenker’s Hidden Treasure” was revealed in The Nightside Codex in August. This Halloween, “Old Growth” began spreading in Scary Stuff. You can read about more of his work on his website, michaeltfassbender.com.

Hello HorrorAddicts, recently we had the pleasure to interview Cadaveria. They are best described as a Horror Metal band with a blend of Black, Death, and Gothic Metal.

How did the band Cadaveria come together?

I founded the band with drummer Marçelo Santos in 2001. The band represents a virtual space where we can freely express ourselves through music and visual arts, since we care also about the band image, artworks and music videos. In these 15 years we have released five full length albums and a double DVD. Recently we entered the studios with legendary thrash metal act Necrodeath to give life to Mondoscuro EP.

What did you do before Cadaveria ? 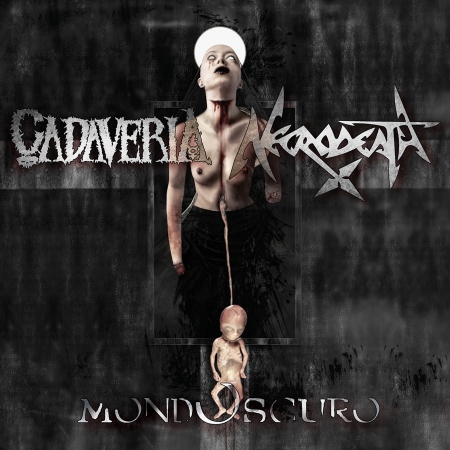 What bands influenced you?

I grew up listening to rock music and I discovered heavy metal in 1990. Mercyful Fate, Holy Moses, My Dying Bride and the old school Norwegian black metal were my first passions.

Everything can inspire me: my life, the experiences I do, people I meet, movies, art exhibitions, the book I read, the countries I visit. I write about my thoughts, my dreams and nightmares.

How would you best describe your music?

Our music is a strange mix of black metal, gothic metal with doom and death metal influences. After the release of our previous album entitled The Shadows’ Madame fans and critics started to label our style as horror metal, for the sinister and gloomy atmospheres evoked by our songs. Basically this definition means all and nothing, that’s why we like it and we chose it as the title of our fourth record. The truth is that we play what we like and feel without following any trend.

What is the creative process like when you write music?

The lyrics come quite spontaneously. I’m used to write down short phrases that come to my mind, sensations, my believes, my mental flow. Then I reorganize them in a proper lyric and I merge this with music. Guitarist Dick Laurent is the main responsible for creating the riffs. We work together to create the songs structure, then other band members add their own touch.

Could you tell us about your latest EP Mondoscuro?

Cadaveria and Necrodeath share two band members (Flegias, their vocalist is our drummer Marçelo Santos – GL is the bassist of both the bands, even if in Cadaveria he uses peter Dayton as nickname) and have been in close contact for many years. A cooperation between us was in our thoughts since long time but we never made it for one reason or another. Finally last year Marçelo Santos came up with the idea to release something together. In the beginning it was supposed to be a simple split, but while the production was going on we enriched the track list with two songs composed and played together and we also covered each other. Mondoscuro was released on September the 2nd on CD via Black Tears lavel; a vinyl edition will see the light by the end of this year via Sleaszy Rider records. The EP features six songs: Mater Tenebrarum (by Necrodeath) performed by Cadaveria (guesting Lindsay Schoolcraft from Cradle of Filth), Spell (one of our hits) covered by Necrodeath, two new tracks composed together (Dominion of Pain and Rise Above), Cadaveria’s cover of Christian Woman (Type O Negative) and Necrodeath’s cover of Helter Skelter (The Beatles). The EP title refers to the cinematographic genre “Mondo film” of explicit documentaries, born in the 60s and depicting sensational, bloody and shocking scenes. Mondoscuro also clearly recalls Mondocane project, the legendary collaboration of Necrodeath and Schizo from which the album “Mondocane: Project One” was born in 1989. As the explicit artwork suggests, Mondoscuro is meant as a unique chapter in the bands’ careers, a birth and a death at the same time. A release that will soon become a rarity and collectible for our fans.

Where can people find out more about Cadaveria?

These are our channels: