Horror Blackademic is a Real Thing

It seems surreal that I have the best job ever, writing, teaching, and speaking about horror as a creative, a fan, and an academic. I have a confession, though: I’m an accidental horror blackacademic.

Don’t get me wrong, I’ve always known I was a writer. I couldn’t not write. Ever. Stories haunted me day, night, and whatever falls in between. So that was a definite career goal. I’ve also always had the gift of gab. As a child, I wasn’t too sure that folks would pay me to talk, so I didn’t factor it into life planning. And I’d always been told I’m good at teaching people stuff. A stint in banking confirmed this, and for years, I was paid to be a corporate trainer. All other facets of my life included some type of teaching, so I embraced it on a small scale.

But then I met Dr. Kinitra Brooks. I’ll never forget that moment at World Horror Convention 2013 that had me moving through the halls of the Hotel Monteleone in New Orleans and running into another black woman, not a common sight at horror events I’ve attended. A thrill coursed through me as I saw that she was talking to someone at the time. I decided to just linger in the area until she was done. And then I felt a tap on my shoulder and I turned around to face a brilliant gaze and beautiful face. I was hooked.

If it sounds like a cheesy “love at first sight” kind of thing, that’s because it was exactly that for me. Over the course of the conference, we spent some time together. She did my make-up for the awards show…my face was BEAT! We had lunch together a couple of times during the conference and I was enamored of her. One of those lunches was with the ever fabulous Linda Addison and I struggled with that meal to not go all creepy fan girl on both of those amazing writers.

This chance meeting had an invaluable impact on my life. I was looking forward to receiving my graduate degree later that month. I came out of the Writing Popular Fiction program at Seton Hill University a much better writer. I also literally came out as a horror writer during my stint there. Having met Dr. Brooks gave me a focus for my academic career I hadn’t originally considered.

She and Linda Addison later contacted me about a project they were working on, an anthology of horror written by black, female writers. I was super excited to talk with them. One of the best edit suggestions I’ve ever received was when I expressed concern over the length of my short story and Ms. Addison basically told me, ”The story is as long as it needs to be.”

I now find Dr. Brooks’ research and writings to be the main anchor on which I base my own research work on the horror genre and black femininity. I’m now, proudly, an accidental horror blackademic.

R.J. Josephisa Texas based writer and professor who must exorcise the demons of her imagination so they don’t haunt her being. A life-long horror fan and writer of many things, she has recently discovered the joys of writing in the academic arena about two important aspects of her life: horror and black femininity. 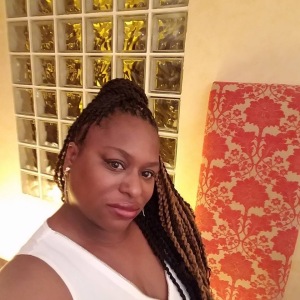 When R. J. isn’t writing, teaching, or reading voraciously, she can usually be found wrangling one or five of various sprouts and sproutlings from her blended family of 11…which also includes one husband and two furry babies.

R.J. can be found lurking (and occasionally even peeking out) on social media: