My Boyfriend is a Vampire 1-2 by Yu-Rang han 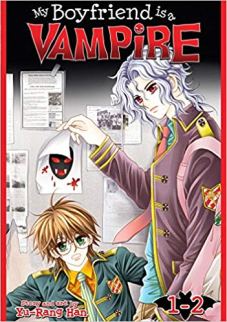 Technically, I wouldn’t really call this a horror book but I wanted to review it for you guys just in case you are looking for a horror manga and you happen to see this title.

There are alot of spoilers in this review, so if you would rather read it on your own and find out, please do so, otherwise let me tell you about this book.

I picked this book up because My Boyfriend is a Vampire sounds like a funny manga that might have horror in it and might be part love story. However, this book is not either of those things. First of all, the vampires don’t show up until two-thirds of the book is over. When they do show up, they don’t really present themselves as the normal vampire they’re more like thugs or a gang. Well, thugs dressed in schoolboy uniforms.

This story is really about Gene, a guy who is “pretty”  and keeps getting hit on by other guys because they think he’s a gal. When he finally gets sick of, it he starts beating up anybody who asks him out or thinks that he is a girl. He gets so famous by beating guys up that he becomes the leader of a gang. Soon, no one who knows of him will try to pick him up as a girl cuz they know his reputation is tough and he has a gang to back him up. Things are going pretty smoothly until one day, his gang tells them they need him to come help them because a new gang has moved into their hangout spot and they’re too strong for them to defeat. Knowing how many guys Gene has beat up because they thought he was a girl, they figure he can beat these guys up for good and get them to leave their territory.

On the same day when he’s supposed to go throw down some whoop-ass, the second-in-command of the gang asks him to pretend that he is his girlfriend because there’s a girl at school that just will not leave him alone and won’t take no for an answer. This leads Gene to be dressed like a girl when he first confronts the vampires. They all think he’s a girl. He tries to beat them up, but they are too tough for him.

One of the vampires is weak from battle and although they don’t usually drink human blood, his weakness drives him to drink from Gene. In this vampire mythos, people do not become vampires by drinking from them. Usually when a vampire drinks from humans, they die. When Gene wakes up from being bitten and he’s still alive, everyone kind of freaks out. What is he? What power resides inside him? Where did this strange boy who looks like a girl come from? But there’s one change that no one expects and that is when Gene “dies,” he wakes as a girl with all the essential girl bits.

It just so happens that the weak vampire who drank from Gene is one of the vampire leader’s sons who is trying to get his brother to stop killing innocent women. His brother is on the hunt for a wife and drinks from women to see if one of them may survive to be his bride, but none of them do.

While on the quest of trying to help the weak vampire to stop his evil brother, Gene “dies” a couple more times, but every single time he dies, he changes sex. If he’s a guy and he gets killed, he becomes a girl and visa versa. It’s unclear if he’s actually a vampire or not. At one point he does drink someone’s blood, but then someone kills him and he’s able to “die” and wake up a girl again, so it is pretty confusing on the mythos part.

What I did find what I did find amusing was that when Gene dies the first time, there’s sort of a flashback sequence where his mother is holding him as a baby and she says,

“For as long as certain foretold events do not unfold, you will live your days as a normal healthy boy, but if the fates conspire against you and tragedy is to strike, the life you’ve known will cease and you will begin life anew as a girl. That path will prove to be a difficult one, my darling. If it were up to me, I would choose for the peaceful life for you, but it is not up to me. It is your life and the choice is yours to make. My child, please do not get bitten by a vampire, I beg you.”

Now, how getting bitten by a vampire his his choice to either die or live is beyond me. The vampire bites him, plain and simple. It’s very odd. It reminds me of a non-horror movie called Zerophilia* where people are born with two sexes in their DNA and change every time they have sex.  It’s a niche topic, and one that no everyone is comfortable with, so be warned if you are bothered by this, you probably won’t like this book.

Overall the story was okay if you like manga in general and are not simply searching for the horror. The art is good and it’s sorta fun, but if you’re looking for a fear factor here, you won’t find it.

*Zerophilia incidentally stars our favorite vampire “Henry” from Blood Ties, Kyle Schmid, and is worth the watch if you have the interest.