A fantastic experience of violence and pitch black humour, Inbred is distinctly British and distinctly Alex Chandon. It has been ten years since Chandon directed Cradle Of Fear, and the nightmarish quality of that 2001 cult favourite has been retained in Inbred and fortified with a more consistent cast and superior production values.

The director’s latest offering to the horror genre pitches a group of troubled teens and their youth workers against a freak show ensemble of murderous villagers in rural Yorkshire. A trip to the local pub on their first night introduces the locals and sounds the warning that all might not be well – and are those really pork scratchings? From here fortune swiftly plummets for the unfortunate gang as they are exposed to bizarre and sadistic local customs which would make the inhabitants of “Summer Isle” seem welcoming. 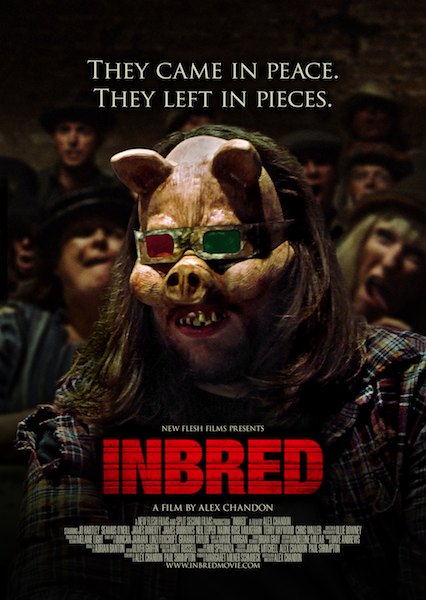 The acting in Inbred is solid throughout, and the cast had clearly been selected to give the correct feel for a film which is designed to function as an effective horror movie (which it does) whilst not asking its audience to take it too seriously. Jo Hartley and James Doherty as the group leaders perform particularly well together: he the overly liberal youth worker trying to relate to the kids but failing miserably, and she the harder-nosed realist who coaxes tentative friendships from them. Their dynamic aided the younger actor’s interactions and provided humour and characters which were easy to identify with.

It was interesting to see a quintessentially American horror subgenre (out-of-towners entering the isolated domain of murderous hillbillies; see Wrong Turn et al) transposed into the English countryside. It was done well and took the correct tone to avoid the potential pitfalls: principally the scale of the landscape and likely proximity to civilisation, which could have been problematic. The humour allowed the viewer to suspend disbelief further than in a straight piece, but it was never allowed to become a slapstick farce – the balance was well struck.

As with Cradle Of Fear the physical effects were extremely well executed. True horror aficionados love practical effects, and with a plethora of gore including slit throats and blown-up heads, genre fans will find themselves roaring with approval once the action gets started. If CGI was used, it was done so sparingly and effectively.

Inbred does not simply provide the set-up and then unleash horrors upon its victims; instead a surreal community and its unique brand of underground entertainment is fleshed out before the carnage begins. If you’ve ever been to a tiny, isolated, village and wondered “what do they do for fun here?” – Inbred takes that thought and then brutally murders it in front of a cheering crowd by way of an answer.

Gratifyingly, directorial courage was not lost at the conclusion of Inbred. The violent attrition between the opposite sides of the rural divide was bloody and fun. The ending satisfyingly concluded the film in the tone it deserved – you wouldn’t expect all the protagonists walking off into the sunset together, but neither are we ambushed with an Eden Lake style buzz kill. Again the tone and balance were well crafted.

Sometimes the success and failure of a movie is not entirely down to the filmmakers, but the audience too. Watching Inbred for an in-depth exposition on rural life in modern Yorkshire would be a bit like watching Carry On Doctor for an insight into the workings of the NHS in the 1960’s. With grass roots horror at its black heart and a sick sense of humour, Inbred entertains from start to finish and will put an evil smile on your face. Hopefully Alex Chandon won’t leave horror fans waiting another decade before returning to the director’s chair.

The World Premier of British horror director ALEX CHANDON’s new movie INBRED will be taking place at the famous London Empire Theatre during this months Frightfest 2011. The screening is taking place at 18:30 on August 29th 2011, and has so far sold more seats than any other film.

Ahead of this, Alex has sent us an as-yet unreleased poster for HORROR ADDICTS to see before anyone else. Enjoy!

HORROR ADDICTS will be attending the Premier, and will let you know if INBRED is as good as it looks!