Disturbing Assembled Footage Film “Infliction” to be released on DVD, VOD, & Digital HD on Tuesday July 1st in the U.S. and Canada by Virgil Films & Entertainment 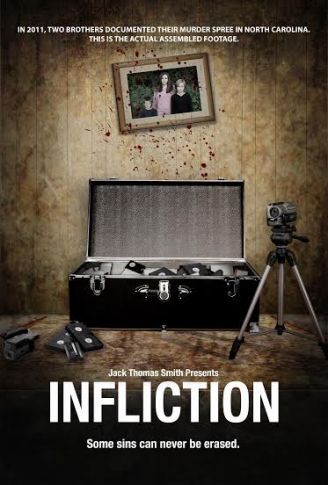 NEW YORK, NY (June 17, 2014) – Virgil Films & Entertainment announces the upcoming DVD, VOD, and Digital HD release of the controversial film “Infliction” on Tuesday July 1st, 2014 in the U.S. and Canada. Produced and directed by award-winning filmmaker Jack Thomas Smith, whose last feature film “Disorder” was released by Universal/Vivendi and Warner Brothers, “Infliction” is a dark and disturbing assembled footage film that documents two brothers’ 2011 murder spree in NC and the horrific truth behind their actions.

“Working on ‘Infliction’ left me troubled and haunted,” says Jack Thomas Smith. “It left me thinking about people’s actions or lack thereof and the inevitable domino effect. We all walk our own path in life, which shapes and defines us. What happens to us today, good or bad, will affect generations to come.”

Earlier this year, “Infliction” opened in select theaters across the country. Additional screenings have been scheduled this summer and fall due to demand in Washington, NJ; Pittsburgh, PA; NYC; Gettysburg, PA; and the Chiller Theatre Expo in Parsippany, NJ.

For more information go to www.inflictiontapes.com.

Jack Thomas Smith made his feature film-directing debut with the
psychological thriller “Disorder.” He was also the writer and producer of that
film. “Disorder” was released on DVD by Universal/Vivendi and New Light
Entertainment. It was released on Pay-Per-View and Video-On-Demand by
Warner Brothers. Overseas, it screened at the Cannes Film Festival and the
Raindance Film Festival in London. Curb Entertainment represented
“Disorder” for foreign sales and secured distribution deals around the world.

Born in 1969 in Philadelphia, Pennsylvania, Smith lived there until he was
eight when his family relocated to a quiet island community in Michigan,
which would later serve as the inspiration for his upcoming film “In the
Dark.” He began to write at a very young age after reading the Stephen King
novels “Salem’s Lot” and “The Shining.” By the time he was eleven, he had
written a 300-page novel and a number of short stories.

Smith’s family moved to Sparta, New Jersey when he was a teenager. It was there in that middle-class town that
he discovered the films of George A. Romero, Stanley Kubrick, Brian DePalma, and John Carpenter. Inspired
to make movies, he wrote and directed a handful of short films that were shot on Super 8mm and starred his
brother and friends in all of the roles.

As a young adult, Smith produced films for noted horror directors Ted Bohus and John Russo, co-creator of “Night
of the Living Dead.” From that point on, it was only a matter of time for his growth as a filmmaker to expand.
Smith’s current project he calls “Infliction” is a dark and disturbing assembled footage film that documents two
brothers’ 2011 murder spree in NC and the horrific truth behind their actions.
Smith’s production company, Fox Trail Productions, Inc., is currently developing the action/horror film “In the Dark”,
the drama “Illegals”, and the comedy “Ties that Bind.”