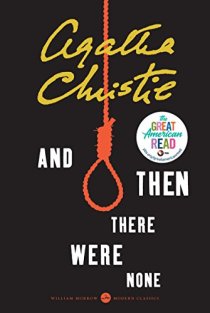 Agatha Christie probably isn’t a name you’d associate with horror. She was a crime author; the writer you snuggled up in the armchair with on a rainy afternoon for a good thriller with twists and turns. For the first two decades of her career, the famous detective with the little grey cells, Hercule Poirot, was her livelihood. And yet, in 1939, she unleashes And Then There Were None. This single novel redefined strategic, rhythmic, multiple murders in fiction and would come to change horror itself.

On the documentary The Thing: Terror Takes Shape, John Carpenter cites Christie’s novel as an influence on his adaptation of Campbell’s novella Who Goes There?. In the novella, dozens of scientists find an alien imitator in their midst which is ultimately defeated with only a few deaths. Carpenter’s The Thing is much bleaker, with just sixteen men left to fight and kill, and ultimately are left with two survivors and an uncertain future, desolate and alone.

Strangely, though a larger crowd might sound initially scarier, as they could be so many people, it is when there are fewer characters that the tension mounts. The walls have closed in. There aren’t seven rooms that a killer could be in; there’s only one. And, standing in the right place, you can be sure to see them. Carpenter reduces a few dozen characters to his sixteen, and Dame Christie had already done it with just ten.

Everything about the novel has the purpose of constricting the ten, subjecting them to as much pressure as possible, crushing them. The house is cut off from the rest of the world and those on the mainland have been told not to rescue them. We’re confined to the hallways of Soldier Island’s house, chasing shadows.

Added to this the dripping theme of guilt that Christie presents us with, permeating every sentence, every word of the novel, and we see that she is pressurizing the characters emotionally. The past catching up with them; they can’t escape the killer or their conscience.

But I’m not here to discuss the novel as a whole. What I want to bring to your attention is the legacy of its setup. Just look to The Melancholy of Haruhi Suzumiya. Though light-hearted, there are two episodes of the first series in which the S.O.S brigade are trapped on an island with a single house, in a storm, when a murder takes place. Suddenly everyone begins casting suspicions, doors are kept locked, shadows are seen outside. Though there is only a single murder, as opposed to the many in Christie’s novel, the setup is so similar it borders on parody.

To go even further, die-hard fans of horror-thrillers will remember the series Umineko no naku koro ni, or When The Seagulls Cry. Twenty people on an island in a storm being killed off systematically to appease an old legend. This direct homage is done not just because it’s a nice reference, but because the formula is so easy, simple, and effective. No communication to the outside world, trapped in one place, being killed off by a psychopath in the midst.

This claustrophobic killing rhythm has been replicated so many times now that it’s hard to think that it had an origin of some kind. And there were stories that used aspects of it before And Then There Were None, but none of them had the same impact.

Could you conceive of the modern slasher flick without some of the points mentioned? Could you imagine Alien if it was in a city with a nuke nearby? If the bridge in The Evil Dead were intact? Perhaps Saw II would be better if only two people died in that house? Maybe if the police didn’t keep them caged in the apartment, REC would have been vastly improved?

If you want maximum terror, you keep people confined. This isn’t just a claustrophobia thing; it’s the idea of escape. Freedom. You find what a character wants, and then take it away from them; it’s storytelling 101. In Scream, Sidney says that horror movies are just girls that ‘run up the stairs when they should be running out the front door, it’s insulting.’ But when the front door opens up to a cliff-face or the vacuum of space, there’s no option. We’re trapped. We are creatures constantly in need of control, and when we don’t have control of escape possibilities, we panic. We get scared.

Christie got the formula and nailed it. It hasn’t been beaten since. It’s the reason why The Mousetrap is the longest continuously-showing production of all time. It’s why Waters of Mars was one of the most terrifying episodes of Doctor Who in recent memory. It’s because it taps into our basic instincts and then removes them. We can’t fight and we can’t run. We can only try to survive and hope and pray. And anyway, as Leslie Vernon says, letting people escape ‘is really embarrassing.’ These killers aren’t going to let us off the island.

And Then There Were None is the perfect slasher prototype and should be revered and remembered as such. Agatha Christie wrote the essential horror blueprint. Fact.

Christie, A., 2015. And Then There Were None. London: HarperCollins.