John Carpenter’s In The Mouth Of Madness was released in 1994, and completes his ‘Apocalypse Trilogy’, along with The Thing and Prince of Darkness. Drawing heavily on H. P. Lovecraft, Mouth of Madness is a unique, self-reflexive film in a similar vein to Wes Craven’s New Nightmare (also 1994). The film follows insurance investigator John Trent, as he tracks down missing horror novelist, Sutter Cane. This article will focus on film’s use of fiction and stories to blur previously thought-of binary oppositions, such as fantasy/reality, human/inhuman, and even day/night, to try and disturb and unsettle the viewer. 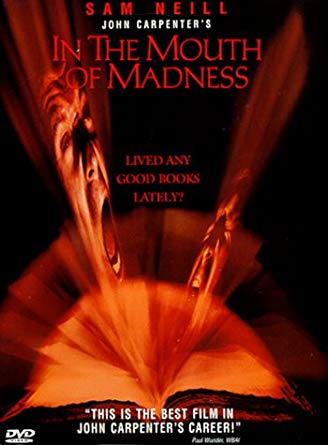 The idea behind fiction in Mouth of Madness is, if enough people believe in stories, the stories gain power, and through that power the Old Ones can return. Cane explains this to Trent like this:

“It takes its power from new readers and new believers. That’s the point. Belief! When people begin to lose their ability to know the difference between fantasy and reality the old ones can begin their journey back. The more people who believe the faster the journey. And with the way the other books have sold, this one is bound to be very popular.”

In Paul Cobley’s book Narrative, he states that “The most familiar, most primitive, most ancient and seemingly straightforward of stories reveal depths that we might have hitherto failed to anticipate.” (Cobley, 2001, p. 2). Cane, controlled by the Old Ones, uses horror fiction as a universal storytelling medium to connect with readers on a primal level, using common tropes and ideas to make it easier for readers to believe. Cobley’s discussion of signs in literature, or “what humans interpret as signs, therefore stand in for something else in the real world” (p. 9), illuminates why a horror writer is the best medium for the Old Ones to use to prepare humanity for their arrival. Coding themselves with signs they people understand makes them more believable, understandable, acceptable, even.

Fiction, therefore, is an illumination of truth, a coded way to our understanding of knowledge. With this in mind, the filmmakers use the audience’s understanding of this concept (though perhaps the audience isn’t consciously aware of it) to turn truth on its head and destabilise them. Slowly, picking up pace at the finale, the boundary between fantasy and reality erodes away.

This happens in many ways, from Cane’s whispering “Did I ever tell you my favourite colour was blue?” followed by Trent waking up with the world blue, to the constant cyclist returning over and over again. There are also more subtle details which hint the fictional nature of Trent’s story. The room Trent stays in at Pickman’s Hotel is 9, the same cell number that Trent is in at the asylum. Similarly, the number of the motel room Trent stays in after his world has been turned ‘upside down’, is 6. 6 is also the number of novels that Sutter Cane has written before In The Mouth Of Madness.

Note that the world Cane inhabits is malleable, and reflects, is, his fiction. “You are what I write. Like this town. It wasn’t here before I wrote it. And neither were you.” He later writes Trent’s actions perfectly, the passage that Linda reads from the novel. Cane alters what is real and not real because he lives inside his own fiction, an avatar, for his real self. This is made evident when Trent explains to Harglow that the reason he doesn’t remember Linda is “Well, that’s easy, she was written out.” He is a proxy god for the Old Ones.

The breakdown of reality and fantasy is not the only division that collapses. French structuralist Claude Levi-Strauss theorised that stories were, at their core, thematically comprised sets of binary oppositions, such as good and evil, rural and urban, men and women. Carpenter’s film systematically deconstructs this simple division and thereby prove the illusory nature of Trent’s reality and, to an extent, our own, assisting our discomfort.

Reality and fantasy is a clear example; the whole narrative is a deconstruction of its fictional self, but another is the opposition of human and inhuman. Several times we see characters (such as Mrs. Pickman) change to monsters throughout the film, and others such as Linda have the ability to move from human to inhuman. The anthropomorphic qualities attached to monstrous forms unsettles us, we should be allowed to remain clean and whole, but also the monstrous elements given to humans is just as disturbing. Even the painting at the hotel morphs throughout the film. Paintings themselves lie between truth and fiction, a definite image but a representation only, a topic Andre Bazin discusses in The Ontology of the Photographic Image (pdf link below). This distortion brings several oppositions into question in one broad stroke. Carpenter knew what he was doing.

Additionally, that even Cane has a monstrous form on the back of his head, is a startling revelation. When Cane was completely human (though one controlled by other beings), it was still essentially human, and so defeatable. If Carpenter were to show that Cane was an Old One, we would be more comfortable with even this; he would fall on one side of the human vs inhuman opposition. However it is in the middle, a blurred, distorted place we can’t understand, which is more frightening than his being either side.

A smaller example is day and night. Several times throughout the film, such as the arrival at Hobbs’ End, the film jumps straight from night to day. The editing that would usually show a passage of time is inverted, breaking even filmmaking conventions. Here, no time has passed at all. Time is breaking down, the regular cycle of solar bodies that extends beyond this world, is collapsing.

Literary theory states that our understanding of reality is dictated by language, that we experience the world through words and the connections between them. We know a door is a door, in any shape or size, because we associate it with the word ‘door’; the word is what tells us two doors are similar. As Bennett and Royle discuss, “We cannot in any meaningful way, escape the fact that we are subject to language.” (Bennett & Royle, 2009, p. 131). Carpenter’s film is a perfect exploration of the ways in which we are subject to words, to fiction and stories, and the confusion and discomfort if this were to be consciously manipulated by a malevolent force, dissolving oppositions and boundaries we expect and have built into our world, into language itself. The film is not about the destruction of the world, but a destruction of a human perception of the world.

Bazin, A., 2007. The Ontology of the Photographic Image. [Online]
Available at: http://faculty.georgetown.edu/irvinem/theory/Bazin-Ontology-Photographic-Image.pdf
[Accessed 08 08 2018].

No, no, no, not THAT March Madness!

Madness, insanity, craziness (the bad kind) is still very much a taboo in polite society.  We haven’t <quite> medicated it completely away yet, so it is something still misunderstood and feared in the real world, fair game to be used as one of the seeds of fear that are often at the heart of a good creepy story, a haunting piece of music or hidden in the brushstrokes waiting for an artist’s vision to set it free.

BUT…When we think about madness in a blog by Horror fans to amuse OTHER Horror fans, maybe the current sober and modern terms just simply do not apply.
We are in it for the thrills after all…right? RIGHT!! So give your political correctness a lovely sleeping pill and come revel and indulge with us in a little playful MADNESS this month!

Mad Scientists lurking in their labs, creating creatures or even maybe transforming themselves?
Mad Tea Parties with magical creatures?
Mad killers afoot under the Spring Moon?
Madwomen locked up and lurking in the attic?
Mad Girls escaping from Asylums?
Mad dogs slavering under the porch?

…and also exposing oneself to the light of the moon.

All of these and more will be fair game this month, from sneak-peeks at films to favorite characters listed and accounted for, and of course always the stories rounded up to be told and re-told in hushed tones by candlelight…
After all, who doesn’t fear madness at least a little…and what we fear, we imagine, and whisper about, even if just in our minds. For those afflicted with the Writing Plague, Madness seems to often conveniently be just around the corner in many instances of  horror literature and film screenplays.

I’ll be lurking in the wings to flit out and taunt you with a few terrifying tidbits I’ve gathered up to titillate you as we wind up to begin our pod-casting season, so stick around and go beautifully MAD with us this month! We’ll have such fun!