I haven’t read a lot of comics over the last few years but recently I found myself wondering what good horror comics are out there? It didn’t take to long to find an indie horror comic publisher that’s putting out quality horror comics and graphic novels. Scary Tales Publishing is run by Kevin M. Glover and produces comic anthologies that are a throwback to the black and white horror comics of yesteryear, such as Tales From The Crypt and The Vault Of Horror.

The comic I read from Scary Tales Publishing was Monster Smash-Ups Issue 1. 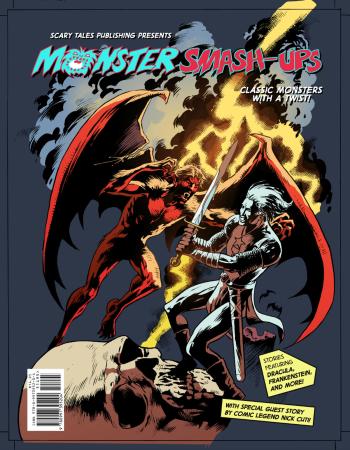 This book contains 40 pages and 6 stories of monster mash-ups. Some of the things that you will see if you pick up this anthology is astronauts on a strange planet trying to escape a space monster, Dracula versus an Arthurian knight, a horde of mummies, a swamp monster fighting zombies and a diary written by Anne Frankenstein. If you love monsters then you can’t pass this up.

Every story in this book was good but the one story that really stood out for me was The Diary Of Anne Frankenstein. The year is 1887 and young Anne Frankenstein is hiding in an attic as the angry villagers are going through town killing all the creatures of the night and throwing them in a pit. Anne may be a child but she has skills and the villagers will be sorry they messed with her. This story is an obvious nod to  The Diary Of Anne Frank and looks at intolerance in a fun way. I would love to see a series based on this story.

Monster smash-Ups is a lot of fun and a must have for horror fans. It takes me back to a time when I liked to sit in my room with my friends looking through horror comics and saying how cool the monsters in it were. I got a great sense of nostalgia while reading this book. You can tell that the artists and writers who put Monster Smash-Ups together have a true love of the genre. Great art, a sense of humor and fun story-lines. This is everything a horror comic should be.

Many explorers have died in the Amazon and their bodies were never found. The jungle has been called the Green Hell and its a vicious uncaring place full of predators of different shapes and sizes. But this fact doesn’t seem to stop thrill seekers and tourists from visiting the jungle. Ben and his friends are about to take the trip of their lifetime into the untamed jungle.

What starts off as a wondrous trip into a beautiful part of the world, quickly becomes a fight for survival. On their way to a campground their boat captain is murdered and the tourists are stuck in a remote location where no one can find them. Now they have to make their way back to lodge they came from while being stalked by something that wont let them leave the Amazon alive.

Pray For Darkness by James Michael Rice is a horror novel where the jungle itself is the main character. In the beginning its described as a beautiful place with exotic animals, luscious fruit and it has everything you would need to live off the land. Later in the book we see it as the ultimate killer that can end your life in a thousand different ways leaving your body where it will never be found.

The jungle is a living, breathing dangerous thing in Pray For Darkness and that’s what made this book great. One of my favorite scenes in this book didn’t include any people but instead focused on animals struggling to survive in the wild. The chapter starts with a family of capybaras being stalked by a jaguar. The author gets into the heads of the animals and you see how hard it is for them to thrive in this place. I found myself feeling emotion for the capybara trying to save its family and the starving jaguar just trying to survive.  Then the scene gets more horrifying when a group of bigger predators arrive.

The predators in question could be considered zombies but in my opinion they are faster, smarter and more vicious than zombies. There is one scene when one of the characters is turned into a zombie like creatures that is downright chilling. This is when the book changes from being about the beauty of the amazon to a horror novel. I also loved how we see the character’s personalities change when they are confronted with danger. You could say this book is two books in one.

The thing I didn’t like about Pray For Darkness was that it took a long time to get into the action. The first half of the story focuses on the characters which I didn’t find interesting. The book picks up in the second half though when we find out about the wild humanoids that are stalking the campers. My favorite part of this book was the descriptions of the jungle and I would have liked this book even if it didn’t have any characters. This book brings to life an exotic location that I have never experienced and that was what made it worth reading.

Early explorers called it the Green Hell, and for good reason. Consisting of more than a billion acres of untamed wilderness, the Amazon is a place of fragile beauty… and unspeakable danger.

When Ben Sawyer and his friends embark on an adventure tour in a remote section of the jungle, they plan on having the trip of a lifetime. But when their riverboat captain is murdered, leaving them stranded, their dream vacation rapidly tailspins into a nightmarish battle for survival.

Something sinister has been watching them, stalking them under cover of darkness.

Something that will not allow them to leave the jungle alive…

Pray for Darkness is the story of three twenty-something year old friends—Ben, Auggie, and Cooper—who head to the Amazon in the hope of creating some lasting memories before they are completely saddled by the drudgery of everyday life. Once there, they arrive at a rustic jungle lodge, populated by tourists hailing from around the world, and are immediately entranced by the fragile beauty of the forest and its creatures. However, it does not take long for their wanderlust to kick in, and they decide to up the stakes by venturing even deeper into the jungle to spend a few days at a remote campsite.

Under the watchful eye of their native guide, Ernesto, they abandon the relative safety of the tourist lodge and head to the remote camp in search of a “true” adventure. But when their riverboat captain is murdered and their boat disappears, their dream vacation quickly becomes a real life nightmare. Now they must brave the dangers of the wild as they make their way back to civilization.

And they are not alone.

A tribe of hungry corpses has detected the presence of the human intruders, stalking them under cover of darkness. Now Ben and his friends must use every resource at their disposal in order to survive the journey back to safety.

In his new novel, Pray for Darkness, author James Michael Rice draws from a wealth of personal experience while writing about an ill-fated adventure trip into the Amazon.

While developing ideas for his novel, Rice journeyed deep into the Amazon not once, but twice, in order to experience the jungle and all of its glorious (and potentially lethal) flora and fauna firsthand.

Rice explains, “While visiting the jungle, I was amazed by all the beautiful and deadly creatures that are common there… poison dart frogs, venomous spiders and snakes, caiman, piranha; the list goes on and on. Nevertheless, there is another side to the Amazon, a wondrous and beautiful side that possesses an almost hypnotic power. I knew that such an amazing, exotic location would make the perfect setting for my next book. Combine that with the element of mystery (the vast majority of the jungle has yet to be explored, and amazing new species are being discovered there on an almost daily basis) and you have the perfect setting for a horror story. With so many movies, television shows, and books about the zombie apocalypse, I decided it was time to create an “origin” story to reveal where the living dead really come from… ”

James Michael Rice is the author of Rebel Angels, A Tough Act to Follow, The Still, and Pray for Darkness. He lives in Southeastern Massachusetts, and recently appeared in “The Bridgewater Triangle Documentary”, the first full-length documentary on New England’s own paranormal hotspot.