Plot: Joe and Bunnyman’s adventure continue in a rural ghost town. Bunnyman’s blood lust knows no bounds, as he slaughters indiscriminately anything that crosses his path.

My Tagline: “What Donny Darko should have been” 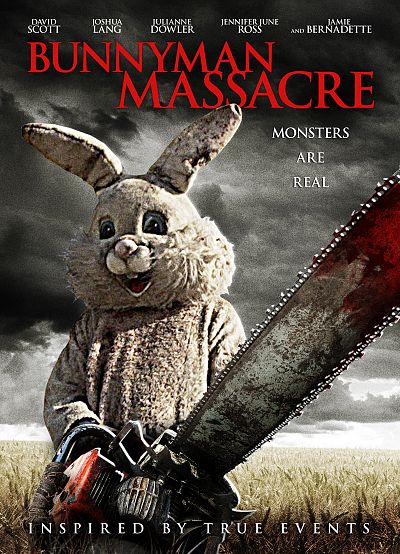 Review: A hillbilly and a deformed man dressed in a rabbit suit. What could go wrong 🙂 Bunnyman Massacre is the 2nd film in the series by Carl Lindbergh. Although I have not seen the first one yet (but working on it), I will say that if slasher flicks like Wolf Creek are your thing, then this is one film you will like. Although it is obvious that the budget was not as big as Wolf Creek (1 or 2), there is enough splatter and slaughtering of the naive to fill your blood lust…

The opening sequence were Bunnyman slaughters a bus load of kids was enough to show me that this is one film not the squeamish or anyone who can’t handle watching a film about deranged psychopaths hunt down scantily dressed women (or anyone else for that matter) and offing them because they’re in the mood that day.

Although some of the acting was very dull (such as when the bus driver shows no surprise when the girl slumps over dead at the bus stop, and not to forget the scene where you actually see the blond girl move her arm when she was supposed to be dead), it was good enough to make me want to sit through the 102 minutes of massacres.

If you are brave enough to watch this, then I wont tell you about the jerky. You can come to your own conclusions on that one 🙂

This was a well done film by Carl Lindbergh, and certainly was enough to make me want to see the first movie and the next one in the series.

Verdict – Switch off the lights and watch alone …. if you dare (adds to the chill factor)

C.A.Milson is an award winning horror author of 4 books (and counting); Founder of ASJ Publishing, and seldom film producer. He resides in Melbourne, Australia and likes to spend his time in his backyard hobbyfarm of 13 chooks, and draws inspiration from the horrors that lay in wait in the darkness. C.A.Milson can be found at: www.asjpublishing.com and: www.facebook.com/C.A.Milson.Author