Horror Addicts it’s time to give you an update on how the movie contest is going.

The below list is the list of the Top Ten so far from the user lists that have come from our listeners, and readers.

Do you agree with this list of Top Ten movies or do you feel your movies are missing? There isn’t a lot of movies from those who are fans of Foreign Horror Fans.

Well this is just a reminder it’s your time to get your top ten list into the email address of HAddictsmovies@gmail.com to get a chance of seeing one of your films listed.  The deadline is August 15th so time is running out.

Again all we want is your top ten films, year of release and country of origin.

We have had some great sample lists provided to us as examples so check them out.

They were provided by writer Kevin Glennon and Directors Philip Chidel and John Pata.

Now without further delay here is the list of films that have gotten the most repeat submissions and will be in the Top Ten.

Some films that are just short of the Top Ten.

The key thing to note about the above list of film so far is that most are from the US. I know we have fans of Foreign horror but nothing has really come in for those movies. So the challenge is on.

So get your personal list of Top Ten Horror Films released during form 2000 to end of 2011 into us as soon as you can.  Their are prizes at risk for those within the US and Canada, and for those overseas bragging rights to see one of your films listed.

Below is a guest Top Ten List along with some honorable mentions from one member of the writer/director pair behind the film Dead Weight.  John does a great job of going into his list and the fun of his list.  John was featured in an interview at the end of last seasons (6) on an interview regarding Dead Weight. The film was just reviewed in the season.

So below is John’s Top Ten List along with his Honorable Mentions.

I decided it was time just to get it the way I want it (for now, of course), and leave it at that. I’m sure there are plenty I spaced out on and left off the list, too. Now I am not saying that these are the BEST films of the 2000s, rather the ones I enjoyed the most. Be it for the craft, story, gore, scares or anything else really. Oh, and they are listed in alphabetical order. It was challenging enough to narrow it down to ten. I’ll be damned if I was going to attempt to rank them after that. However, I did select a “cream of the crop”, for what it’s worth. So, without further adieu…

I now present my Honorable Mentions:

The HIll Have Eyes

Often in movies we hear about these special gems, these labors of love, these all life encompassing films that come out and shock an audience. One of the most recent films of this type was the horror film Paranormal Activity that came out of nowhere and took audiences by storm. The film grew and grew from word of mouth and as horror fans know has spawned several sequels.

There is a little horror film that came out of Wisconsin that saw a nearly two year process become a film. The story began with a simple story idea between two friends that grew and later became their first feature film. The film is the brain child of John Pata and Adam Bartlett who used their love of horror to write and direct the film Dead Weight. If things role as I hope this film could find itself growing in the leaps that we saw Paranormal Activity take.

The story behind the films making in itself is a small miracle as John and Adam were able to use connections and friends to bring the film together. The cast could be called a risk taker as the main star Joe Belknap of the film is a first time actor. Others in the cast had everything from small experiences to some who were established actors. In all truth established actor Aaron Christensen even asked if there was a part available for his acting wife Michelle Courvais. Thankfully there was a role for her as she did play a key part in the film. How Dead Weight was put together is something that will surprise those who view the film and will raise questions about the human spirit as you watch.

Dead Weight starts on the funny side as we find a young man returning home, changing and making himself a bowl of cereal to eat. The fact that he took a risk on the milk for the cereal adds a bit of levity to the opening but things do not stay that light for long. As he’s sitting on his couch he begins to read a comic book when the phone rings. Sadly for one Charlie Russell (Belknap) it is a phone call he will never forget as it’s his girlfriend Samantha (Mary Lindberg) on the line. She has shattering news there’s an outbreak and the world is about to change around them.

This begins Charlie’s long trek to get to the city of Wausau, Wisconsin, and reunite with Samantha. We find him in the wilds of Wisconsin traveling with four additional companions. These brave individuals being the group leader Thomas (Christensen), the group’s lone female Meredith (Courvais) and two other men. The group stuck together and share their meager supplies as they travel. They do all they can to avoid those affected by the outbreak as they follow the lone map to Wausau. They have taken Charlie at his word that they will find help in Wausau and risk their lives to get there with him.

Along this trip we will see many ethical questions raised about ones humanity. We will get to watch as characters begin to slowly doubt each other, and that at times the infected are not the only danger. We have to question what would we be willing to do reunite with a loved one in this type of a world. Would we follow Charlie’s example or take other roads to get to our destination? There are other psychological questions to be answered as we watch the events unfold. The one true fact of the film is this; Charlie must get to Wausau no matter the cost. The other question between Samantha and Charlie which side will you find yourself in favor of as you watch their lives prior to the outbreak.

Dead Weight does an amazing job at presenting this story to the viewer. They are able to show the bleakness of the world through the lens and the way the way the film was framed. During the filming they shot in sequence so as things changed for the characters the cast also followed in those emotions. A sudden spring snowfall made for an additional element that helped show a passage of time that is important to the films progress. This is evident as some scenes the freshly fallen snow is seen melting in others.

Dead Weight is one of those films that you can tell was a labor of love. I was fortunate enough to be able to attend one of the first screenings of this special film. Listening to John and Adam thank those involved and tell the story of the film gets one infected for their love of the film. You will note I did not say their film as they men made a point to call it our film to those who were involved in its production, filming and now marketing. It’s a special to be involved in an event like that and I must add I got infected as well. It’s a film that I hope others go out of their way to find and to see. I am adding a personal note on how I have fallen in love with this film not just from that event but viewing the film itself.

At this time if you are interested in the film you can purchase it through their company at the below link. 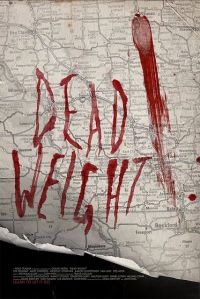 Many of you will not recognize the names of Adam Bartlett and John Pata, but these two men started a long collaboration process that has lead to their film, Dead Weight, which they hope to release in 2012. These two men were kind enough to give up some of their time and speak to Horror Addicts about their film.  The film is set in their home state of Wisconsin and the primary filming was done around places they may have called home. It is a personal hope that we here at Horror Addicts can say we where there at a start of the success of Dead Weight.  It was a pleasure speaking to both men and getting a sense of how much they love their work.

You can hear the full interview on the season finale of  http://www.horroraddicts.net

During the interview you will be able to find out about the process of the film and some of the locations used in the shooting.  There will even be a discussion about how they found the films mascot and the name for said mascot.  You will also get a glimpse of how much the film meant to Adam and John, and hopefully their passion when it comes to the film.  Some could say the way these two men speak of the film it’s as if it’s a beloved child.

If you’d like to learn more about the film, and see a trailer, you can check out their blog at Dead Weight Movie.