We surveyed our staff to see what Monsters scare them.

When I was maybe three or four, my dad was watching a show about the Golden Age of Hollywood on TV. This would be in the very early 60s. I sat down with him but when it showed Lon Chaney Jr changing into the Wolf Man, I ran out and hid under my bed. So, yeah, werewolves.

I HATE zombies. I don’t need hoards of the undead running after my tasty tasty brains, thank you. If the zombie apocalypse ever comes, I’m out!

The monster that scares me most is the Teke-Teke. It’s a Japanese Urban Legend about a kid who was cut in half by a high-speed train. The kid became the Teke-Teke, a creature without legs who drags what remains of its torso behind it. The torso makes a “tik-tik” sound so you know the creature is coming to get you and make you a Teke-Teke too.

The monster that scares me most is Old Baldy, the former caretaker of a camp I attended in the mountains of Northern California. You can hear him rustling through the trees at night waiting to kill campers and staff who cross his path.

What monsters scare you? Leave us a comment below!

How to Plan a Workshop
by Kate Nox

As an author, publisher, or event coordinator, you may be called upon to provide a workshop or in some way fill a time slot on a subject you know (expertise). You may be an expert in your field, but many of us have no idea how to pull a presentation together. This HOW Workshop will give you some guidelines to help you master this task with greater ease and aplomb.

Imagine with me:
You have been asked to provide a workshop for a group of 40 persons on a given subject.
You will have a time period of 40 minutes for your presentation.

Absolute step ONE:
Get the facts about what is desired by the group inviting you to present. Just like in the advertising class you took in college or high school, you get the 5 basics – Who, What, Where, When, How many?

Who – Is it a group of newbies to the subject or a group of your peers who will already know a bit or even more than you? You will want to tailor your information to your crowd.

What – is the subject the group is wanting you to present? Have they chosen a theme? (ie. Do they want your view on 14th century Ghost Exploration?)

When – is the workshop to take place? Include time and time frame. (40 minutes? 2 hours?)

Where – will it take place, what kind of room is the workshop to take place in? I once had to provide a craft workshop for 30 women sitting on half-log benches in a dusty outdoor amphitheater without electricity! Now is the time to find out if there will be projection equipment, a loudspeaker, or a podium.

How many – people will be in attendance? One of my pet peeves is attending a meeting or conference where there are not enough handouts for the crowd.

Step Two:
As soon as you get the topic plant it in your head – Tape it to your mirror, pin it to your car sun visor, log it on your phone, tack it on a bulletin board and exchange topics with a friend.
I have done these things for years and have even had several years of themes written where I can see them readily. I worked in a job where I was required to train and inspire people. Having the topic in my face frequently helped me to focus and catch the topic when I heard it or saw it elsewhere. It is amazing when reading an article in the newspaper or even seeing a billboard, or watching a TV show can spark an idea that becomes the direction for a presentation.

A friend of mine in a similar position and I always exchange what we are working on for the next year and often were able to provide information to help each other flesh out the post-it – notes on the mirror into a full presentation. I think we call that networking.

Step 3: Take a large piece of paper and just brainstorm. Write down everything you can think of that fits the subject. Cross off what is not helpful, then circle the important. Do your research, amass important information. Gather whatever you need to provide the information.

Step 4: After you have researched – Weed through and select the most important points you want to relay to your audience and write each on a 3×5 inch card.

Step 5: Use the cards to lay out the points in a logical flow toward your conclusion.

Step 6: Now that you have your topics and the information for each, work on connection lines. This is how you will get from one point to the next. These can be elaborate or as simple as “in light of that” or  “in conclusion”. This is one hint that will make you sound like the smoothest presenter on earth.

Step 7: Write your introduction last. You cannot know what you are about to say until you have decided what your information is.

Step 8: Talk it through with a timer and allow time for questions. The more you do this step, the more you will know your material and it will be more natural to talk about it.

Presenting a topic is a privilege. Enjoy your opportunity! 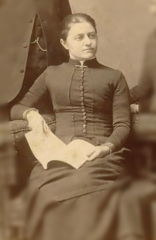 Millicent Washburn Shinn was the first woman to be awarded a Ph.D from the University of California at Berkeley.  She was an author and poet who took over editorship of Bret Harte’s Overland Monthly, a magazine about California. She also won renown as a psychologist in publishing her Biography of a Baby, from her research on the systematic development of an infant.

So how, you ask, might I have made her acquaintance?

As a program director and chaperone for a group of senior citizens, I made a lot of trips to interesting places. But the day I believe I met Millicent was one I will never forget.

This visit to the historical Shinn home in Fremont, California started like any other. The docent greeted us at the door and led us on a tour of the 1870 Victorian style house. Having finished the tour of the main floor, the docent led us up a narrow stairway to the second floor.

As was my practice, I allowed all the seniors to precede up the stairs and into the room because I was younger and more able to hear the docent’s spiel from outside the room. I then let the seniors exit the room and entered myself to see what they had just viewed and heard about.

The first room at the top of the stairs was your average farmhouse room, pretty stark and nothing very remarkable, except for some clothing hanging on the inside of an open closet door. Because I often work with costumes, I take every opportunity to educate myself on the correctness of what people wore in any time period.

I approached the closet and as I rounded the end of the bed, I got the impression someone was following me. My heart lept inside my chest. In my mind I viewed a young woman in a black dress. I knew when I turned around she would be there, but there was no one.

I shrugged my shoulders and continued forward thinking to examine the buttons on the first dress. Suddenly, I could not breathe. Not outloud, but in my brain I heard a female voice shouting emphatically,  “Get out! Get out! Get out!”  I left the bedroom quickly without looking back, knowing I would be in danger if I did not.

I didn’t want to frighten the members of the tour group, so I fell in behind them and waited until the tour guide had invited them to explore the upstairs library on their own. I then took her aside and asked if there had been unusual occurrences in the house?

She smiled and asked me if I felt something. I relayed to her that I felt a presence warning me to leave the closet area. She then told me she knew I would feel something when she saw me coming up the stairs.

“Some people are just more sensitive, I could see it in your face.”  She went on to say, workers preparing the house for viewing had several experiences of hearing someone upstairs while they were all working downstairs, but when they went up to check, they found no one there.

One day, after locking up the house, some of the workmen were walking to the parking lot together and heard pounding. Looking up at the window on the second floor, they saw a young girl inside the house. Deciding a child had gotten into the house, two of the workers went back into the house to get her out and send her home before leaving for the night. They spent quite a bit of time calling out and looking into every closet and room but found no child in the house. They felt it was the ghost of a small girl who had fallen from an attic window and died.

Others had felt something in that front bedroom–though not necessarily a young woman’s presence as I had felt and many photographers had found strange orb-like figures in their pictures of the house and grounds.

The docent showed me a clock on a shelf in the front hall near the door. The clock was one which needed wound with a key kept on a shelf inside its cabinet. She said that every day as they left the house, staff made sure to wind the clock, check the time, and latch the cabinet. On numerous mornings when coming back into the house, they found the cabinet standing open and the time changed on the clock.

Needless to say, none of her stories made me feel very comfortable or gave me the desire to return, but I have often wondered who the woman whose presence I felt so frighteningly might have been.

Recently, I decided to write about my experience and visited several websites to reacquaint myself with the layout of the house and remember the significance of the family who had lived there. It was then that I learned about Millicent.

After having pursued her education, worked with early childhood development, and the magazine, she returned home and — as the only female child, took on the societal norms of the times. She bore responsibility to take care of her invalid mother, the household, and to help care for her brother’s children.

Some writers I found espoused the opinion that she did so grudgingly, and may have felt trapped, leaving me to wonder if that was the reason for the anger when I wandered too far into the room?

In the actual history of the family, there are no reports of her begrudging her life on the family farm. I imagine she felt protective over her mother, the children, and the house. Did she see me as one of the children foraging too far into the room and become afraid I might wake her ailing mother? Or had she simply grown tired of people poking about the place and, since I was alone, decided to make her point?

Whatever the reason, and whether or not it was indeed Millicent, or another woman of the past, the message was quite clear and I made up my mind then and there never to visit again for fear of further frightening encounters that might not end well for me!

If you would like to take your chance at an encounter,  you may visit the Shinn Historical Park and Arboretum