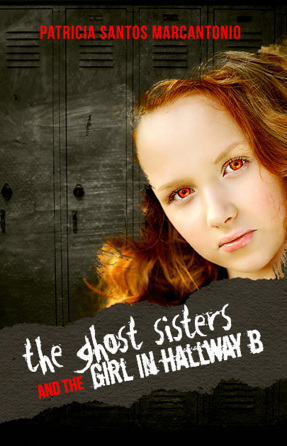 Kat and Marie Bench are not like other girls, they may be interested in make-up and boys but they are also obsessed with ghosts. They love telling ghost stories, they read all the books about ghosts that they can find, they watch movies about ghosts and TV shows about ghost hunters. They even have a blog called the ghost sisters and hope to become ghost hunters and see one someday.

The ghost girls along with their divorced mom have just moved to Pueblo Colorado and will start school at Apache Middle School. Starting at a new school can be hard and classes at Apache are even harder because the ghost of a young girl haunts the hallways. She opens lockers and slams them shut, makes the lights flicker, leaves mysterious messages around school and can be heard crying and shrieking. Kat and Marie’s dreams of seeing a ghost are about to come true and their career as ghost hunters are just beginning. Hopefully they can find out why the ghost is there and save the school from any further damage.

The Ghost Sisters And The Girl In Hallway B by Patricia Santos Marcantonio may be a Y.A. novel that is meant for kids but it’s a story that adults will like also. Despite me not being the intended audience for this book, I really enjoyed it because a good story is a good story and I like anything that has to do with the supernatural. I also liked the ghost sisters and wanted to see how they dealt with a real ghost. Kids will love this book because they will be able to relate to the problems that these middle school kids are dealing with.  I liked that the girls have to deal with going to a new school because of a divorce which is something lots of kids deal with. These girls deal with it well though thanks to a passion for ghosts.

There was a lot to like about this book, in particular I liked when we first meed the ghost sisters and they talk about their love of the supernatural. Though I have to say my favorite part of The Ghost Sisters And The Girl In Hallway B was the message on how bullying affects kids. In the book Kat and Marie have a friend named Trini who has to deal with bullying.  I liked that Trini doesn’t want to tell adults about the bullying because she is embarrassed about it. Its pretty normal for a kid to not want to admit to being bullied and I liked seeing how Kat, Marie and the adults in their lives deal with the problem.

The Ghost Sisters And The Girl In Hallway B is everything you would want a YA novel to be, there is a good mystery to it, some scenes with ghosts that kids will really like and some good humor. One of the funniest parts was when one of the sisters says that 10 years was so long ago and the other sister says “In adult time that’s not very long.” Patricia seems to really know how young kids think. I hope this is the beginning of a series so we can have more adventures with The Ghost Sisters.